Nebraska 'D' knows it must plug leaks to play with Buckeyes 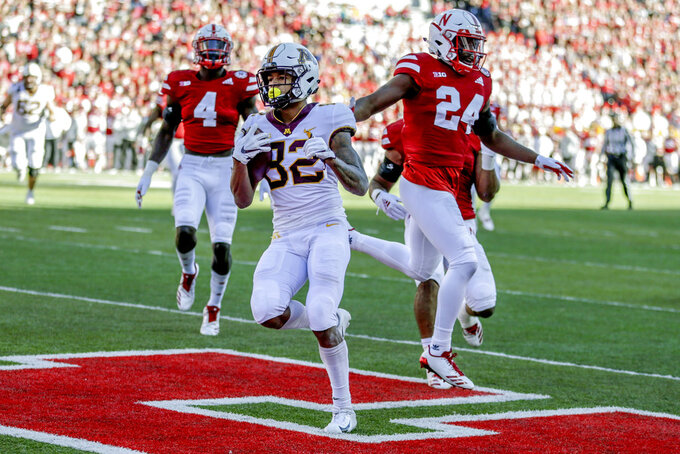 In this Oct. 20, 2018 photo, Minnesota wide receiver Demetrius Douglas (82) scores a touchdown in front of Nebraska defensive backs Avery Anderson (4) Aaron Williams (24), during the first half of an NCAA college football game in Lincoln, Neb. Nebraska's defense goes on the road to face one of the most explosive teams in the nation in No. 8 Ohio State after a middling performance against a mediocre FCS offense in Bethune-Cookman. (AP Photo/Nati Harnik)

LINCOLN, Neb. (AP) — Nebraska's defense will go from playing against a middling FCS offense to one that ranks third in the Bowl Subdivision and has been held under 500 yards just once all season.

Even though the starters allowed three points and had three takeaways in a 45-9 win over Bethune-Cookman , Nebraska (2-6, 1-4 Big Ten) so far this season has shown no evidence it will be capable of slowing down Dwayne Haskins and No. 8 Ohio State (7-1, 4-1) in Columbus on Saturday.

The Cornhuskers' defensive average of 438 yards per game is second-to-last in the Big Ten, they've allowed 14 touchdown drives of longer than 70 yards, and Rutgers and Illinois are the only conference teams to have given up more than the 14 plays of at least 40 yards Nebraska has surrendered.

"This is all a process. There's growth," first-year coach Scott Frost said Monday. "I think our defense has continued to get better. We're playing an elite team on Saturday. We've played several teams that are really good and for sure one elite team already this year, and we weren't ready for that challenge earlier in the year. I hope the team is a lot more prepared and a lot more confident going into this one."

The elite team Frost mentioned was Michigan, which had three plays of 40 yards or longer in addition to a 60-yard punt return for a touchdown in a 56-10 Nebraska loss.

Frost has said all season the Huskers are short of depth, and he accepts he'll have to bide his time while talent is built up through recruiting. Six starters from the Big Ten's worst defense in 2017 are still starting.

There also is some give-and-take with the Huskers' up-tempo offensive style. Quick strikes on offense mean the defense is back on the field after getting little rest.

Bethune-Cookman came into Lincoln averaging 365 yards per game to rank 75th in the Football Championship Subdivision. The Wildcats played their backup quarterback because their starter was injured, and they generated 270 of their 355 yards and averaged 5.3 yards per play against the Huskers' starting defense and a mix of starters and second-stringers.

The Wildcats had nine plays that went at least 9 yards against the top defenders, including passes of 54, 26 and 40, and they had non-scoring possessions that penetrated to the Nebraska 23-, 8- and 14-yard lines.

"They got a couple chunk plays off mental errors, just us not completely executing how we're supposed to," cornerback Dicaprio Bootle said. "At the end of every one of those chunk plays there was an effort guy always running behind the ball making the stop and getting us back into position where we can stall the drive again. We went over a lot of those plays this morning. They're not anything we can't get fixed. It's not really too alarming."

Linebacker Mohamed Barry said he doesn't read a lot into the Bethune-Cookman game. He said it was difficult for him and his teammates to be as mentally prepared against a lower division as they would have been if they had been playing a FBS opponent.

"That's why those (big) plays happened," he said. "You would be crazy if you think against Ohio State, if you mess up on a play, that it won't go 60 yards for a touchdown. It's going to be different when you talk about how we focus for this game."

The Buckeyes had an open date following their 49-20 loss at unranked Purdue. Ohio State has not lost back-to-back regular-season games under seventh-year coach Urban Meyer. Last year, after losing 55-24 at unranked Iowa, the Buckeyes hammered No. 15 Michigan State 48-3 at home.

Recent history in the series with Ohio State has not been kind to the Huskers. The Buckeyes have won three straight by lopsided margins, including 56-14 in Lincoln last year and 62-3 in Columbus in 2016.

"I remember everything about the last couple years we played these guys," linebacker Luke Gifford said, "and it needs to be different."