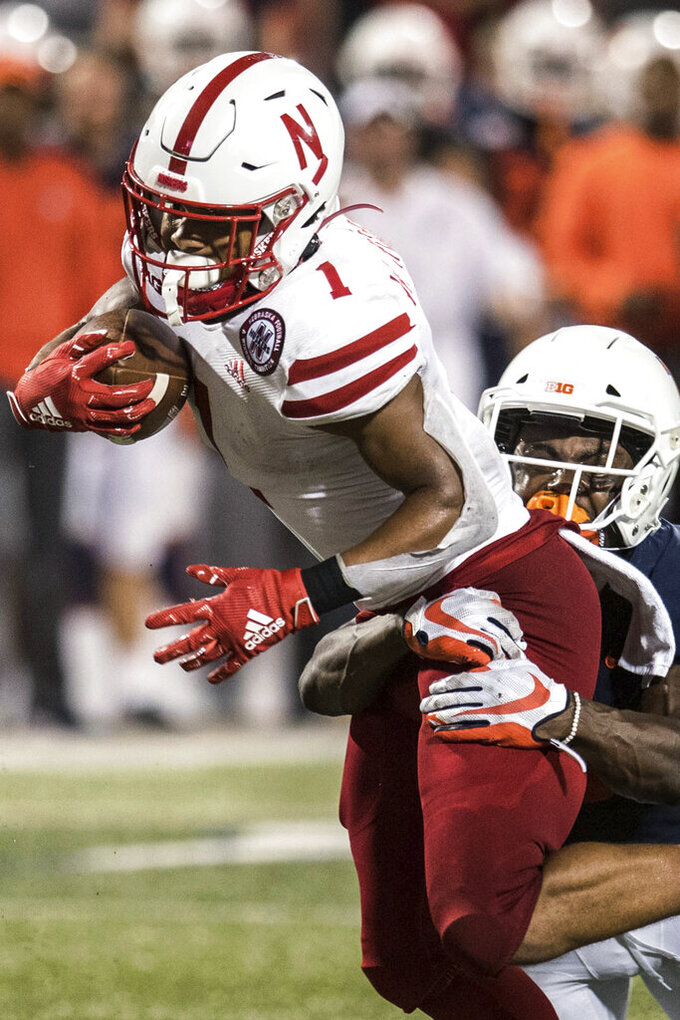 LINCOLN, Neb. (AP) — His team down two touchdowns late in the third quarter on the road, Nebraska freshman Wan'Dale Robinson figured it was time to have a quick word with the head coach.

As Scott Frost recounted Monday, Robinson's message was this: "Get me the ball. I got you."

Frost got him the ball, all right. Robinson, who lines up at both receiver and running back, had 22 of his 27 touches in the second half and scored the winning touchdown in the Cornhuskers' 42-38 win over Illinois on Saturday.

"I feel if the game is on the line, I'm always going to take myself over really just about anybody," he said.

Did he violate any of the sport's protocol, being a rookie and asking for the ball? He doesn't think so.

Robinson, obviously, is supremely confident, and able to back it up. He was the highest-rated player in Nebraska's class of 2019 — a 5-foot-10, 190-pound speedster out of the mold of Purdue star do-it-all man Rondale Moore. The two grew up less than an hour apart — Robinson in Frankfort, Kentucky, and Moore in the Louisville area — and they trained together in high school.

"Our names are similar, we're built the same, we play alike," Moore said last summer. "We have a lot in common."

Robinson turned down an offer to join Moore at Purdue. He also said no to Alabama, Michigan, Ohio State and Kentucky.

"I loved the people here," he said. "That was a big reason I came here. Everybody was so caring and loving. Just everything about this place I love."

Robinson might not be in Lincoln if it weren't for safety Cam Taylor-Britt, who hosted him on his recruiting visit. Robinson originally pledged to Kentucky, but Taylor-Britt helped swing him back to Nebraska (3-1, 1-0 Big Ten) through a series of texts.

Taylor-Britt was as happy as anyone about Robinson's second half against Illinois.

"It was really time to let him off the leash," Taylor-Britt said. "Not saying that he's a dog or anything, but at the end of the day, he's a dog. I'm so happy I recruited him."

"No, I'm still going to call what I think I need to call to make the offense go," Frost said. "He got more touches than we expected because of guys getting dinged up at running back. He did some special things when we got him the rock."

Robinson was called on mostly at running back. Starter Maurice Washington didn't play in the second half because of injury and top backup Dedrick Mills also was hurt but stayed in the game.

Robinson, who had a total of eight carries in the first three games, ran 19 times for 89 yards. All but one of his runs came in the second half.

With Nebraska trailing 35-21 in the third quarter, Robinson broke a 21-yard run and carried three more times during a nine-play touchdown drive that pulled the Huskers within eight.

He ran three times on the six-play drive that tied it and had six more touches and scored the go-ahead TD on the 11-play, 75-yard march that followed.

Robinson finished with 186 all-purpose yards and three touchdowns and was named Big Ten freshman of the week.

"We could tell we had a special one in Wan'Dale right way when he got here last spring," Frost said. "He had a couple injuries through spring and fall camp, so I'm not sure we saw everything he could do. But we kind of knew it was a matter of time before he became one of those guys who could be a real weapon for us. It was good to see that happen Saturday."

Robinson will enter this week's home game against fifth-ranked Ohio State (4-0, 1-0) as the Big Ten freshman leader in all-purpose yards (102.3 yards per game) and freshman co-leader in receptions (4.3 average).

"If he keeps playing like that," Frost said, "we have to create ways to make sure he touches the ball a certain amount of times. I don't know how many he can handle, but he's going to make us better."