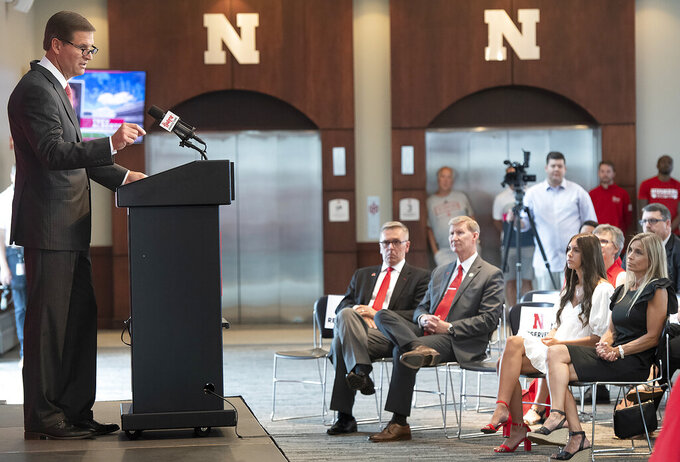 Trev Alberts speaks, as as his family, including wife Angie, right, and daughter Breanna, listen on after he was is introduced as Nebraska's new athletic director during a news conference, Wednesday, July 14, 2021, at Memorial Stadium in Lincoln, Neb. (Gwyneth Roberts/Lincoln Journal Star via AP) 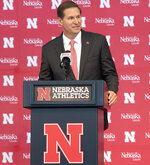 LINCOLN, Neb. (AP) — Nebraska hired Trev Alberts as its new athletic director Wednesday, hoping a star from the school's glory years can restore what was once among the nation's most dominant football programs.

Alberts, the athletic director at the University of Nebraska-Omaha, will fill the job that opened with last month's retirement of Bill Moos. At a news conference at Memorial Stadium, an emotional Alberts alluded to his time in Lincoln and promised to work collaboratively.

“Other than my faith and my family, everything I have materially and otherwise is a result of an opportunity to be a student at the University of Nebraska," he said. “I don't take this responsibility lightly.”

Alberts will start his new job Monday, weeks after Moos abruptly announced his retirement. Moos, the athletic director for three years, had 18 months left on his contract.

Alberts was an All-American at Nebraska, playing from 1990 to 1993 and winning the Dick Butkus and Jack Lambert awards as the top college linebacker along the way. He was the fifth overall pick in the 1994 NFL draft but retired in 1997 after three injury-plagued seasons for the Indianapolis Colts.

He voiced support for another former Husker, football coach Scott Frost, who is off to a lackluster start in his return to Lincoln. Nebraska has posted four straight losing seasons overall and has rarely been a factor in the Big Ten race much less the national championship runs Cornhusker fans becamse accustomed to a generation ago.

Alberts pledged never to micromanage the football program, focusing instead on big-picture concerns in the department.

“I want to be helpful,” he said. “I will not call a play. I don’t tell coaches who to recruit.”

University of Nebraska President Ted Carter said Alberts has proven to be a strong leader at UNO, and his 12-year tenure there showed his longevity and commitment to the state.

Alberts said his goal over the next two to three years is to expand the trust, unity and work ethic within the athletic department.

“We have to be the hardest-working athletic department in the country,” he said. “That's something we can control.”

Alberts said it was important to establish a diverse, inclusive department and to focus on the needs of its athletes. He said the department needs to be “comfortable being uncomfortable” as college sports changes and students get new opportunities to make money off their fame and celebrity.

Alberts has had to make tough decisions before, including his move to cut UNO's football and wrestling programs. Alberts, who turns 51 next month, also worked at ESPN before becoming UNO’s athletic director in 2009.

University of Nebraska-Lincoln Chancellor Ronnie Green said Alberts stood out from a field of more than 25 applicants, both internally and from around the country.

“Trev knows what it means to put everything you've got into competition and to succeed at the highest level," Green said.