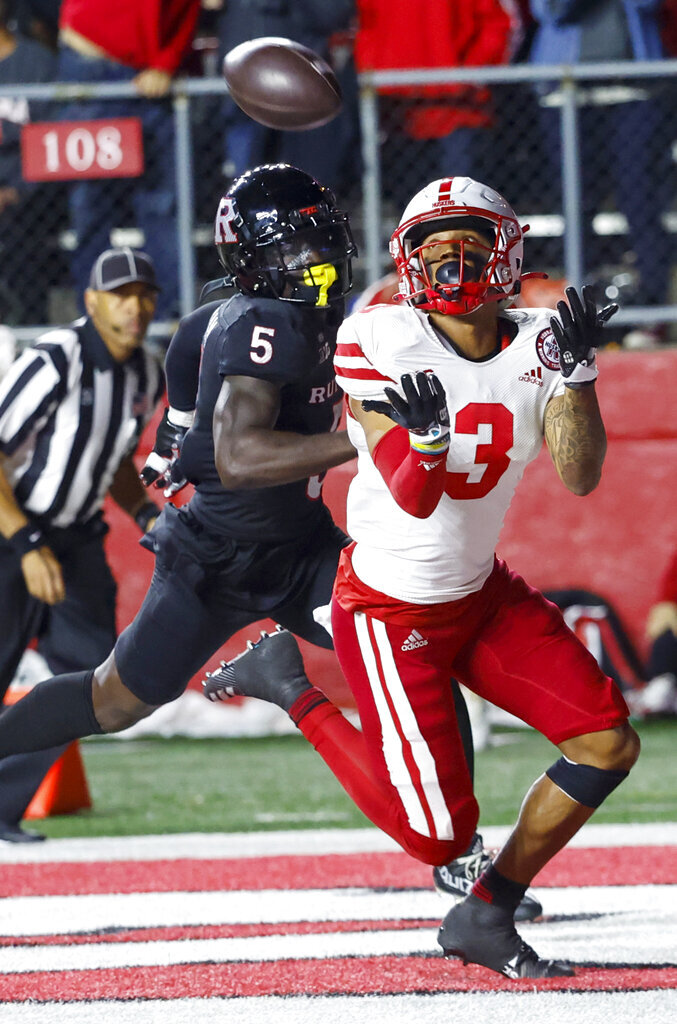 Line: Purdue by 13 1/2, according to FanDuel Sportsbook.

Purdue and Nebraska are tied with Illinois at the top of the Big Ten West standings, and the winner of this game would come out of the weekend alone in first place if Minnesota knocks off the Illini. Purdue has won three in a row, and both losses came on scores in the final minute. The Cornhuskers have rebounded nicely under interim coach Mickey Joseph and are going for their first three-game winning streak since coach Mike Riley's 2016 team started 7-0.

Nebraska's pass rush vs. Purdue QB Aidan O'Connell. The Huskers jumped back into division contention thanks largely to a rapidly improving pass rush. Nebraska had a total of six sacks against Rutgers and Indiana and will need to put more pressure O'Connell to overcome a suspect secondary. Purdue's sixth-year quarterback, meanwhile, has been sacked seven times, thrown four interceptions and lost one fumble in two games since returning from an upper body injury.

Nebraska: WR Trey Palmer. With 40 catches, he's tied for the most in school history through six games and is second in the conference behind Boilermakers WR Charlie Jones (50). Palmer has become one of the league's top deep threats with five receptions for 30 or more yards.

Purdue: TE Payne Durham. His emergence as a bigger threat in Purdue's passing game has provided a solid compliment to Jones. If he can replicate the seven-catch, 109-yard, one touchdown game he had last week against Maryland, the Boilermakers' offense should continue to get even better.

Nebraska has won three of the last four in this series. ... Purdue is 2-2 in one-possession games and has scored 35 points off turnovers. ... The Huskers have pitched second-half shutouts each of the past two weeks and have scored a touchdown on their opening possession in six of their last eight games. .... The Boilermakers have held four of six opponents to fewer than 100 yards rushing. .... Only five FBS teams have a 500-yard rusher and a 500-yard receiver in 2022. Nebraska is one of those with Anthony Grant and Palmer. ... O'Connell has thrown for 200 or more yards in 19 of 20 career starts and needs 124 yards to pass Jim Everett (7,411 yards) for seventh on the school's career list. ... Cornhuskers QB Casey Thompson is completing 69.4% of his third-down throws, No. 17 in the FBS. ... Durham needs one TD catch to move into the top 10 in Purdue history.