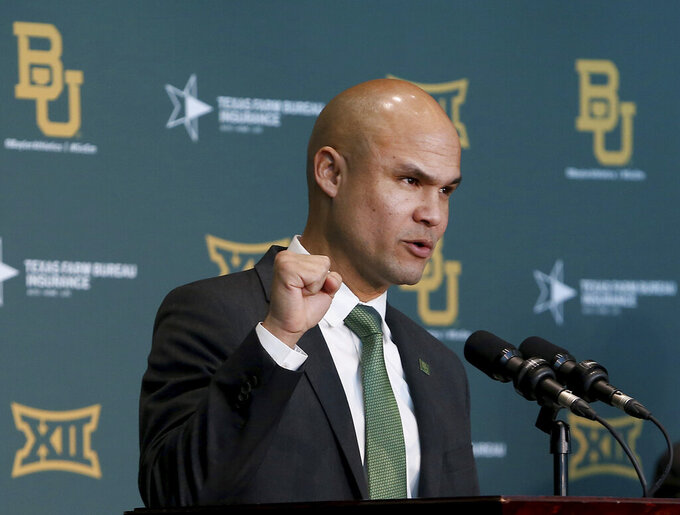 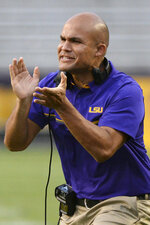 WACO, Texas (AP) — Dave Aranda sensed something special about Baylor even before the Bears were looking for a new head coach.

Baylor is now his team.

“When this job came open, I said this is in my heart, this is me,” said Aranda, who was formally introduced as coach of the Bears on Monday, four days after being hired as a first-time head coach and a week after LSU finished its 15-0 season. “I feel like this is God talking to me.”

Matt Rhule became head coach of the NFL’s Carolina Panthers on Jan. 7, after taking the Bears from an 1-11 record in his 2017 debut to 11 wins this season. Baylor played in its first Big 12 championship game and the Sugar Bowl before being ranked 13th in the final AP Top 25 poll.

Athletic director Mack Rhoades had to cut short a vacation to the mountains with his wife, and he was in a tiny office in a regional airport in New Mexico on his way home Jan. 9 when he first spoke by phone with Aranda. That was four days before the national championship game.

A standing-room-only crowd filled the Baylor Club inside the school's football stadium for the introduction Monday. The team, including returning starting quarterback Charlie Brewer, sat together on one side of the room.

“He’s won at the highest level. He’s done something that very few people have done,” Brewer said. “Coach Rhule did a lot for this university and I have a ton of respect for him. Coach Aranda coming in, I think will have that same amount of respect. I think he’s really going to take it to the next level and I think everyone’s real excited."

Aranda told the players that he “wanted to earn their trust" and be a part of them.

The 43-year-old Aranda, who got a reported six-year contract, takes over a much different Baylor program than Rhule, who arrived from Temple to a depleted roster and turmoil in the wake of the sprawling sexual assault scandal at the private Baptist school that led to the firing in May 2016 of two-time Big 12 champion coach Art Briles.

The NCAA still hasn't issued any rulings on its investigation of the case, and there could still be penalties. Aranda said Rhoades and Baylor officials have been transparent with him about where things stand, and he is comfortable with that.

Aranda said he was still in the process of hiring his Baylor staff and was working to keep on staff Joey McGuire, the former three-time Texas high school state champion coach who was associate head coach under Rhule and the interim head coach for 10 days.

While he was a Power Five defensive coordinator the past seven seasons, at Wisconsin from 2013-15 before his four seasons at LSU, Aranda doesn't plan to call defensive plays for the Bears. Baylor's defense was drastically improved this season but had seven senior starters, and All-America defensive end James Lynch is one of two juniors who already said they were leaving early for the NFL draft.

This isn't Aranda's first time in Texas. His was graduate assistant at Texas Tech for Mike Leach from 2000-02, and he spent the following two seasons as linebackers coach at Houston for Briles.

There is also his connection to three current Big 12 head coaches: He was college roommates at Cal Lutheran in the late 1990s with Texas coach Tom Herman, was Utah State's defensive coordinator in 2012 when Texas Tech coach Matt Wells was offensive coordinator there and was hired at LSU by Les Miles, now the Kansas coach.

Aranda spoke a few days ago to Rhule, a coach he had wanted to visit in the past. He previously watched videos online of Rhule's motivational talks with the team.

“Here's a guy that's doing it the right way, here's a guy that I would aspire to be. And so when I had the chance to talk to him, it was really fulfilling for me," Aranda said. “And you could tell right away, such a great person. He has built such a great foundation here. I'm excited about taking the next step in that foundation and furthering the progress that he's made."