New coaches at Kansas, K-State are studies in contrast 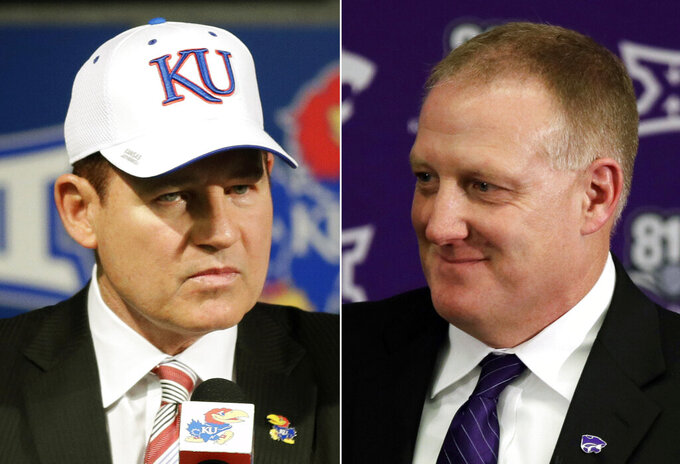 TOPEKA, Kan. (AP) — About the only thing the football programs at Kansas and Kansas State have had in common much of the past three decades is the often desolate stretch of Interstate 70 that connects them.

The Jayhawks have the proud tradition of John Riggins and Gale Sayers, yet recent success has been so scant that they've churned through five coaches in the past 10 years. The Wildcats had virtually no tradition until Bill Snyder arrived, and he built a consistent winner tucked away in the Flint Hills.

Kansas settled on 65-year-old Les Miles, the "Mad Hatter" with Big 12 success at Oklahoma State and a national title at LSU on his resume. The quirky, defensive-minded coach known for nibbling grass and his recent foray into films has personality, energy and experience on his side.

Kansas State went with Chris Klieman, the 51-year-old former North Dakota State coach whose only experience at the Football Bowl Subdivision level came 22 years ago — a single season as an assistant at Kansas. Yet the blue-collar, hard-working Klieman proved his coaching chops at North Dakota State, where in five seasons he went 69-6 and won four Football Championship Subdivision national titles.

"I don't know what it was like a year ago. Everybody asks me about what it was," Klieman told The Associated Press in a wide-ranging interview. "I know what we're trying to instill here. Guys taking ownership of the program, guys getting invested in the program. It's their program. We're just guiding them. I want them to have input. I want them to have ownership. What was, I don't know."

So maybe Klieman and Miles aren't quite polar opposites.

"I think our players anticipated there being a new feeling," Miles said. "I think it's going to be a challenge to win games and win championships, but yeah, we're ready for that challenge."

To be sure, Miles understands the gargantuan task ahead of him.

Kansas hasn't been to a bowl game since 2008, the penultimate season of Mark Mangino's stunningly successful tenure. That was also the last time the Jayhawks won more than five games, let alone had a winning season. Four times in the intervening years they've won two games or fewer.

With losses along the way to the likes of Nicholls State, South Dakota State and seemingly every school in the Mid-America Conference, the Jayhawks had become not just the laughingstock of the state or the Big 12, they were the butt of jokes nationwide. Rarely did more than 15,000 fans show up to Memorial Stadium for home games, and even more rarely did anybody stick around for the second half.

Kansas has tried just about every avenue to land a winning coach, too.

There was Turner Gill, the former Big 12 quarterback who had turned around lowly Buffalo. There was the well-known Charlie Weis, who once led Notre Dame to back-to-back BCS bowl games. There was David Beaty, the career assistant with ties to the successful Mangino era.

So when athletic director Jeff Long went searching for the next coach, he settled on an old friend with a record of success in the Big 12 and the kind of gravitas it takes to recruit to Kansas.

"He's built programs in the past. So when you're out and you want back in, you can feel the passion in the conversation," Long said. "From my view, for Les at this point in his career, the opportunity to step in and build a program — and rebuild us — and take us to a level of successful football was exciting to him and made a lot of sense for me to choose him."

Much like Long tapped a longtime friend, so did Kansas State athletic director Gene Taylor. Only he wasn't replacing a string of failed head coaches. Instead, he was replacing the winningest coach in school history, one whose statue stands outside the stadium that bears his name.

Klieman understands the magnitude of what faces him, too. It may be a different kind of pressure from what Miles is under at Kansas, but it is no less pervasive and likely just as suffocating.

"It's still about people. It's still about blocking and tackling and knowing your assignments," said Klieman, who just over a decade ago was coaching Loras, a Division III school. "I don't care if you're that division or the NFL, what you're trying to do is get guys in position to be successful."

Klieman did that with aplomb at North Dakota State, where the expectation every fall was to win the national championship. He did that four times, losing in the national semifinals the other year, and along the way beat Power Five schools Iowa and Iowa State on the road.

In a delicious bit of irony, the year before he took over Klieman was on Craig Bohl's staff when the Bison rolled into Manhattan and beat Snyder's team to open the 2013 season.

Yet in many ways Klieman is the perfect fit at Kansas State, where hard work and perseverance are valued more than most places. Those are traits Snyder instilled in the program when he first arrived in 1988, and set about rebuilding arguably the worst program in college football history.

"Fundamentally there's more similarities between them than differences," said quarterback coach Collin Klein, a Heisman Trophy finalist under Snyder. "I think the style and organization of meetings and walkthroughs during our camp, getting our guys physically ready, that's all very similar.

"I know Coach Klieman's approach is being 1-0 today," Klein continued, "and stacking good days on top of each other is something that has been preached here a long time."

There have been more good days than bad at Kansas State lately, and Klieman's job is to sustain and build upon Snyder's success: 215 wins, 18 bowl games, rarely a losing season.

It's a much different challenge than the new coach at rival Kansas faces, but one no less daunting.

"There's nothing that surprises me anymore with the number of years and the head coaching opportunities I've had," Miles said. "I know what's coming. I know what to expect from my players and coaches. I kind of anticipated where we would be, and to be honest, so far I've been pleased."