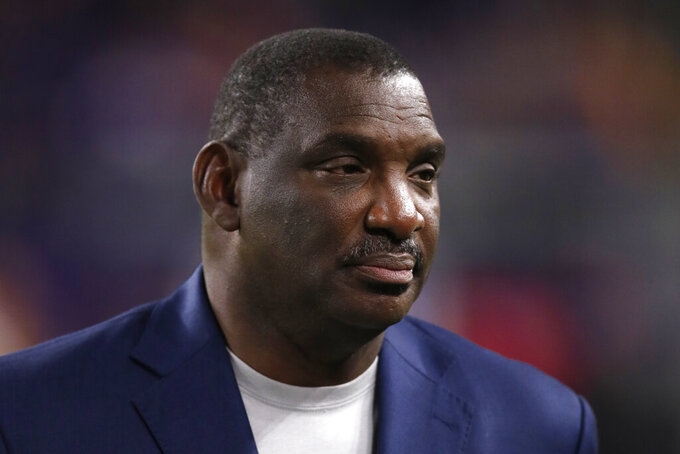 FILE - Washington Redskins Senior Vice President of Player Personnel Doug Williams walks the sidelines before an NFL football game between the Washington Redskins and the Minnesota Vikings, Thursday, Oct. 24, 2019, in Minneapolis. The inaugural Legacy Bowl in New Orleans is giving top football players from historically black colleges and universities a new level of exposure to pro scouts and executives. The Legacy Bowl is the brainchild of former NFL quarterbacks Doug Williams and James “Shack” Harris, who both played at Grambling. (AP Photo/Jeff Haynes, File)

NEW ORLEANS (AP) — South Carolina State defensive back Zafir Kelly has spent this week at a downtown, high-rise hotel that has hosted events tied to the Super Bowl and NBA All-Star Game, mingling with NFL scouts in the evenings and preparing to play nationally televised game alongside NFL draft-eligible players who, like him, chose to attend a historically Black college.

The inaugural Legacy Bowl, which kicks off on Saturday afternoon on NFL Network, will “even the playing field for us,” said Kelly. ”We get the short end of the stick because of where we play at. It’s definitely a great opportunity. You see the scouts around, TV, so more exposure.”

Exposure is something HBCU's have been aggressively pursuing lately — successfully so, and not just in football.

In the hours before the Legacy Bowl kicks off in New Orleans, the Morgan State and Howard basketball teams will clash in the nationally televised NBA HBCU Classic, held this year in Cleveland in conjunction with NBA All-Star weekend.

And earlier this month, the Senior Bowl in Mobile, Alabama, hosted a promotional HBCU tent village and a first-of-its-kind combine specifically for HBCU players.

The Legacy Bowl is the brainchild of former NFL quarterbacks Doug Williams and James “Shack” Harris, who both played at Grambling. There was a time when Grambling produced numerous NFL prospects who'd honed their skills in college under legendary coach Eddie Robinson.

But last year, not one HBCU player was drafted. That bothered Williams and Harris.

"There is no way in the world that out of all the Black colleges that play football, there isn’t a player good enough to be on somebody’s practice squad or 53-man roster,” Williams said.

While the most prominent HBCU programs play at the Football Championship Subdivision level, others, such as Bowie State, play in Division II. Some top players at that level also were invited to play in the Legacy Bowl.

The game will be held at Tulane's Yulman Stadium, which also hosted practices. The New Orleans Saints offered use of their indoor field during rainy, windy weather late this week.

Saints assistant general manager and director of college scouting Jeff Ireland said the Legacy Bowl is “crucial and critical and absolutely something that's been needed for some time.”

“I don’t think we've gotten enough exposure to these HBCU players, especially the last couple years because of COVID,” Ireland said. “There are always great players at HBCUs — hidden gems, you've just got to uncover them.”

The Saints did just that when they drafted multiple-time Pro Bowl left tackle Terron Armstead out of Arkansas-Pine Bluff in 2013.

While scouts regularly fan out to individual HBCUs and bring back reports to NFL front offices, the Legacy Bowl gives the more major decision-makers a chance to see players perform in person — and to meet them, Ireland noted.

“You see them as athletes, what their body type is — length, bulk, how they’re developed,” Ireland said. “We talked to a couple kids after practice, getting a chance to hear their story.”

The Legacy Bowl also has drawn representatives from the CFL and the temporarily dormant XFL, which plans to resume play in February 2023.

Doug Whaley, the XFL's senior vice president of player personnel, watched practice and mingled with players' agents “to let them know we will be an option for them in their football future."

Whaley said he was impressed by the resources dedicated to the event.

“They were prepared to make sure those players got a fair shake and scouts were able to do their job,” Whaley said. “It was a good way to get them competing against each other and show what they can do in professional setting.”

Kelly said the Legacy Bowl “will definitely change the game” in terms of raising the profile of the HBCU brand of football.

“I feel like there’s great players coming out of HBCUs,” Kelly said. "And further on in the future, when they get an opportunity here, they won’t get overlooked.”