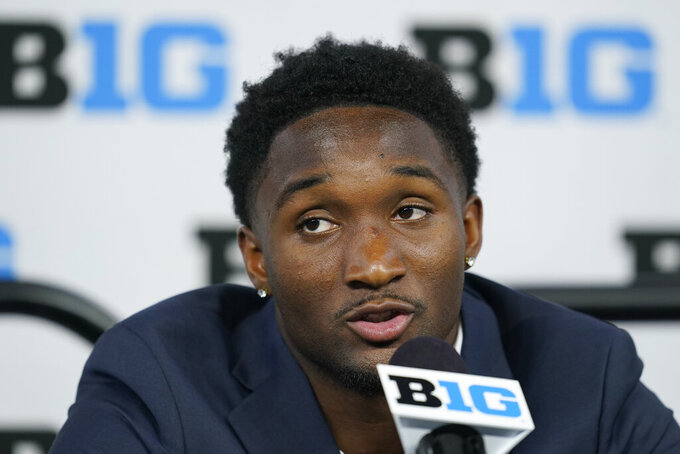 Bret Bielema offered Illinois fans a ray of hope by going 5-7 in a 2021 debut campaign highlighted by a nine-overtime win at Penn State and the first victory over rival Northwestern since 2014.

Getting the Illini to a bowl game is among the next challenges for a team that returns just six starters on each side of the ball.

“Just knowing our roster, not that I didn’t like our roster a year ago, it’s just you’re more comfortable,” Bielema said. “You know their strengths, you know their weaknesses, you know how they handle moments.”

The offense will look markedly different when Illinois opens the season at home against Wyoming on Aug. 27 after Bielema tapped former UTSA offensive coordinator Barry Lunney Jr. to take over for Tony Petersen following a dismal passing attack in 2021.

When it comes to the bottom line, Bielema alluded to an internal “buzz” around the program, picked to finish sixth in the Big Ten West Division, according to one media poll.

“As far as predictions,” Bielema said, “I leave that to the outside world.”

Syracuse transfer Tommy DeVito is seeking the starting quarterback job over Artur Sitkowski, who missed spring practice after offseason surgeries on his throwing shoulder and non-throwing arm. Sitkowski and Brandon Peters struggled mightily in 2021, completing just 51.2% of passes and averaging 156.2 passing yards per game, both worst in the Big Ten.

“We’re starting to see the fruits of our labor with (the passing game) right now,” DeVito told reporters during camp. “It’s awesome to see guys hungry to learn and want to be better.”

Converted wide receiver Isaiah Williams is a capable No. 1 target after making 47 catches for 525 yards and four scores in 2021. He will need some help, which could come from returning wideouts Casey Washington and Bryan Hightower, who have both flashed potential.

DeVito’s playmaking potential could be crucial — along with his consistency. In 2019, he threw for 2,360 yards with 19 touchdowns and five interceptions at Syracuse. Last year, however, he completed 32 of 52 passes for 388 yards, one touchdown and two interceptions before entering the transfer portal.

“Biggest thing is staying healthy, taking care of your body,” DeVito said of returning to top form. “Then, mentally from then to now, how much I’ve grown.”

DeVito and Sitkowski have known each other for the better part of a decade after training together as high school prospects in New Jersey.

“It’s funny how people’s paths cross and you never know when you’re going to be back with someone, so you never burn any bridges,” DeVito said. "We’ve always had a good relationship and it’s only gotten stronger now.”

Illinois should expect opponents to load the box with eight-man fronts to stuff the run until the offense proves it is capable of moving the ball through the air.

Tackles Alex Palczewski, a sixth-year senior, and 6-6, 315-pounder Julian Pearl give the Illini plenty of pocket protection and versatile lineman Alex Pihlstrom will slide to center this season.

“Being back out there makes you feel alive again,” defensive tackle Keith Randolph said of returning to full practice after a thumb injury limited his work in the spring.

Randolph (5.5 tackles for loss and four sacks in 2021) and Johnny Newton (three sacks and four tackles for loss) headline a crop of returning defensive standouts, along with safety Sydney Brown and nickelback Jartavius Martin.

Illinois opens Big Ten play at Indiana on Sept. 2, which Bielema called a “tremendous challenge.” He noted the Illini were playing a week earlier before taking on the Hoosiers for the first time since 2017.

“They’ve had all spring, all summer, all fall camp to work on the Fighting Illini,” Bielema said.

Also on the schedule is Bielema's Oct. 1 return to Wisconsin, where he won three straight Big Ten titles from 2012 to 2014. Big Ten West foes Iowa, Minnesota and Purdue all visit Champaign before the Illini close out the season at Michigan and Northwestern in November.