New Mexico coach Bob Davie said he will be back eventually 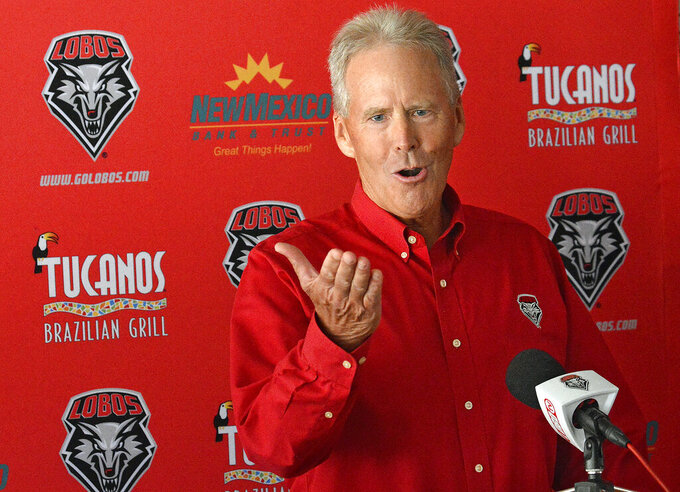 In this Aug. 31, 2019 photo, University of New Mexico Head Football coach Bob Davie speaks to the media in Albuquerque, N.M. New Mexico coach Bob Davie, recuperating from an unspecified “serious medical situation” immediately following a Lobos win against Sam Houston State on Aug. 31, vowed he would return to the sidelines at some point. (Jim Thompson/The Albuquerque Journal via AP)

ALBUQUERQUE, N.M. (AP) — New Mexico coach Bob Davie, who will miss the Lobos' trip to South Bend to face No. 7 Notre Dame because of an undisclosed health issue, said Tuesday he will eventually be back on the sidelines for the team, though it's not clear when.

Davie has turned the reins of the team over to offensive line coach Saga Tuitele and he said he will leave the game planning for Saturday's matchup in the hands of his coaching staff. He said he'll be back when he's ready.

Davie was taken to the hospital after having what he described as a "serious medical situation" that came on unexpectedly during New Mexico's season-opening win over Sam Houston State on Aug. 31.

Davie said he expects to make a full recovery.