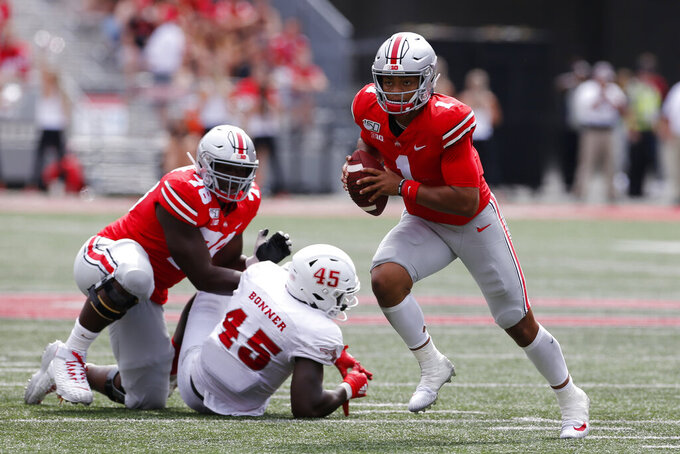 COLUMBUS, Ohio (AP) — Justin Fields accounted for five touchdowns in his debut as Ohio State's starting quarterback, but his coach's favorite play was when the sophomore scrambled out of the pocket and threw the ball out of bounds to avoid a sack in the second quarter.

That showed that the Georgia transfer's judgment and game management skills are getting closer to what coach Ryan Day wants to see. Making good decisions on the fly is one of the things Day has harped on throughout the preseason. Seeing it in action was satisfying for the first-year Ohio State coach.

"That's not the first I heard that from him," said Fields, who threw four touchdown passes and ran for another score as the No. 5 Buckeyes (1-0) took down out-manned Florida Atlantic last Saturday.

"He always tells me that in practice because he really emphasizes just playing smart and taking care of the ball," Fields said. "So I'll have a crazy touchdown in practice, and then he'll tell me after practice is done, 'My favorite play was when you threw the ball away.' So that's not the first I heard that from him. He likes it when I just play smart and make smart decisions."

After watching a replay of the game, Day had generally high marks for Fields, even though the offense couldn't keep the pressure on FAU after four quick touchdowns in the first quarter.

"He played well in terms of game management," Day said. "He didn't try to do stuff that wasn't there. Those drives that we ended up scoring later on, it was because he kind of kept us on schedule."

It's all about getting game experience, which just can't be replicated in practice, Day said. Fields completed 27 passes on just 39 attempts in limited action last season as the freshman backup to Jake Fromm at Georgia.

Fields said he knows he has work to do. One of the things is getting into the habit of sliding after he runs the ball to avoid taking a big hit. It's something he's never done at any level of football.

"Just doing all the little things right," he said.

He's got to get used to taking the hits when they come, too. Defenders are not allowed to hit and tackle their own team's quarterbacks in practice, so Fields got his uniform dirty for the first time against FAU.

"I think it's very hard," he said. "On Sunday I was definitely feeling it. I think as the season goes on, my body will adjust to it. I'll be good."

Fields and the Buckeyes are getting set to face a considerably tougher defense this week when Cincinnati visits the Horseshoe. The Bearcats finished 11th nationally in total defense last year and limited UCLA to 218 yards in an opening week 24-14 win. Three of their top four tacklers from last year are in the current lineup.

The game features the return of Luke Fickell, the UC coach who spent five seasons at Ohio State as a player and another 16 as a coach.