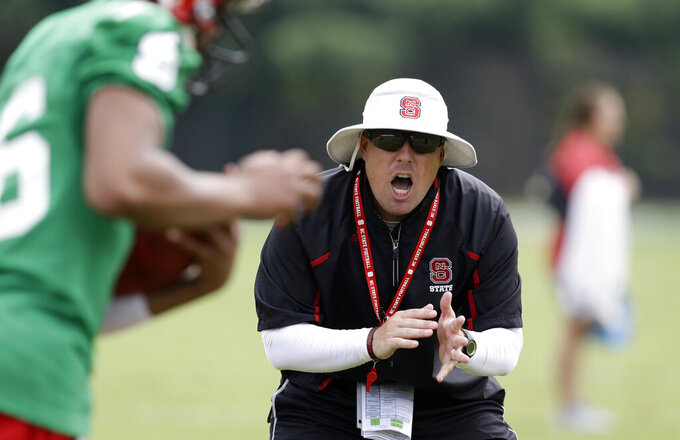 FILE - In this Aug. 1, 2016, file photo, then-North Carolina State offensive coordinator Eli Drinkwitz works with quarterbacks during an NCAA college football practice in Raleigh, N.C. If Appalachian State is to prolong a three-year reign atop the Sun Belt Conference, it'll have to do so with a new coach. It's the debut season for Eli Drinkwitz after his successor, Scott Satterfield, left for Louisville. By (AP Photo/Gerry Broome, File)

NEW ORLEANS (AP) — If Appalachian State is to prolong a three-year reign atop the Sun Belt Conference, it'll have to do so under a new regime.

This season marks the head coaching debut for Eli Drinkwitz after his successor, Scott Satterfield, left for Louisville.

"There's a lot of things that they've accomplished in the past that are tremendous," said Drinkwitz, who spent the past three seasons as offensive coordinator at North Carolina State.

After tying for the league title in 2016 and 2017, Appalachian State won the Sun Belt's inaugural championship game last season over West Division champion Louisiana-Lafayette and followed that up with a lopsided victory over Middle Tennessee in the New Orleans Bowl.

The good news for Drinkwitz is that many prominent players from the 2018 Mountaineers are back, including quarterback Zac Thomas, the reigning Sun Belt offensive player of the year and New Orleans Bowl MVP.

"We do have a lot of returning starters. We do have a lot of players with experience. But they're not experienced in our schemes, in our system, with our coaching staff," Drinkwitz said. "We're kind of behind the 8-ball, especially when you look around the conference at the teams that have relatively had a lot of success in the past, that return their coaching staff intact with a lot of tremendous players."

"We're trying to figure out how to go from a good season to a great season," said Georgia Southern coach Chad Lunsford, who oversaw an eight-win improvement over 2017. "It's important for our guys to understand that we're not going to sneak up on anybody."

Thomas sounds as if he's looking forward to trying new things under Drinkwitz and even derives motivation from the uncertainty that comes with regime change.

"I like to think that we're still the underdog," Thomas said. "Last year doesn't mean anything. We still have to go out there and prove ourselves."

Here are some of the central themes in the Sun Belt Conference in 2019.

Drinkwitz is one of four new head coaches in the Sun Belt.

Chip Lindsey has taken over at Troy for Neal Brown, who was plucked away by West Virginia.

Jamey Chadwell slides in almost seamlessly at Coastal Carolina, where he was offensive coordinator and became interim head coach when Joe Moglia stepped away for health reasons. When Moglia informed Coastal Carolina that he'd decided not to return to coaching in the foreseeable future, Chadwell, a former Charleston Southern head coach, had the interim tag removed from his title at Coastal.

At Texas State, Jake Spavital replaces Everett Withers, who was fired near the end of his third season. Spavital spent the previous two seasons as West Virginia's offensive coordinator and quarterbacks coach.

Both Drinkwitz and Spavital began their college coaching careers as graduate assistants on the same staff as Auburn coach Gus Malzahn — Drinkwitz at Auburn in 2010-11, Spavital at Tulsa in 2008.

Sun Belt teams have posted eight victories over Power 5 conference opponents in the previous eight seasons. The past two have come thanks to Troy's upsets at LSU in 2017 and at Nebraska last season. This season, there will be more opportunities, including:

Louisiana-Lafayette vs. Mississippi State in New Orleans on Aug. 31.

Georgia Southern at LSU on Aug. 31 and at Minnesota on Sept. 14.

Georgia State at Tennessee on Aug. 31.

South Alabama at Nebraska on Aug. 31.

Coastal Carolina at Kansas on Sept. 7.

Arkansas State at Georgia on Sept. 14.

Troy at Missouri on Oct. 5.