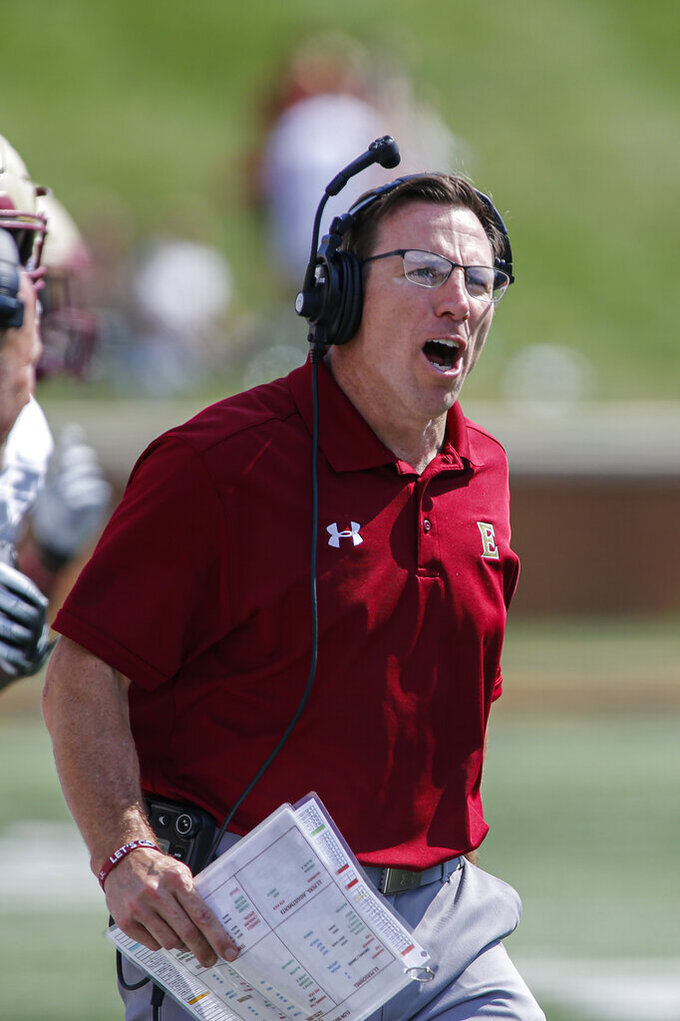 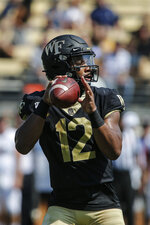 WINSTON-SALEM, N.C. (AP) — After a pair of dramatic wins in his first three outings, Wake Forest coach Dave Clawson thought his team's approach to a game against an FCS opponent would be a test of its maturity. Consider the test passed.

Jamie Newman completed 27 of 35 passes for 351 yards and five touchdowns, and Wake Forest eased past Elon 49-7 on Saturday at BB&T Field.

The Demon Deacons (4-0) scored touchdowns on three of their first four drives. They ended any doubt as to the outcome just before halftime when Newman connected with receiver Sage Surratt for a 48-yard touchdown pass, Surratt's second scoring reception of the game, to give the hosts a 28-7 lead.

"These are the games that you love them when they're on the schedule, but you don't necessarily like them when you play them," Clawson said. "I get more nervous, probably more anxiety, over these games than when you play an ACC game or a North Carolina, just because you're always trying to get in the minds of your players, and you don't know where they're at mentally.

"I don't think we started as fast as we did the first three games. But once we got tested a little bit, I thought we responded well."

Newman tied a school record with his fifth touchdown pass, a 31-yard completion to Scotty Washington, to cap Wake Forest's opening drive of the third quarter. His work done, Newman watched the remainder of the game from the bench.

"We came out and handled business like we were supposed to," Newman said.

The win secured only the seventh 4-0 start to a season in Wake Forest's program history. However, the feat has become more commonplace in recent history, having occurred in three of the last four seasons.

For Elon (2-2), quarterback Davis Cheek completed 9 of 18 passes for 74 yards and a touchdown. De'Sean McNair added 49 rushing yards on nine carries. The Phoenix finished with only 183 yards of offense.

"I know what kind of football team we have, and this was not our best football today, but (Wake Forest) is a real good football team," Elon coach Tony Trisciani said. "They're one of the best passing offenses in the ACC, the best right now."

"Credit to our defense," Clawson said. "We bottled them up. We covered them pretty good. Take away that one (scoring) drive, and I think we played as good as you can."

Wake Forest: The recent run of success continued for the hosts. Dating back to the 2018 season, the Demon Deacons have won six consecutive games. It is the program's first six-game winning streak since a span covering the end of the 2007 season and the beginning of the 2008 season.

Elon: The Phoenix are still looking for their first win over an FBS opponent. Elon fell to 0-12 in such games; three of those 12 losses have come at the hands of Wake Forest.

Even Clawson was taken aback by how quickly the afternoon's work went by. The total elapsed time from kickoff until the final whistle was a brisk two hours and 48 minutes.

"I think that's the shortest game we've played in the last three years," the sixth-year coach said. "I always think, hey, four hours. We were done in three. You guys get more of your Saturday now, right? You're welcome. Second half, I said, 'Hey, I'm thinking of the media. I want them home for dinner.'"

Wake Forest finished with 607 yards of offense, good enough for fifth-best in a single game in program history. It was the sixth consecutive game in which the Demon Deacons gained at least 400 yards, a new program record.

Surratt and Washington became the first pair of receivers to each post at least 100 receiving yards in the same game since Wake Forest's 2018 season-opener against Tulane.

"It's fun just throwing to those guys. It's fun seeing all the work they put in get put on display on Saturdays. Those guys are extremely hard-working, countless hours," Newman said. "They make it easy. Not only being big bodies, but the way they use their bodies. They have excellent body control in the air. The hand-eye coordination is unbelievable."

Wake Forest: The Demon Deacons open their ACC schedule (notwithstanding their nonconference win over North Carolina) at Boston College on Saturday.

Elon: The Phoenix face another tough test as they return to FCS competition, hosting James Madison on Saturday. The Dukes entered the week ranked No. 2 in the FCS coaches poll.