Next man up: QB Jones leads No. 1 Alabama against Arkansas 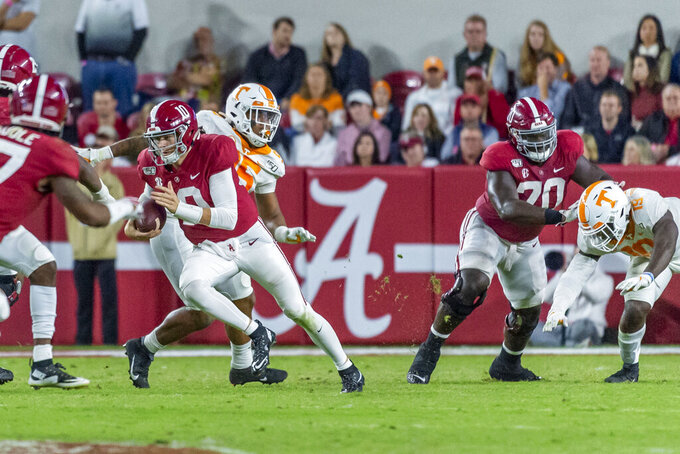 Alabama quarterback Mac Jones (10) carries the ball against Tennessee during the second half of an NCAA college football game Saturday, Oct. 19, 2019, in Tuscaloosa, Ala. (AP Photo/Vasha Hunt)

TUSCALOOSA, Ala. (AP) — Alabama's mantra of "Next man up" for overcoming injuries will be put to the test this week against Arkansas.

With injured quarterback Tua Tagovailoa out, sophomore Mac Jones is in.

The top-ranked Crimson Tide will turn to Jones on Saturday night against Arkansas as Tagovailoa is sidelined with a right ankle injury. Jones must go from unknown understudy to one of college football's stars to leading man — at least for one game.

"Mac's got to be the leader of the team," Alabama coach Nick Saban said. "He's got to take over the team. When you're the backup player, you're a little bit like the sparring partner, but you can't be that anymore.

"You're the lead fighter. You're the top dog. You've got to do things with confidence. You've got to take command. You can't have bad body language in front of your teammates, regardless of what happens."

Alabama (7-0, 4-0 Southeastern Conference) remains a 32-point favorite over the Razorbacks (2-5, 0-4), who are coming off a 51-10 loss to No. 9 Auburn. One of the main questions outside the team has already been whether Tagovailoa will return for a Nov. 9 showdown with No. 2 LSU after an open date.

But first things first for Alabama.

Jones gets center stage for a change after replacing Tagovailoa in the second quarter against Tennessee.

"I've got as much faith in Mac as I've got in any quarterback here," Alabama tight end Miller Forristall said.

"There's not many deficiencies on that football team," said Morris, who is still seeking his first SEC win. "Mac Jones came in the other night, and they'll do a great job of preparing a plan for him to do what he can execute and execute at a high level.

He's got a great supporting cast around him."

Some other things to know heading into the Arkansas-Alabama matchup Saturday:

Morris hadn't announced a starting quarterback for the game at mid-week. Ben Hicks started against Auburn but has a sore left shoulder. Hicks has split time with Nick Starkel.

Placekicker/punter Will Reichard aggravated a hip injury while handling just punting duties in the Tennessee game and isn't expected to play. Alabama had struggled with punting this season, but walk-on Ty Perine made an impression with both his punts and a tackle on a return.

Perine got a big reaction after punting for 42 and 51 yards and making the tackle on the second one.

"You got the reaction from the crowd as soon as the ball was in the air, so I knew it was a good kick," Tide receiver Henry Ruggs III said. "But I definitely didn't think it was going that far."

Alabama will honor the 2009 national championship team before the game. It remains the only unbeaten season for Saban as a head coach. Four of that team's stars will be serving as honorary captains: Javier Arenas, Mark Ingram, Mike Johnson and Rolando McClain.

Alabama is tied with UMass for the national lead with eight freshmen having started games, including six on defense. Five freshmen have started for the Razorbacks.

Saban bristled at a question over whether he wanted to get freshman quarterback Tualia Tagovailoa, Tua's little brother, into the game.