NFL Prospect Watch: Is Jobe the Tide's next NFL-ready DB? 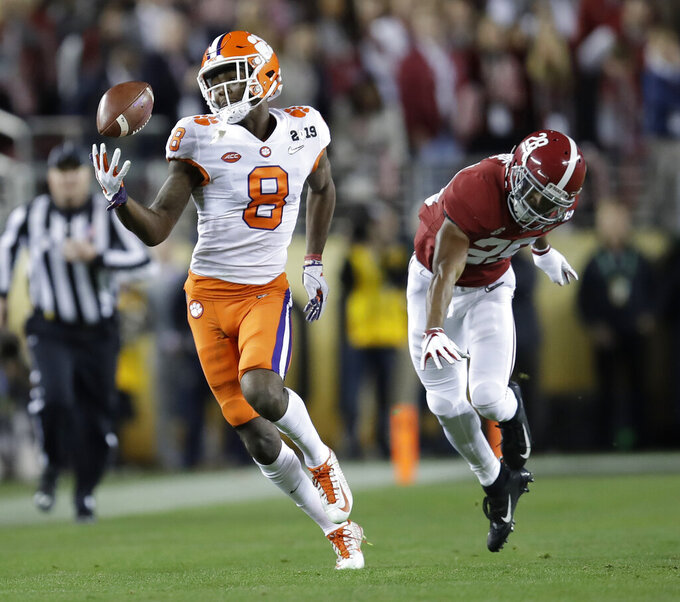 Three-and-out is the route to the NFL for a lot of Alabama players. The Crimson Tide’s best often don’t need to play their senior seasons to be early-round draft picks.

Crimson Tide cornerback Josh Jobe has a chance to take a similar path to the draft this year. He is the first top prospect The Associated Press will spotlight each week with help from Reese’s Senior Bowl executive director and former NFL scout Jim Nagy.

Jobe, a senior from Miami, enters the season as the Tide’s No. 1 corner but with work to do to become the seventh Alabama cornerback taken in the first round during Nick Saban’s 15 seasons as coach.

Jobe was a four-star recruit who signed with Alabama after playing his final high school season at Cheshire Academy in Connecticut. He steadily climbed the depth chart at Alabama, becoming a full-time starter last season opposite one of the best cornerbacks in the nation.

Patrick Surtain II was one of those three-and-out Alabama stars who went from freshman starter to top-10 pick after his junior season.

Playing with Surtain increased the pressure on Jobe as teams were more likely to target him. He showed the confidence necessary to shake off the bad plays.

This season, he is one of the leaders of Alabama's defense.

“Always comes to practice with a fire, always pushes me as a passer, our receiver, whoever he’s guarding,” Tide quarterback Bryce Young said about Jobe. “So really just that intensity, that attention to detail that you can tell that he has. It translates and it’s something that really gets us better and prepares us as we go into the season.”

SIZE & STATS: Jobe has excellent size for a corner at 6-foot-1 and 195 pounds. It's a sturdy looking 195 that suggests he could add a few more pounds as he matures. Last season he had 11 passes defended, two forced fumbles and 2 1/2 sacks. Facing a steady dose of NFL-caliber receivers in the Southeastern Conference, Jobe held his own with a 77.1 grade in coverage by Pro Football Focus that was good for 42nd among FBS cornerbacks.

BIGGEST MOMENT: Jobe's breakout game came at the end of the 2019 season. Starting against Michigan in the Citrus Bowl, Jobe had six tackles, a pass breakup and his first career interception.

SCOUT’S TAKE: “Right off the bat, you got to start with he's got that Alabama DB DNA. He plays really confident, really aggressive and disciplined and dialed in," said Nagy, who is reminded of Minkah Fitzpatrick when he looks at Jobe. “He's played mostly outside there. I could see Josh, because of his aggressive nature, his willingness, his physicality, eventually transitioning to safety.”

The missing piece in Jobe's game is big plays. Interceptions can be deceiving for a cornerback because opponents often shy away from throwing at the very best ones. But first-rounders tend to flash some play-making ability. Jobe could use a few of those in his senior season.

DRAFT WATCH: Nagy said Jobe enters the season with a solid Day 2 draft projection, slotting him into the second or third round.

“That's a play-making position,” Nagy said. “He's going to have a lot of opportunities in big games for Alabama to make plays against good opponents. To me I would never put a limit right now where Josh could go.”

Follow Ralph D. Russo at https://twitter.com/ralphDrussoAP and listen at http://www.APpodcasts.com/