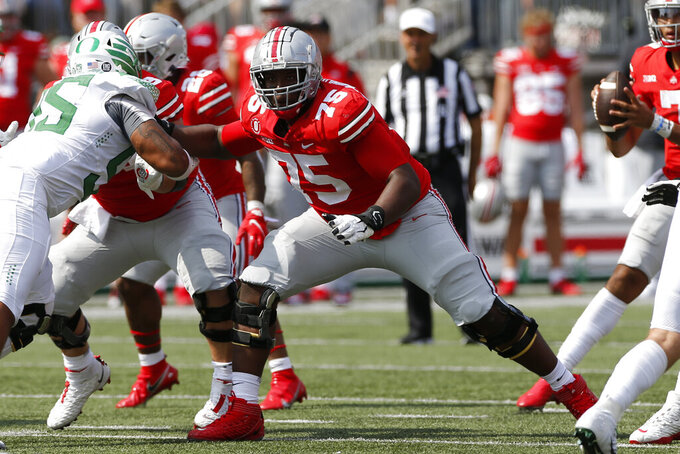 FILE - In this Sept. 11, 2021, file photo, Ohio State offensive lineman Thayer Munford (75) plays against Oregon during an NCAA college football game in Columbus, Ohio. Munford wanted to give himself his best chance to make it to the NFL. So a star who already had been invited to the Senior Bowl decided to return and become a “Super Senior.” (AP Photo/Jay LaPrete, File)

Ohio State offensive lineman Thayer Munford wanted to give himself his best chance to make it to the NFL.

So a star who already had been invited to the Senior Bowl decided to return to school and become a “super senior.”

He's made the most of it. The 22-year-old was a first-team All-Big Ten selection at tackle last season before switching to guard, and now, he's among 12 semifinalists for the Lombardi Award, given to the nation’s top lineman or linebacker. He’s anchored an offense that leads the nation in total offense (563.2 yards per game) and scoring offense (48.5) heading into the fifth-ranked Buckeyes’ game at Indiana on Saturday.

“The fact that he’s come back now and played guard and really looked better at guard than he did at tackle -- he’s had a really nice year," Reese's Senior Bowl director Jim Nagy said.

Nagy said Munford’s versatility will serve him well in the NFL because teams don’t carry many extra linemen. Often, teams are forced to project if a player can play multiple positions. Munford already has done it well.

Nagy said some players struggle particularly with moving to guard because there are more things to pick up, but not Munford.

“It happens faster," Nagy said. "You got linebackers coming downhill at you. He’s really done a nice job. The game hasn’t been too fast for him, which speaks to his instincts.”

Munford suffered a leg injury against Tulsa and missed the next game against Akron. He has since recovered and played the best football of his already accomplished career.

Munford is Ohio State’s Block “0” recipient for this season. It is inspired by Bill Willis, who helped the Buckeyes win The Associated Press national title in 1942 and later became one of the first Black pro football players. The school said the recipient must have the qualities Willis stood for – toughness, accountability and the highest of character.

Munford is 6-foot-6 and weighs 320 pounds. He is considered “long” for a tackle and even longer for a guard. He moves relatively well for his size.

He recovered from his leg injury and helped the Buckeyes pass for 330 yards and run for 208 in a 52-13 win over Rutgers. The Buckeyes led 45-0 at halftime.

Nagy said Munford's choice to be patient will pay off.

“You’re getting a more physically mature person,” he said. "Between the ages of 22 and 26, you put on that natural maturation weight. So he’s going to he’s going to have a little more of that, you know? And I just think from a maturity standpoint, I think all these guys staying an extra year like that will benefit.”

Early mock drafts have Munford going somewhere between the late first round and the fifth round. Boston College's Zion Johnson, Memphis' Dylan Parham and LSU's Ed Ingram are among those he'll be competing with at his position as he looks to move up the draft board.