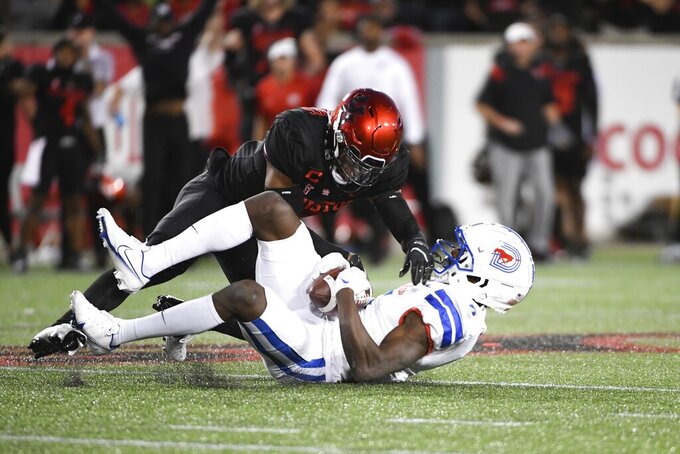 Why would they kick to him?

That was the obvious question after Houston's Marcus Jones returned a kickoff 100 yards for a touchdown with 17 seconds left in an Oct. 30 game against SMU, giving the Cougars a 44-37 victory and ending the Mustangs' bid for an unbeaten season. SMU coach Sonny Dykes indicated there was too much time on the clock to risk giving Houston good field position with a squib kick, and the result was one of the most dramatic plays of the college football season.

Afterward, Houston coach Dana Holgorsen suggested Jones might be the best returner ever.

Jones began his college career at Troy. He returned two kickoffs for touchdowns in a 2017 game against Coastal Carolina, then three weeks later, he scored on a kick return and an interception return in a victory over Arkansas State.

He added another kick return touchdown as a sophomore before transferring to Houston. He ran a punt back 72 yards for a TD against South Florida in 2020, and this season he's scored twice on punt returns, twice on kickoff returns, and even once as a receiver.

Listed at 5-foot-8, 185 pounds, Jones provides value behind his periodic TDs. He's second in the nation in yards on punt returns with 287 on 19 returns. His yards on returns and his occasional contributions on offense are enough for him to rank second on the team with 85.1 total yards a game — not bad for a defensive back.

That game-winning return against SMU capped an incredible day for Jones. He also had an interception and a tackle for loss in that game, as well as two punt returns for 32 yards.

“He has the speed and off-man cover skills to play outside, he has good reactions and closing burst inside at nickel, he has legit NFL return skills, and he could even get you out of a game at slot receiver in a pinch,” Nagy said.

There's a limit to how much value a player can offer on special teams — even Devin Hester wasn't picked in the first round. The ability to contribute in other ways could make Jones an enticing selection.

“The more I watch this guy, the more I like him," Nagy said. "Maybe even more importantly, the Houston coaching staff raves about his football character. If I still worked in the NFL I’d be pushing hard for my team to draft him.”