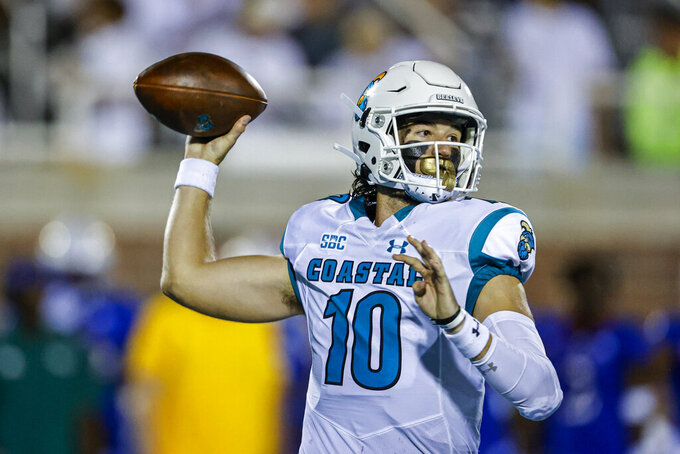 FILE - Coastal Carolina quarterback Grayson McCall looks to pass against Kansas during the first half of an NCAA college football game in Conway, S.C., Friday, Sept. 10, 2021. McCall had surgery last month, his right arm is in a sling and he can't turn his shoulder loose to throw until right before the start of preseason camp this summer. Still, he'll be a willing, active spectator as the Chanticleers go through spring workouts. (AP Photo/Nell Redmond, File)

COLUMBIA, S.C. (AP) — Coastal Carolina’s Grayson McCall is considered a mid-round NFL draft prospect but the quarterback who passed on transferring to a Power Five school won't throw a football for months as he rehabs an upper body injury.

McCall had surgery last month and with his right arm is in a sling and he can't turn his shoulder to throw until right before the start of preseason camp this summer. But he'll be an active spectator when the Chanticleers go through spring workouts.

The 6-foot-3, 210-pound McCall has a strong foundation he can build on.

He was No. 1 in the nation in passing efficiency with a rating of 207.6, well in front of second-place C.J. Stroud at Ohio State. McCall was second in the FBS in yards per completion at better than 16 yards a catch, led the Chanticleers to an 11-2 finish and their first-ever bowl win.

McCall has been the face of Coastal's rise in the football ranks the past two seasons — the Chanticleers have spent time in the AP Top 25 each of the last two years. He acknowledged the success made him consider a transfer to a Power Five program seeking an on-target, experienced quarterback. The move could have put him on a bigger stage for NFL scouts.

McCall ended questions about whether he was staying put in December with a social media post. He even got a bit raunchy in the post, saying that he urinated teal, one of Coastal's primary colors including the turf on its field.

“It was a long, thought-out process, but I just couldn’t leave this place," McCall said before Coastal’s first practice in 2022. “I love it here,” .

McCall said moving, no matter how big an upside, comes with risks.

“Whenever you’re going to a new place, you’re not just starting over in football. You’re starting a whole new life,” he said.

Life for McCall has been just fine with the Chanticleers.

The little thought of prospect out of high school has an NIL deal with Tom Brady’s recently launched clothing line and the chance to finish building the foundation of Coastal’s place in the FBS. Coastal coach Jamey Chadwell saw uncommon accuracy and the skillset to lead a complex attack.

McCall has completed 71% of his passes with 53 touchdowns against six interceptions the past two years. He helped Coastal become the surprise of the pandemic-influenced season, going 11-1 in 2020.

The Chanticleers started last season 6-0 before Sun Belt Conference losses to Appalachian State and Georgia State knocked them out of the league championship game.

McCall missed two games due to injury, returning in mid-November to lead the Chants to three wins to end the season. That included a 47-41 victory over Northern Illinois in the Cure Bowl in which McCall threw for 315 yards and four touchdowns.

McCall was disappointed he needed surgery, Chadwell said. But the coach doesn't believe McCall's competitive drive will stop during spring workouts. He expects McCall to help younger receivers and offensive linemen, tutoring them on what the team needs to take another step forward this season.

“He will be like having extra help out there because he obviously played every day,” Chadwell said.

Any familiarity with teammates the quarterback can gain over the next several weeks will be essential. The Chants have lost their top two pass-catchers in receiver Jaivon Heiligh and tight end Isaiah Likely, who combined for 220 catches and 34 touchdowns the past two seasons.

McCall said he is ready for the next challenge.

“It's going to be super exciting, seeing all those guys and new faces competing for jobs because there's open spots all over the field,” he said.

McCall is considered a mid-round NFL selection in the 2023 draft who could improve his position with another big year.

“This place kind of made me who I am," McCall said, “so I owe this place the world."