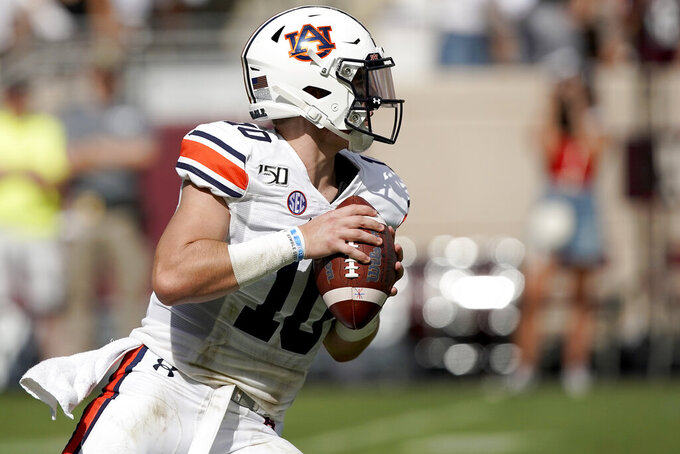 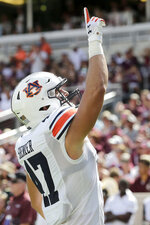 COLLEGE STATION, Texas (AP) — Auburn coach Gus Malzahn was pleased with the performance of Bo Nix in a victory at Texas A&M on Saturday.

What made Malzahn even happier is that the freshman quarterback will likely be with him for a long time to come.

Nix threw a touchdown pass and JaTarvious Whitlow ran for a score as No. 8 Auburn built a big lead and withstood a late charge from Texas A&M to get a 28-20 win over the 17th-ranked Aggies.

"It's going to be a lot of fun to have him around in the future," Malzahn said. "I'll tell you that."

Nix didn't put up flashy numbers against the Aggies, but he looked poised and didn't make any big mistakes in his first true road game in front of a rowdy crowd of 101,681.

"He's got something special to him," Malzahn said. "He's not your normal freshman. We knew that when we recruited him. One thing that I like is the moment ain't too big for him."

Nix said knowing how strong Auburn's defense was and the preparation and advice he got during the week from the coaching staff helped him on Saturday.

"It was kind of easy to stay poised," he said.

Fellow freshman Joey Gatewood replaced Nix for a few snaps throughout the game and he threw his first career touchdown pass in the first quarter.

The Tigers (4-0, 1-0 SEC) were up 21-3 before A&M (2-2, 0-1) finally got going offensively in the fourth quarter. Mond cut the lead to 21-10 with his first touchdown pass early in the quarter before Auburn added a touchdown rushing. But the Aggies made a field goal before Mond connected with Ainias Smith on a 15-yard TD pass with just over two minutes left to get them to 28-20.

However, Auburn recovered the onside kick and ran out the clock.

"We don't have a bad football team, we've just got to get them to play better and that's my job," Texas A&M coach Jimbo Fisher said.

Auburn took an early lead when Nix handed the ball off to Whitlow who got it to Anthony Schwartz on a reverse that he took 57 yards for a touchdown to make it 7-0.

Seth Small missed a 47-yard field goal on Texas A&M's first possession and one from 52 to end the second quarter.

Gatewood's TD pass came late in the first quarter when he found John Samuel Shenker wide open in the end zone for the 6-yard catch that made it 14-0.

Mond connected with Jhamon Ausbon on a 41-yard pass on the last play of the first quarter. But A&M's offense stalled after that and the Aggies settled for a 33-yard field goal that cut the lead to 14-3.

Freshman Isaiah Spiller had a 13-yard run to start the third quarter, but Daniel Thomas knocked the ball out of his hands at the end of the run and pounced on it to give Auburn the ball.

The Tigers took advantage of the turnover when Nix found Seth Williams on a 9-yard touchdown pass that pushed the lead to 21-3.

Texas A&M's next drive was a mess with Mond being sacked and fumbling on first down. The Aggies recovered it, but Mond was sacked again on the next play. The Aggies were then penalized for delay of game and then for a false start to bring up third-and-30. Jacob Kibodi ran for 22 yards after that before Texas A&M had to punt it away.

Texas A&M's defense forced a punt on Auburn's next drive, but the Aggies managed just one yard on their ensuing possession and had to punt it right back.

The Aggies finally put together a nice drive early in the fourth quarter capped by a 27-yard touchdown reception by Quartney Davis that cut the lead to 21-10.

Auburn then ate up six minutes off the clock with a 12-play drive after that and added a touchdown on an 8-yard run by Whitlow that made it 28-10.

"That was the type of drive that wins the game on the road," Malzahn said. "That was the best drive we had all season."

Auburn: Nix was solid and should only get better with more experience. Auburn's defense kept the Aggies off-balance for most of the day in a solid all-around game for the Tigers, who have a home game next week before they travel to No. 9 Florida on Oct. 5.

Texas A&M: The Aggies came out flat and missed a chance for a big win in a season that only gets more difficult. Texas A&M still has to play No. 2 Alabama, No. 3 Georgia and fourth-ranked LSU. The latter two are on the road in consecutive weeks to end the season.

"Our team's growing up," Malzahn said. "We're still not there ... but they're getting more confidence."

Texas A&M's Braden Mann, who won the Ray Guy Award for the nation's best punter last season, is having another great year. On Saturday he had five punts of 50 yards or more, including two for 60 yards or more. Mann averaged 56 yards a punt on Saturday for his eighth career game with an average above 50 yards.

Auburn should maintain its spot or could move up if any teams ahead of the Tigers fall on Saturday. The Aggies will certainly plummet in the poll and could fall out altogether after the home loss.