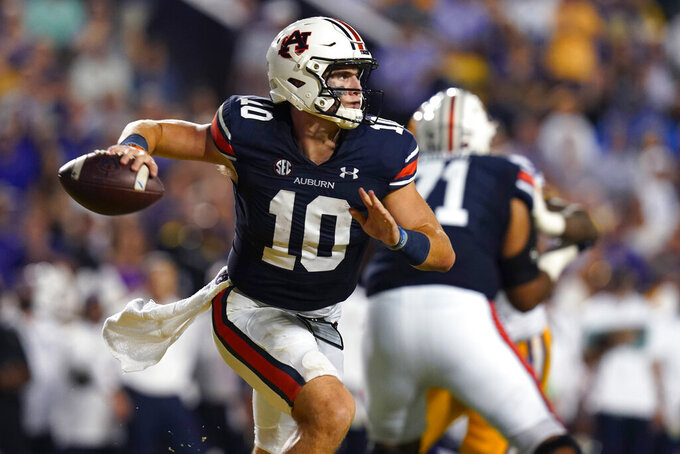 BATON ROUGE, La. (AP) — Bo Nix ducked, dodged and danced away from pressure until he wore LSU out and left the field celebrating Auburn's first triumph in Death Valley in more than two decades.

Nix passed for a touchdown and ran for a score and Jarquez Hunter scored on a 1-yard run with 3:11 to give No. 22 Auburn its first lead in a 24-19 victory over LSU on Saturday night.

It was a determined response by Nix after having doubt cast on his status as full-time starter just a weekend earlier, when he was pulled in favor of LSU transfer quarterback TJ Finley for the second half of Auburn's comeback win over Georgia State.

“Tonight was a blast. I came in this week with a different mindset and just to be a competitor,” Nix said. “I just went back to what got me here. I didn’t know how it was going to go, but I wanted to come in here focused and compete like crazy and do whatever it took.”

Auburn (4-1, 1-0 Southeastern Conference), which had not won at LSU's Tiger Stadium since 1999, secured the victory when Bydarrius Knighten intercepted Max Johnson's fourth-down pass at the Auburn 39 with 1:09 left.

Nix frustrated LSU (3-2, 1-1) with his feet, whether he was scrambling or running by design. His 5-yard touchdown run early in the fourth quarter capped a series in which he ran on three of the final four plays for 23 yards.

The touchdown pulled Auburn to 19-17 early in the fourth quarter, and that score stood until Nix led a 92-yard, 11-play, winning drive highlighted by Hunter's 44-yard run on a pitch to the left side.

The most unlikely one — arguably one of the highlights in all of college football on the day — saw Nix roll right, spin away from a diving tackle attempt by safety Major Burns, reverse direction and use a pump fake to dance around defensive end B.J. Ojulari, shake his shoulders to slip another diving tackle attempt by Micah Baskerville, and finally rifle a fourth-down, 24-yard touchdown strike to Tyler Fromm a split second before he was pulled down by linebacker Navonteque Strong along left sideline.

“I haven’t run around like this in a while," Nix said. “I’m going to sleep well when I get home.”

The play cut LSU's lead to 13-7 in the second quarter. Shortly before the half ended, Nix threw for first down during another fourth-down scramble, setting up a field goal that made it 13-10.

“We came in with a running plan, but that really didn’t go as planned,” Johnson said. “We have to score touchdowns instead of field goals.”

Auburn's decision to try a surprise onside kick to start the second half backfired and led to an LSU field goal. Later, Cade York's fourth field goal of the night — from 51 yards — made it 19-10.

LSU had jumped out to a 13-0 lead, starting with Johnson's 31-yard touchdown pass down the right sideline to Kayshon Boutte in double coverage.

Boutte’s TD catch was his ninth this season and gave him at least one in each of LSU’s five games.

In addition to getting what could be a turning point for Nix, Auburn also demonstrated perseverance and resilience, overcoming missed and blocked field goals to snap a 10-game skid in Death Valley. Meanwhile, Auburn’s defense produced three sacks and six QB hurries.

LSU's season-long struggles running the ball resulted in a lack of balance that made it difficult to finish drives in the red zone. Three of York's field goals came on drives that stalled at the Auburn 14-, 8- and 5-yard line.

Auburn should climb in the AP Top 25 after several teams ranked ahead of them lost, including No. 15 Texas A&M, No. 12 Mississippi, No. 10 Florida, No. 9 Notre Dame and No. 8 Arkansas.

Auburn hosts unbeaten Georgia in a renewal of “The Deep South's oldest rivalry.”