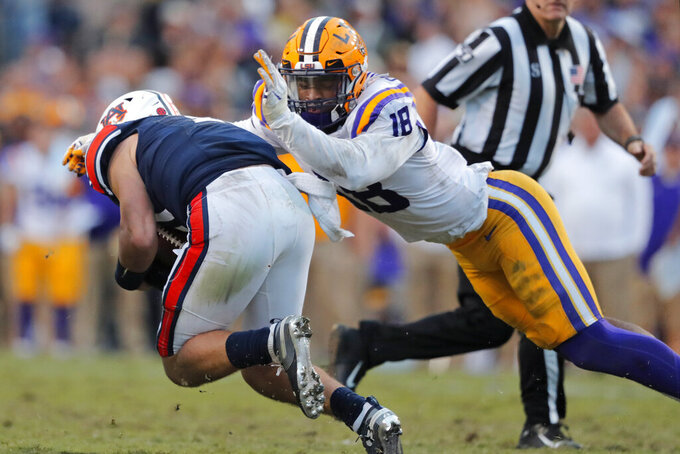 AUBURN, Ala. (AP) — Bo Nix and the Auburn Tigers will finish the season trying to take advantage of the comforts of their home field.

It has certainly been kinder to them than the road, where the 11th-ranked Tigers' offense and their freshman quarterback have struggled at times. That held true again in a 23-20 loss at No. 1 LSU last weekend.

"It's a difference-maker," Auburn coach Gus Malzahn said of finishing at Jordan-Hare Stadium. "We play better at home, there's no doubt."

That's especially true for Nix, though it doesn't help that the Tigers' four toughest games so far have come away from home. After Ole Miss, Auburn hosts No. 8 Georgia and No. 2 Alabama with a game against FCS Samford in between.

Nix's numbers have been pedestrian in five games away from home: six interceptions, a 48.5-percent completion rate and an average of 151 passing yards. That includes three picks against the Gators in a 24-13 loss and a much more efficient effort in a blowout win over Arkansas.

Florida and LSU are tough environments for any quarterback, much less a freshman, but Auburn wide receiver Seth Williams figures the next step for Nix is "being able to play in big games like this."

Nix has delivered in those conditions, if not consistently. He threw the game-winning touchdown pass to Williams against No. 7 Oregon in his college debut and helped give Auburn a chance against LSU with a 5-yard TD pass to Williams in the final minutes.

By contrast, Nix passed for 335 yards and ran for 56 — both season highs — in the last home game against Mississippi State.

"I think he's playing better at home but that's to be expected, a freshman quarterback," Malzahn said. "He's more comfortable and I think that's a good thing we're back for him too."

The up-and-down running game has an added weapon now, with the emergence of freshman D.J. Williams. Williams ran for 130 yards against LSU with leading rusher JaTarvious Whitlow still limited by a knee injury. Malzahn said Whitlow still won't be 100 percent for this game.

But aside from Williams' runs of 70 and 41 yards, Auburn produced only 19 yards on the other 31 carries, including sacks.

Auburn could make a change on its offensive line. Malzahn said backup center Nick Brahms will compete with Kaleb Kim for the start against Ole Miss after taking over for him in the last game.

The main difference, though, could be a young quarterback not having to contend with a hostile crowd.

"I feel like we're going to bounce back really well," Nix said after the LSU game. "I know the season's not over with yet. I feel like everybody's going to count us out and they're going to start throwing us to the curb. But once again, that's what always happens to Auburn, and we know what we're capable of.

"We're going to continue to fight and battle. That's just what kind of players we are."