Nix, No. 11 Auburn hoping to have answers after open week 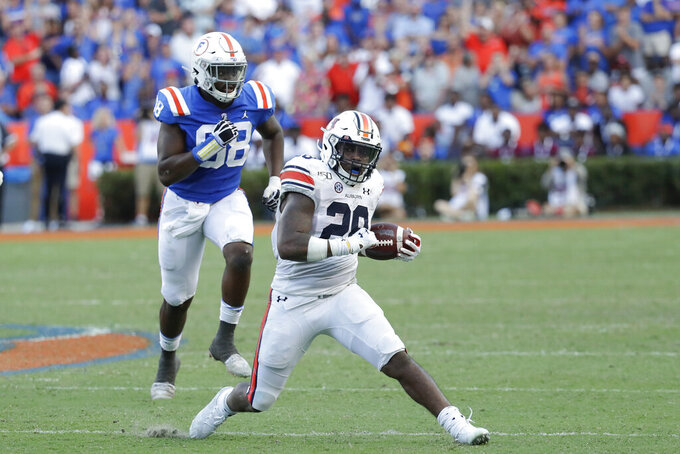 Auburn running back JaTarvious Whitlow (28) gets past Florida defensive lineman Luke Ancrum (98) for yardage during the second half of an NCAA college football game, Saturday, Oct. 5, 2019, in Gainesville, Fla. (AP Photo/John Raoux)

AUBURN, Ala. (AP) — Bo Nix and the Auburn Tigers are trying to get the offense back on track following their first loss and an open date.

The 11th-ranked Tigers struggled offensively in a 24-13 loss to No. 9 Florida , lost their top tailback to injury and had an extra week to try to resolve everything that went wrong. Now, Auburn (5-1, 2-1 Southeastern Conference) tries to get the offense going again Saturday at Arkansas (2-4, 0-3) with a visit to No. 2 LSU looming.

Nix especially struggled against the Gators, throwing for 145 yards with three interceptions and some misfires on potential big plays in a follow-up to his superb performance against Mississippi State. Coach Gus Malzahn, who calls the offensive plays, is hoping the extra week of self-evaluation was good for settling in more on what the freshman quarterback can do best at this point.

"You get on the practice field and the things that he can execute at a high level, that's what you call," Malzahn said Tuesday. "Things that maybe we need a little more time, we don't call it. It's really as simple as that: what he feels comfortable with. And we worked hard on that last week, and we'll continue that this week. Now he feels more comfortable with a lot of things — more than he did the first game

"He's not the same true freshman he was that very first game of the year where we're learning. We know a lot about him, he knows a lot about our offense and we have a plan for him moving forward in the season."

For the next month or more, that plan won't include Auburn's most consistent offensive weapon.

Tailback JaTarvious Whitlow is expected to miss 4-to-6 weeks with a left knee injury sustained against Florida. He has run for 544 yards and seven touchdowns.

It leaves a bigger role for his backups, ranging from veterans Kam Martin and Malik Miller to freshman D.J. Williams, who has only seen action in one game while nursing an injury.

"Our mindset as a group is kind of, 'Next man up' mentality," Miller said. "Boobee (Whitlow) was a leader of the group. He's a vital part of the offense. But we're a very confident group. We have confidence in everybody in the room and we all know what we bring to the table. So we know we've got to step up, but we've been ready. We're ready for the challenge."

There was plenty of room to improve on the performance against Florida, which does have one of the SEC's top defenses. That ranges from the blocking to the play-calling.

Wide receiver Anthony Schwartz, one of college football's fastest players, didn't have a catch. His only offensive touch came on a run when he lost 4 yards.

Nix and Auburn will face an Arkansas defense that ranks 12th in the SEC in points allowed and 13th against the run. He passed for 335 yards against Mississippi State and ran for 56 before the setback in Gainesville.

"I think he's a very talented guy," Arkansas defensive coordinator John Chavis said. "He's obviously a dual threat. He can beat you throwing, he can beat you running. He's a guy that you're going to have to account for in this offense."