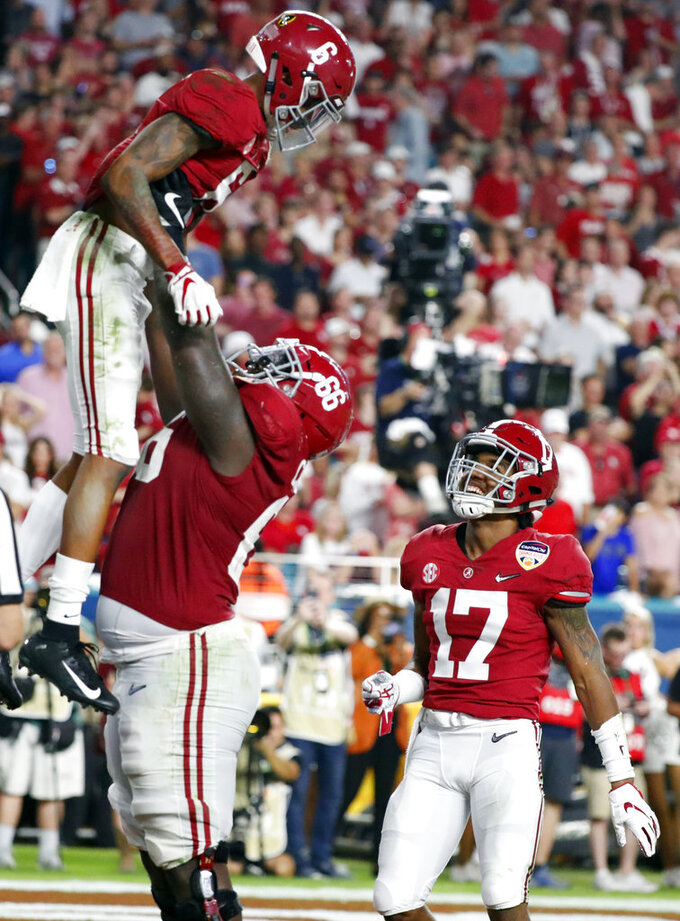 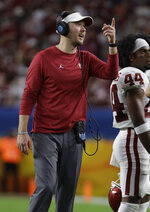 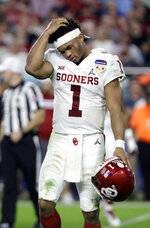 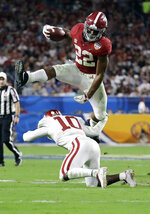 MIAMI GARDENS, Fla. (AP) — This season's Alabama juggernaut has yet to be stopped, and Oklahoma's shaky defense sure wasn't going to get in the way.

Tua Tagovailoa threw for 318 yards and four touchdowns and No. 1-ranked Alabama beat No. 4 Oklahoma 45-34 on Saturday night in the College Football Playoff semifinal at the Orange Bowl .

The high-scoring Sooners reached the semifinal despite a porous defense that was no match for Alabama's diverse attack, and the defending champion Crimson Tide led 28-0 after only 17 minutes.

Alabama (14-0) advanced to the national championship game for the fourth consecutive season and will play Jan. 7 in Santa Clara, California against familiar foe Clemson, which beat Notre Dame 30-3 in the Cotton Bowl. The Tigers, ranked No. 2, and Alabama will face off in the playoffs for the fourth year in a row, and have split two title games.

"They've got a great program and a great team," Alabama coach Nick Saban said. "I'm sure it'll be a great challenge for us, and I'm sure we'll need to play better than we did today."

Saban spiked his headset during one of his several sideline tirades. He lobbed oranges during the postgame celebration.

"It was more fun throwing the oranges," he said.

Tagovailoa's performance argued for a Florida recount in the Heisman Trophy vote. He finished as the runner-up to Oklahoma's Kyler Murray but won sweet consolation by completing 24 of 27 passes, with scores to four receivers.

"It's always good to see your hard work pay off," said Tagovailoa, who played on a sore left ankle. His completion percentage was an Orange Bowl record.

While Tagovailoa connected on his first nine passes for 184 yards, Murray was sacked twice before he threw a pass, and his first completion came with his team already down 21-0.

"The slow start got us beat," Murray said. "It's tough to come back from that."

Murray had one brilliant moment, a perfect deep throw on the move to Charleston Rambo in the end zone for a 49-yard score. He passed for 308 yards and ran for 109 but took several jarring hits, including when All-America nose guard Quinnen Williams dislodged his helmet and forced him from the game for one play in the fourth quarter.

The Sooners (12-2) came up short in a bid for their first national title since the 2000 season.

His team was bowled over, on one play in particular. When Robert Barnes tried to stop Josh Jacobs in the open field, the Alabama running back lowered his head for the collision and continued to the end zone for a 27-yard score while the Sooners safety spun to the turf, dazed and briefly unable to get up.

"When I saw an opportunity to score, I just tried my best to score," Jacobs said with a chuckle.

Alabama had the ball for more than 36 minutes and totaled 528 yards.

"Our offense really controlled the tempo of the game," Saban said. "The only time we really got stopped in the game is when we stopped ourselves."

In a matchup between the two highest-scoring offenses in the country, Oklahoma fell too far behind early.

On the first snap, DeVonta Smith turned Tagovailoa's short pass into a 50-yard gain. The Crimson Tide went on to score an Orange Bowl-record 21 points in the opening quarter.

"It's not the result we wanted or expected," Riley said. "We had a hard time breaking their string of momentum. We dug ourselves too big a hole."

At one point the disparity in yards was 191-0. The most noise the Sooners mustered in the early going was when linebacker Kenneth Murray talked trash with the Alabama bench — with his team trailing by three touchdowns.

The Sooners rallied and closed to within 11 points three times in the final 18 minutes. But two onside kicks failed, and Alabama ran the final 4:23 off the clock after Oklahoma's last score.

Alabama took the opening kickoff and drove 75 yards for a touchdown. Oklahoma was awarded a fumble recovery at the 1, but officials overturned the ruling following a replay review, and Damien Harris scored on the next play.

Tagovailoa threw deep to Jerry Jeudy for 40 yards to set up the Crimson Tide's third score, and Jacobs' catch and run for a touchdown made it 28-0.

Tide linebacker Christian Miller limped to the locker room in the third quarter with a left hamstring injury. An MRI was planned, and his availability for the title game was uncertain, Saban said.

The Crimson Tide need one more win for their sixth national title in the past decade. They have a chance to finish 15-0, which hasn't been done at the top level of college football since Penn went 15-0 in 1897.

Saban moved closer to his seventh national title, which would break the record he shares with the Crimson Tide's Bear Bryant.

Alabama seeks its second consecutive title when it plays Clemson for the fourth postseason in a row. The Crimson Tide won 24-6 in the semifinal a year ago, and 45-40 in the title game for the 2016 season. Clemson beat Alabama for the championship 35-31 two years ago.

The Sooners will begin another bid for their first national title since 2000 when they open the 2019 season at home against Houston on Aug. 31.