No. 1 Alabama looks for 9th straight win over Texas A&M 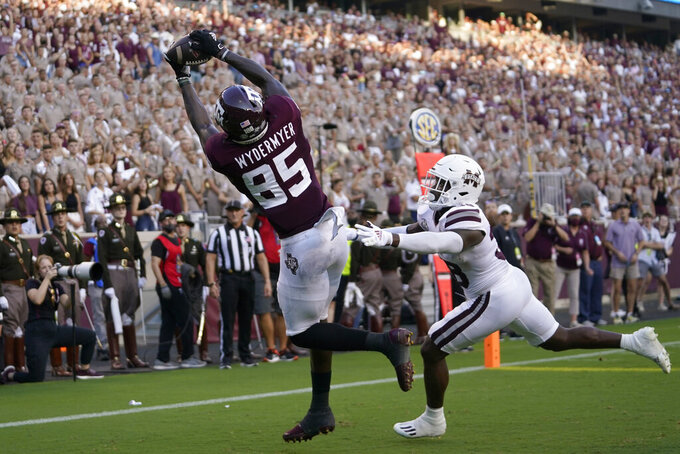 Line: Alabama by 17½, according to FanDuel Sportsbook.

Alabama has the nation’s longest winning streak at 19 games and has won eight in a row over the Aggies. Coach Nick Saban is 24-0 at Alabama against his former assistants and looks to improve to 5-0 against A&M coach Jimbo Fisher. The Aggies will try to bounce back after losing two straight capped by a 26-22 loss to unranked Mississippi State last week to drop out of the top 25 after opening the season ranked sixth.

Alabama QB Bryce Young vs. Texas A&M’s pass defense. The Aggies will try and contain Young on Saturday after allowing season-high 408 yards passing by Will Rogers last week. Young ranks fourth in the SEC with 1,365 yards passing and his 17 TD passes this season are the fourth-most in the country.

Texas A&M: QB Zach Calzada has struggled to move the offense since taking over for Haynes King, who broke his leg Sept. 11. Calzada has averaged just 143 yards passing with two interceptions with one touchdown in two SEC games. Despite the struggles, Fisher believes Calzada is making progress and says the rest of the offense needs to step up to help get the offense on track.

Alabama: RB Roydell Williams should play a bigger role this week after the team’s second-leading rusher Jase McClellan sustained a season-ending knee injury. Brian Robinson Jr. is the team’s starter and leads the Crimson Tide with 379 yards rushing, but Williams could get more work behind him against A&M with McClellan out. Williams has 154 yards rushing with a touchdown this season.

Saban is 50-2 at Alabama in the month of October. ... The Crimson Tide has won 100 straight games against unranked opponents, the longest streak in FBS history. ... Alabama has score at least 30 points in 31 straight games. ... Alabama has forced at least one turnover in 83 of its last 90 games. ... Texas A&M RB Isaiah Spiller ranks fifth in the SEC with 90.6 yards rushing a game. ... DL DeMarvin Leal and Michael Clemons have combined for 10 tackles for losses, six sacks and seven QB hurries in the last three games. ... A&M ranks fifth in the nation by allowing 12.6 points a game. ... DB Antonio Johnson leads the team with 41 tackles after notching a career-high 15 last week. ... RB Devon Achane is averaging 7.7 carries and has scored six touchdowns in 13 career games.