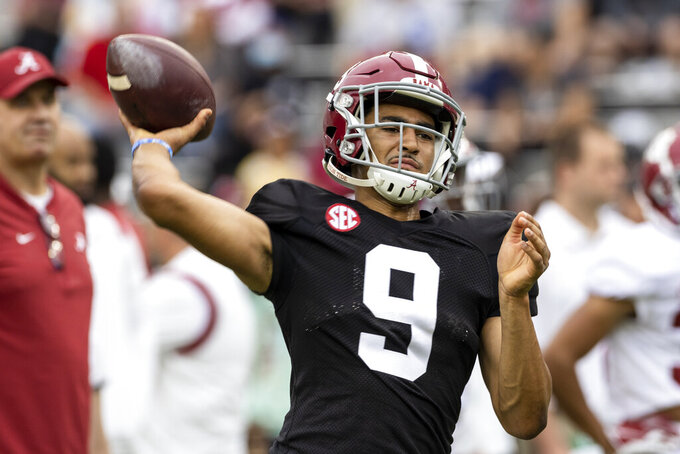 FILE - Alabama quarterback Bryce Young (9) throws before Alabama's A-Day NCAA college football scrimmage on April 16, 2022, in Tuscaloosa, Ala. Led by the Heisman Trophy-winning quarterback, the Crimson Tide are preseason No. 1 and looking every bit a contender for the seventh national championship of coach Nick Saban’s tenure.(AP Photo/Vasha Hunt, File)

It's championship or bust for Nick Saban and Alabama, with no pretensions otherwise.

Saban called the Crimson Tide's 2021 oh-so-close season “kind of a rebuilding year” on a radio show shortly before the start of preseason camp. Players stroll by a “participation trophy” from the national title game loss to Georgia in the cafeteria every day.

Led by Heisman Trophy-winning quarterback Byrce Young and national sack leader Will Anderson Jr., Alabama is preseason No. 1 and looking every bit a contender for the seventh national championship of Saban's tenure.

Participation trophies are practically badges of shame in Alabama's football building and the expectations make any result short of a national title a disappointment.

“It’s basically the runner up trophy,” Tide guard Emil Ekiyor Jr. said. "It has a sign under it that says ‘participation trophy. Are you happy with it?’

“So it’s a little motivation just to see that every day just to remind you this is what we’re really working for, to change the outcome of the season.”

Rebuilding is just par for the course with any roster so typically well-stocked with NFL talent. Saban just gets to do it with new waves of highly rated recruits.

Now, Alabama must replace its top wide receivers, left tackle Evan Neal and tailback Brian Robinson Jr., among others. But perhaps two of college football's best players — Young and Anderson — are back for at least one more year, with some key transfers potentially filling the biggest voids, especially at receiver.

And the defense returns most of its top players, from Anderson to safety Jordan Battle and linebacker Henry To'oTo'o, with former LSU cornerback Eli Ricks joining the mix.

Saban, as he routinely does, dismisses outside expectations while keeping the internal standard sky-high.

“As we always do, it's kind of like here we go again in making predictions about how young people, adolescents, will perform in the future,” Saban said. “So that's why we play the games.”

That 33-18 loss to Georgia in the national championship game after nursing a fourth-quarter lead has served as offseason motivation for a team leading the pack into September once again.

But just in case players need a little reminder:

“We don’t know anything about that (ranking) stuff,” Anderson said. "And the motivation in the locker room is everything that we did last, all the bad things that we did last year.

"That’s the only motivation that we need, that we didn’t get our end goal, that we have a participation trophy sitting in the cafeteria that we have to look at every day.”

Alabama's offensive line, led by top 10 NFL draft pick Neal, didn't consistently dominate like some past Tide groups. That was most notable in allowing seven sacks in an overtime struggle against rival Auburn. Vanderbilt transfer Tyler Steen and 2020 five-star recruit JC Latham are among those vying for starting jobs at the tackle spots. Guard Emil Ekiyor Jr. is an all-star candidate.

Gone are top receivers Jameson Williams and John Metchie III. Transfers Jermaine Burton (Georgia) and Tyler Harrell (Louisville) and talented young targets — including Ja'Corey Brooks — are trying to fill that void. Saban said early in camp that Burton had been the most consistent of the group.

Versatile Georgia Tech transfer Jahmyr Gibbs has gotten the most offseason attention, but Alabama has a deep backfield. That was the case last season, too — until injuries decimated the group behind Robinson. Now, Roydell Williams and Jase McClellan are returning from injuries with a couple of highly touted freshmen joining the mix.

Anderson isn't the only threat to opposing quarterbacks. Dallas Turner polished off his freshman year with 8.5 sacks. A third former five-star recruit, Chris Braswell, also seems poised to emerge as another pass rushing threat. Those two and others could capitalize on the extra attention Anderson draws from blockers.

The Tide's most anticipated games figure to be matchups with two Texas teams led by former Saban assistants: Steve Sarkisian and Texas and Jimbo Fisher's Texas A&M Aggies. The Aggies handed Alabama its only regular-season loss in 2021 and then Fisher and Saban sparred publicly over NIL matters. The other nonconference opponents are less daunting, with visits from Utah State, Louisiana-Monroe and Austin Peay.