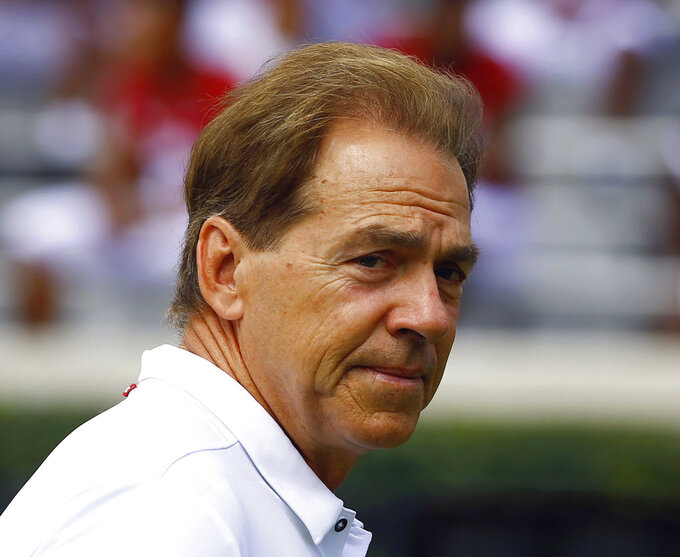 FILE - In this Aug. 4, 2018, file photo, Alabama head coach Nick Saban walks around the field before an NCAA college football practice, in Tuscaloosa, Ala. Saban had to recruit six assistant coaches during the offseason while elevating two others to coordinator positions. He landed a group he's hoping will help the top-ranked Crimson Tide contend for not only more championships but more of the nation’s top prospects. (AP Photo/Butch Dill, File) 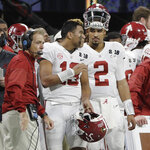 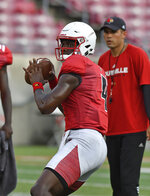 LOUISVILLE, Ky. (AP) — Nick Saban's choice as Alabama's quarterback will finally be revealed publicly when either Jalen Hurts or Tua Tagovailoa walks on the field against unranked Louisville.
Whoever wins will face enormous expectations of leading the top-ranked Crimson Tide to another national championship, an annual quest that begins Saturday night in Orlando, Florida, against a Cardinals team starting life after Heisman Trophy QB Lamar Jackson.
As college football waits to see who will be calling signals for the Tide, Saban hopes a slew of new faces in uniform and on the coaching staff can maintain the same dominance, especially in openers.
"It's a great opportunity to sort of create an identity for this team," Saban said this week. "Nothing that's happened in the past is going to help us in this game. Louisville has a really, really good team. ... It's going to be a very challenging game for our players."
Alabama's degree of difficulty might depend on its annual restocking of top talent, especially Saban's QB choice.
Hurts is 26-2 as the Tide starter but watched the second half of last season's national championship game from the sideline as then-freshman Tagovailoa replaced him and rallied the team past Georgia in overtime. The veteran's early-camp complaint about how Alabama coaches handled the situation created more attention, though Saban has dismissed players being affected.
Louisville coach Bobby Petrino believes his team is prepared for either QB and is more focused on how his offense proceeds without Jackson, now with the NFL's Baltimore Ravens.
Sophomore Jawon Pass inherits the offense and aims to provide a much different look from the 2016 Heisman winner. Slightly bigger (6-foot-4, 231 pounds) than Jackson, he definitely looks to pass the ball but isn't opposed to running as needed.
"I just take what the defense gives me," he said, "make the right reads, make sure we in the best play possible."
Pass will make his first collegiate start behind an offensive line that returns four starters and features experienced receivers. Petrino is trying to keep him focused on utilizing his options and making good decisions rather than facing the defending national champions before a prime-time TV audience.
"I think he's concentrated very hard on doing things right," the coach said. "He's always been a guy that's been in the classroom, likes the game a lot, studies it a lot. So I think he's excited to get going. We just got to make sure that he relaxes and plays and does the things that he does well."
Here are other things to watch as top-ranked Alabama faces Louisville in Orlando:
NEW SECONDARY: With all five fulltime starters gone from the secondary, Alabama will be putting out a new combination of defensive backs, though safety Deionte Thompson did start both playoff games due to injury. The starters include at least one newcomer at cornerback, either junior college transfer Saivion Smith or freshman Patrick Surtain Jr. "A lot of progress has been made," Saban said. "I think we have a lot of new faces (and) guys have to learn how to play together, which they've made improvement in. Communication is something that we've improved dramatically."
CARDS' PASS-CATCHERS: Louisville receivers Jaylen Smith, Dez Fitzpatrick and Seth Dawkins combined for more than 2,300 yards with 20 touchdowns last season and stand as the offense's key strength. Fitzpatrick and Dawkins could be the main targets with Smith expected to play after missing part of camp following an appendectomy.
DOMINANT DAMIEN: Alabama junior running back Damien Harris is 73 attempts shy of the minimum 400 to qualify for the Southeastern Conference's career yards per carry list. But his 6.7-yard average ranks second to Bo Jackson (7.0) for backs with at least 300 carries. He enters the game with 2,194 career yards, which ranks 16th all-time in school history.
DEFENSIVE MAKEOVER: Louisville will have also have a new look from front to back with nine starters gone. The Cardinals will also break in their third coordinator in as many years in Brian VanGorder, whose multiple looks will be needed to contain either Alabama QB and a power ground game.
OPENERS: Alabama is 11-0 in season openers under Saban, outscoring opponents by an average of 28 points. That includes romps over No. 3 Florida State (24-7), No. 20 USC (52-6), No. 20 Wisconsin (35-17) and No. 8 Michigan (41-14).
___
AP Sports Writer John Zenor in Tuscaloosa, Alabama, contributed to this report.
More AP college football: https://apnews.com/tag/Collegefootball and https://twitter.com/AP_Top25