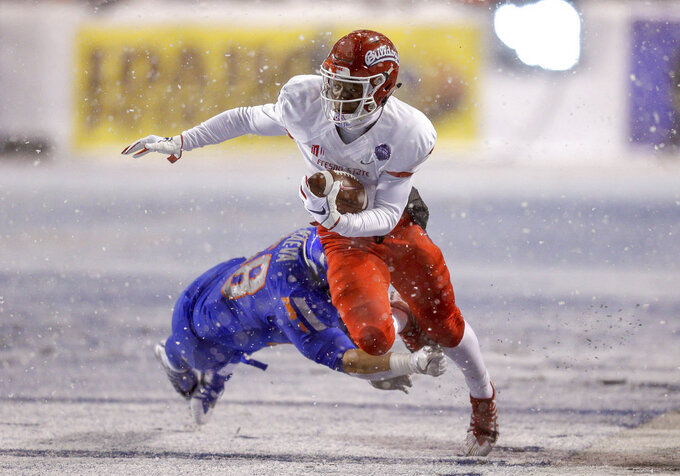 Fresno State wide receiver Derrion Grim (7) is tripped up by Boise State linebacker Tyson Maeva (58) after a reception during the first half of an NCAA college football game for the Mountain West championship Saturday, Dec. 1, 2018, in Boise, Idaho. (AP Photo/Steve Conner) 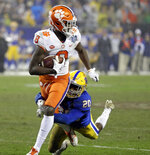 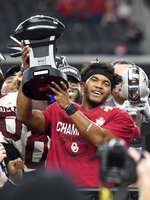 ATLANTA (AP) — In a dramatic twist on last season's national championship game, Jalen Hurts came off the bench to pass for one touchdown and run for another in the fourth quarter, rallying No. 1 Alabama to a 35-28 victory over No. 4 Georgia in the Southeastern Conference title game Saturday.

Heisman Trophy favorite Tua Tagovailoa had to be helped off the field with just over 11 minutes remaining after one of his own linemen stepped on the quarterback's right ankle as he attempted to throw.

Enter Hurts, who led Alabama to the national title game as a freshman but lost the starting job to Tagovailoa. Hurts calmly guided the Crimson Tide (13-0, No. 1 CFP) to tying touchdown with a 10-yard pass to Jerry Jeudy.

After Georgia (11-2, No. 4 CFP) was stuffed on a fake punt near midfield, Hurts took matters into his own hands for the winning score. Spotting an opening up the middle, he took off on a 15-yard TD run with 1:04 left.

This was a reversal of the storyline from last season's national title game, when Tagovailoa replaced an ineffective Hurts at the start of the second half with Alabama trailing Georgia 13-0. The replacement threw three touchdown passes, including a 41-yarder in overtime that gave the Tide a stunning 26-23 victory.

Tagovailoa won the starting job in preseason practice and performed brilliantly during the regular season, throwing 36 touchdown passes with only two interceptions.

The SEC title game took a different path. Georgia put quite a beating on Tagovailoa, who threw two interceptions, spent much of his spare time in the medical tent and was largely ineffective as the Bulldogs built a pair of two-touchdown leads.

ARLINGTON, Texas (AP) — Kyler Murray threw for 379 yards and three touchdowns and Oklahoma beat Texas in the Big 12 championship game, with the Sooners avenging their only loss and making their case for a return to the College Football Playoff.

Murray, the Heisman Trophy-contending dual-threat quarterback, threw two TD passes to Grant Calcaterra. That included an impressive 18-yard score on a third-and-10 play with two minutes left as the Sooners (12-1, No. 5 CFP) won their seventh consecutive game despite being held to fewer than 40 points for the first time in nine games.

Sam Ehlinger was 23-of-36 passing for 349 yards with two touchdowns, and ran for two scores for Texas (9-4), but his final pass was picked off by Tre Norwood at the 1 in the final minute.

Oklahoma is the first Power Five team to win four consecutive outright conference titles since Florida in the SEC in the mid-1990s.

The Sooners went ahead to stay on Austin Seibert's third field goal, a 31-yarder with 12:37 left that was good after ricocheting off the top of the left upright to make it 30-27.

Two plays after Oklahoma's only turnover, when receiver CeeDee Lamb fumbled inside the 10 after a 54-yard catch-and-run with nine minutes left, the Sooners got points anyway. Cornerback Tre Brown sacked Ehlinger in the end zone for a safety.

The 114th meeting between the Red River rivals was their first in a championship game — and the first time since 1903 they had played twice in the same season. Every game since 1929 had been played about 20 miles away at the State Fair of Texas, where the Longhorns beat Oklahoma 48-45 eight weeks ago.

Clemson (13-0, CFP No. 2) is expected to face third-ranked Notre Dame, which was idle Saturday, in the College Football Playoffs on Dec. 29.

The Tigers ran for 301 yards and four touchdowns and averaged 9 yards per carry against Pitt (7-6) on a dreary, rain-soaked night in which Lawrence was limited to 118 yards passing.

Clemson forced three turnovers, including two in the first half that gave the offense the ball inside the Pitt 10 and led to 14 points. The Tigers limited Panthers quarterback Kenny Pickett to 8 yards passing and had nine tackles for a loss.

INDIANAPOLIS (AP) — Dwayne Haskins added five more touchdown passes to his single-season record and Ohio State relied on its staunch defense to hold off a second-half charge from Northwestern for its second straight Big Ten championship.

The Buckeyes (12-1, 9-1 Big Ten, No. 6 CFP) won their third title in five years and their fifth consecutive game — but it's unlikely to get the Buckeyes into the four-team College Football Playoff.

Haskins finished 34 of 41 with 499 yards and one interception.

With the red-shirt freshman filling in for injured McKenzie Milton, the Knights (12-0, No. 8 CFP) won their second straight league title and extended the nation's longest winning streak to 25 games.

Mack also threw for 348 yards and two TDs without an interception.

This time, UCF trailed 38-21 at halftime before scoring touchdowns on five straight possessions in the second half. Darrell Henderson scored on runs of 62, 12 and 82 yards and also throw a 4-yard TD pass to help Memphis (8-5) build its big halftime lead. But the nation's second-leading rusher only gained 3 yards on six carries in the second half, finishing with 210 yards on 16 carries.

With the temperature in the 30s and a constant mix of snow and rain falling, both teams struggled to sustain anything offensively.

With 8:01 left, Boise State's Alexander Mattison ripped off a 34-yard run, muscling his way into the end zone with a defender draped on his back. However, Hoggarth's extra point attempt was blocked by Matt Boetang, leaving it tied.

Brock Purdy had 153 yards passing and a TD for the Cyclones (8-4), who fought through persistent rain and a sloppy field to win their sixth straight home game, tying a school record.

The Bulldogs (7-4) forced turnovers on back-to-back possessions to open the second half. They turned the second one, a pick of Kyle Kempt's pass, into a 19-yard TD pass from Grant Kraemer to Devin Cates and a 24-20 lead in the third quarter. Iowa State responded with a 7-yard touchdown reception by Deshaunte Jones to jump back on top, and Spencer Benton and JaQuan Bailey came up with sacks to force Drake punts. Montgomery's 2-yard run on a third-down-and-1 with 1:26 left sealed it.