No. 1 Alabama tries to keep rolling against Arkansas State 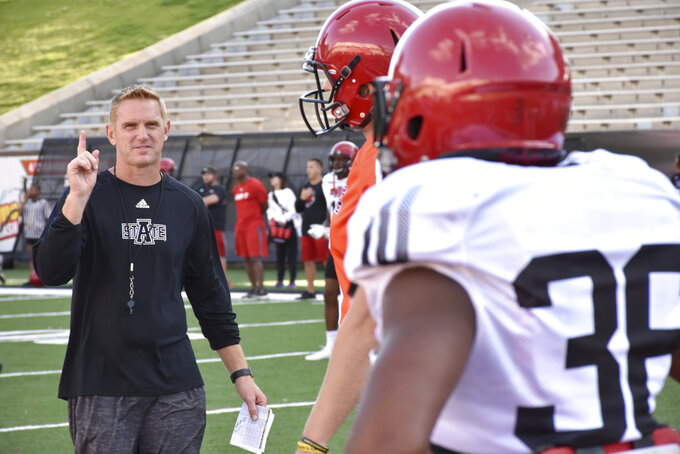 TUSCALOOSA, Ala. (AP) — Arkansas State doesn't have to look too hard for inspiration before facing what coach Blake Anderson calls "the best team on the planet."
The Red Wolves face No. 1 Alabama Saturday a week after fellow Sun Belt Conference power Appalachian State pushed 13th-ranked Penn State to the brink.
Of course, this is the defending national champions and the Crimson Tide looked anything but vulnerable in an opening demolition of Louisville. Still, not bad timing if Anderson's five-touchdown underdogs were in need of a dose of confidence.
"Obviously the spread is what it is because the experts believe you don't belong in the game," he said. "But you've only got to play with them that one Saturday. You don't have to beat them the other 364 days a year. That one Saturday, you've got to play your best."
Just not to Alabama. Not in the past decade. The Tide has won an FBS-record 74 consecutive games against unranked teams and is sporting a hotshot new quarterback in sophomore Tua Tagovailoa.
"This would not be the first time that a great team was upset by a team coming into their place," Anderson said. "We've just got to take the approach that it's going to be us this Saturday."
With Saban prowling the sidelines, Alabama has been awfully good at avoiding letdowns. This one should be easier in that regard, even with the Southeastern Conference opener against Mississippi looming.
Arkansas State, after all, was picked to win the Sun Belt.
"These games are always something that you want to have the kind of respect that you need to prepare properly for because certainly the other team is going to be ready to play," Tide coach Nick Saban said.
Here are some things to know about Saturday's Arkansas State-Alabama game:
HOT QUARTERBACKS
Tagovailoa has dominated the headlines with his first start against Louisville and Saban officially declared him early this week, though even he acknowledge everybody knows" that's the case.
Arkansas State's Justice Hansen, the preseason Sun Belt Conference offensive player of the year, passed for 423 yards and a school-record six touchdowns — all to different receivers — against Southeast Missouri State.
SPEED BALL
Arkansas State ran 79 plays and amassed 685 total yards in the opener. "It's going to be one of those fast-paced, speedball games where they're going to probably go as fast as they can," Saban said.
SPREAD IT AROUND
Both teams and quarterbacks so far have been adept at spreading the ball to different playmakers. Arkansas State had 11 players with receptions in the first game. Alabama had big games from DeVonta Smith, Jerry Jeudy and freshman Jaylen Waddle.
SPECIAL TEAMS
Alabama got big returns from both Jaylen Waddle (punt) and Josh Jacobs (kick). New placekicker Austin Jones made a 39-yard field goal but missed a 27-yard attempt. Meanwhile, Arkansas State's Kirk Merritt had a 50-yard kick return and the 5-foot-5, 184-pound Warren Wand averaged 12 yards on five punt returns. Merritt started his career at Oregon, then went to Texas A&M, then to a junior college before landing with the Red Wolves.
___
More AP college football: https://apnews.com/tag/Collegefootball and https://twitter.com/AP_Top25