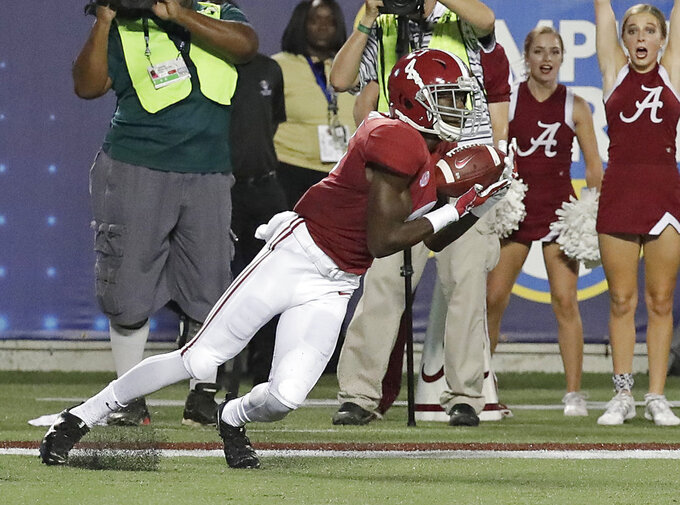 Alabama wide receiver Jerry Jeudy catches an 11-yard pass for a touchdown against Louisville during the first half of an NCAA college football game Saturday, Sept. 1, 2018, in Orlando, Fla. (AP Photo/John Raoux) 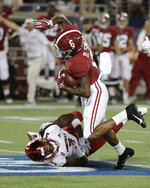 TUSCALOOSA, Ala. (AP) — Alabama can still send a number of talented tailbacks and bruising blockers at opposing defenses, but now they've got to be equally wary of the collection of wide receivers.

The top-ranked Crimson Tide's offense has produced bushels of yards and points — and a number of deep balls — in quarterback Tua Tagovailoa's first two starts.

"We pride ourselves on running the football, but when we're able to distribute the ball like we've been doing — everybody's touching it, they don't know who's going to get it — it's very tough to stop," Tide tight end Irv Smith Jr. said.

Alabama (2-0), which opens Southeastern Conference play Saturday night at Mississippi (2-0), has combined for 108 points and 1,118 yards in romps over Louisville and Arkansas State . Sure, better defenses await, but there's little question this offense can be more diverse with Tagovailoa's ability to spread the ball around, his accuracy downfield and his mobility.

But it's not all Tagovailoa. Two-year starter Jalen Hurts has played extensively in the first two games and passed for two touchdowns against Arkansas State.

It also helps that the Tide has multiple receiving threats after Calvin Ridley accounted for about half the wide receivers' total catches last season.

The result has been 12 catches of 20-plus yards already. Sophomores Jerry Jeudy, DeVonta Smith and Henry Ruggs III and freshman Jaylen Waddle have all turned in big plays. So has Irv Smith, who already has six catches.

"It's a great unit and I think that's really critical for us as an offense, is we don't just have one really explosive guy that can make a lot of plays," left tackle Jonah Williams said. "We have a whole plethora of them. That makes our job easier as an offense. It makes the defense's job harder, trying to stop our running backs and defend all those receivers. It definitely poses a challenge for them."

The sophomore trio has ably filled in after the loss of Ridley, Cam Sims and Robert Foster:

—Jeudy, a five-star recruit from south Florida, has 151 receiving yards and has taken half his eight catches for touchdowns. He capped both of Alabama's opening drives with touchdown catches, including a 58-yarder against Arkansas State.

"We've got good chemistry, me and Tua," Jeudy said.

— DeVonta Smith and Tagovailoa showed their chemistry with that 41-yard game-winning connection against Georgia in the national championship game . Smith has accounted for five of the early 20-yard plays.

He and his fellow receivers have had plenty to celebrate after those first two games.

"When someone makes a play, we'll all be happy," he said. "We'll laugh at the things that are on film when good things happen. It's just a fun group to be around."

— Ruggs, who had six touchdown catches last season, scored on a 31-yarder against the Red Wolves. Of Tagovailoa, he said, "He's developing his confidence as the game goes."

Tagovailoa's emergence has been a big part of the success. Tide coach Nick Saban pointed out his touchdown throw to DeVonta Smith was improvised after he realized a safety didn't cover him "and he wasn't even supposed to be reading that side of the field."

"He does a nice job of keeping his eyes downfield, stepping up in the pocket," Saban said. "There's a couple of third-down plays where he bought some time, stepped up in the pocket and we're able to convert on throws. He's well prepared but he's also very instinctive and he does a good job of keeping his eyes downfield to find people in the middle."