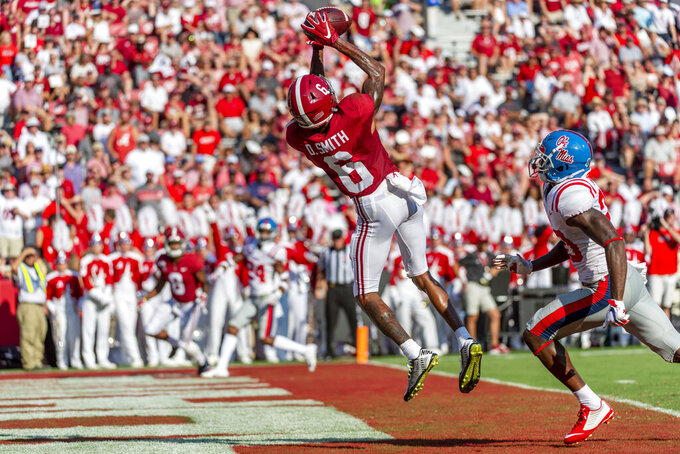 Alabama wide receiver DeVonta Smith (6) leaps into the air for his fourth touchdown reception well ahead of coverage from Mississippi defensive back Keidron Smith (20) during the first half of an NCAA college football game, Saturday, Sept. 28, 2019, in Tuscaloosa, Ala. (AP Photo/Vasha Hunt) 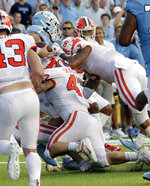 The Tigers (5-0, 3-0 Atlantic Coast Conference) had trouble all day in trying to extend their school-record winning streak to 20 games. They didn't go ahead for good until Trevor Lawrence hit Tee Higgins on a 38-yard touchdown pass with 9:54 left, then came up with the stop after the Tar Heels went for the lead instead of a tie after Javonte Williams' short scoring run.

The Tigers strung out Sam Howell's option run to the right, with Xavier Thomas, James Skalski and Nolan Turner combining to bring down Howell as he turned toward the goal line.

Howell tried to pitch the ball back to Dazz Newsome as he was going down, but Newsome had nowhere to go near the sideline and was pushed out of bounds to put the Tar Heels (2-3, 1-1) short and effectively clinch the win for Clemson — though it was far tougher than expected for the 27-point road favorite.

The Tar Heels fell to 0-11 against No. 1-ranked teams in The Associated Press college football poll.

TUSCALOOSA, Ala. (AP) — Tua Tagovailoa and DeVonta Smith hooked up for five touchdown passes and a few school records in Alabama's victory over Mississippi.

The Crimson Tide (5-0, 2-0 Southeastern Conference) actually trailed for the first time this season before flexing its muscles against the 37 1/2-point underdogs. The Rebels (2-3, 1-1) couldn't even slow down Smith, who sometimes gets overshadowed in a loaded receiving group.

Smith had 11 catches for school records of 274 yards and five TDs, all by early in the third quarter. He had 221 yards by halftime, and added a 27-yard score to punctuate the biggest game of any Tide receiver.

Tagovailoa passed for a school-record six touchdowns and rushed for a seventh. He had matched the record of five TD passes in two straight games but finally eclipsed it in the fourth quarter. He completed 26 of 36 passes for 418 yards.

LINCOLN, Neb. (AP) — Justin Fields threw for three touchdowns and ran for another for Ohio State, and Nebraska quarterback Adrian Martinez was intercepted on three of the Cornhuskers' first four series.

Fields, the transfer from Georgia who has played himself into the first tier of Heisman Trophy candidates, threw for 212 yards and kept alive his streak of no interceptions this season. He added 72 yards rushing. He now has had a hand in 23 touchdowns, 16 through the air.

J.K. Dobbins ran for 177 yards and a TD on 24 carries and became the 11th player in Ohio State history to go over 3,000 career rushing yards.

Hurts also ran for 70 yards and another score for the Sooners (4-0, 1-0 Big 12). The senior transfer from Alabama had 485 yards of total offense, the eighth-most in school history.

The Sooners, who entered the game leading the nation in total offense, gained 642 yards. They have totaled at least 600 yards in each game this season.

Hurts passed for 306 yards and two touchdowns and ran eight times for 60 yards and two more scores in the first half to help Oklahoma take a 34-10 lead.

AUBURN, Ala. (AP) — Seth Williams had eight receptions for 161 yards and two touchdowns, JaTarvious Whitlow ran for three scores and Bo Nix had his best game in an Auburn uniform.

Auburn (5-0, 2-0 Southeastern Conference) started fast, scoring three touchdowns on its first eight plays from scrimmage. It was aided by five Miss State penalties and a fumbled kickoff in the first five minutes that resulted in short fields.

Whitlow galloped for a 30-yard score on Auburn's first play. After the Tigers stifled Tommy Stevens and the Miss State offense for minus-22 yards on their first two possessions, Nix and receiver Anthony Schwartz added red-zone rushing touchdowns for a 21-0 lead. Save for a lost fumble by Williams with 4:30 left in the second quarter, Auburn scored a touchdown on every possession in the first half.

Penn State transfer Stevens earned the nod at quarterback for the Bulldogs (3-2, 1-1), but Garrett Shrader took over in the first quarter after Stevens sustained an injury on a big hit.

MADISON, Wis. (AP) — Jonathan Taylor ran for 119 yards and his 11th touchdown of the season and Wisconsin got two scores from its defense.

After allowing 81 yards rushing through the first three games, the Wisconsin defense surrendered 97 yards on the ground to Northwestern (1-3, 0-2).

Trask's hot streak ended with an incompletion to Jacob Copeland early in the third quarter. He responded with a perfect throw to Kyle Pitts in the corner of the end zone for his second TD pass of the afternoon.

SOUTH BEND, Ind. (AP) — Julian Okwara had three sacks of Notre Dame's eight sacks and caused a fumble that was returned for a touchdown as the Fighting Irish overcame a halftime deficit to beat Virginia.

The Fighting Irish (3-1), coming off a 23-14 loss at No. 3 Georgia, trailed 17-14 at the break and then had the Cavaliers (4-1) complete a successful onside kick to open the second half. The Notre Dame defense held, setting the tone for the second half.

Jamir Jones started the Irish defensive onslaught in the third quarter when he sacked and stripped Virginia's Bryce Perkins of the football and defensive tackle Myron Tagovailoa-Amosa recovered it in midair before rumbling 48 yards to the Virginia 7.

Tony Jones, who had three touchdowns and a season-high 131 yards on 18 carries, scored two plays later from the 2 to give the Irish a 21-17.

Brandon Smith caught both of Stanley's TD throws. Iowa gained 644 yards, its most in coach Kirk Ferentz's 21 seasons in charge. Iowa had 358 yards in the first half and scored on its first four drives, a stretch headlined by an 18-yarder from Stanley to Smith that made it 24-0 midway through the second quarter.

SEATTLE (AP) — Salvon Ahmed rushed for a career-high 153 yards, including an 89-yard touchdown run in the third quarter, and Washington beat Southern California.

Ahmed missed last week's win at BYU with a leg injury. But he was back in a big way against the Trojans, breaking off the longest run play for Washington (4-1, 1-1 Pac-12) in 25 years and moments after USC quarterback Matt Fink made his biggest mistake of the day.

With USC (3-2, 2-1) trailing 20-7 and driving, Fink failed to see Elijah Molden dropping into a zone and had a pass intercepted at the Washington 1 as he tried to hit Michael Pittman Jr. Two plays later, Ahmed waited for the hole to open then burst into the open field and ran away from the defense. It was Washington's longest run play since a 91-yard TD run by Napoleon Kaufman in 1994 against San Jose State.

Anthony Gordon may have set a conference-record nine touchdown passes last week, but it was Huntley who stood out from the get-go. He completed eight of his first 10 passes for two TDs, notwithstanding a wide-open drop in the end zone.

The Cougars only managed seven plays for 26 yards in the third quarter as the Utes took control.

After becoming the first WSU quarterback to top 400 yards passing in his first four starts, Gordon threw for 229 yards but had two interceptions, including Francis Bernard's pick with 5:26 to play.

Utah's defense only allowed one play over 20 yards the entire game.

Samson Nacua, filling in for leading receiver Britain Covey, had five catches for 90 yards, and Bryan Thompson had four receptions for 111 yards.

Max Borghi had 51 yards rushing and nine catches for 70 yards for the Cougars.

ANN ARBOR, Mich. (AP) — Shea Patterson accounted for three touchdowns in the first half and ran for a fourth score in the third quarter for Michigan to rout Rutgers 52-0 on Saturday.

The Wolverines (3-1, 1-1 Big Ten) enjoyed a confidence-boosting win following a humiliating loss at Wisconsin. The Scarlet Knights (1-3, 0-2) have not won a conference game since the 2017 season.

Patterson played two-plus quarters and was 17 of 23 for 276 yards with one TD and one interception.

The two-time defending AAC champions improved to 29-2 since the start of 2017, bouncing back from a 35-34 loss at Pittsburgh that stopped a league- and school-record 25-game regular-season win streak.

After Mond's pass was picked off in the end zone, the Razorbacks failed to get a first down and punted after Ben Hicks was sacked at the 2. That set up the short drive for Mond's 3-yard TD pass to Davis with 12:21 left that put Texas A&M (3-2, 1-1 Southeastern Conference) ahead 28-24.

The Razorbacks (2-3, 0-2) lost their 13th consecutive SEC game, including all 10 under second-year coach Chad Morris. They have lost eight in a row against Texas A&M since the Aggies left the Big 12.

STILLWATER, Okla. (AP) — Chuba Hubbard ran for 296 yards and a touchdown on just 25 carries, and Oklahoma State shut down Kansas State's own vaunted rushing attack in a weather-delayed victory.

Hubbard hardly carried at all in the first quarter for the Cowboys (4-1, 1-1 Big 12), who built a 13-0 lead when the game was halted more than an hour in the second quarter due to lightning. But the breakout star finished with runs of 53, 84 and 44 yards in his dominant performance.

Spencer Sanders added 153 yards passing and a touchdown for Oklahoma State. Most of that went to Tylan Wallace, who hauled in eight passes for 145 yards.

After Coghlin's kick gave the Spartans (4-1, 2-0 Big Ten) a 34-31 lead, Indiana tried to lateral its way down the field on its final offensive play, but that resulted in a fumble that Michigan State recovered for a touchdown.

Brian Lewerke threw for 300 yards and three touchdowns for the Spartans, who held off the upset-minded Hoosiers (3-2, 0-2) on a rare day when Michigan State's defense struggled. Michael Penix Jr. returned for Indiana after missing the previous two games with an undisclosed injury — and he gave the Spartans fits, completing 20 passes in a row during one stretch.