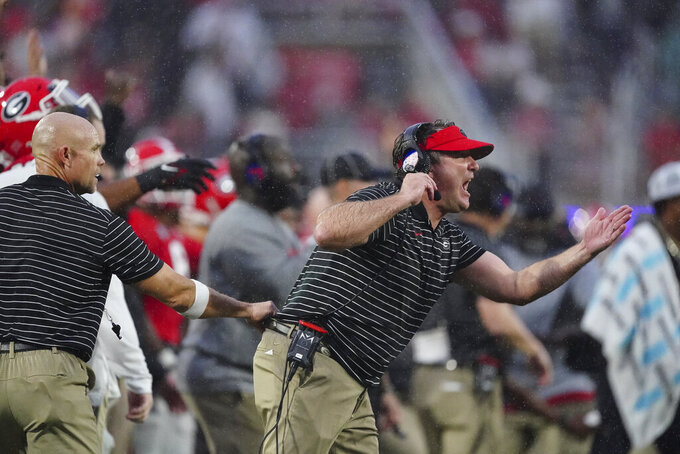 An assistant coach restrains Georgia head coach Kirby Smart, right, as he yells to his players on the field during the second half of an NCAA college football game against Tennessee, Saturday, Nov. 5, 2022 in Athens, Ga. (AP Photo/John Bazemore)

Neither top-ranked Georgia nor coach Kirby Smart buy the notion that their toughest test is behind them.

The challenges never really stop for Smart's Bulldogs (9-0, 6-0 Southeastern Conference) — the target is always there as defending national champions and being No. 1 in the AP Top 25 and the latest College Football Playoff rankings.

So, Smart said, bring on the clanging cowbells and everything else that'll come Saturday night at Mississippi State (6-3, 3-3) in the battle of the Bulldogs.

“If you have good DNA, it travels with you,” Smart said. "We don’t do all the exercises that you do to build composure to not use it. We anticipate it’s an opportunity to flex our composure muscle, our resiliency muscle, our connection muscle, and our toughness muscle.

“We don’t do all that lifting and preparing to not use it.”

Record-setting junior quarterback Will Rogers leads the SEC's No. 2 passing attack (325.6 yards) and No. 8 unit overall (406.20), one that has incorporated more running.

Georgia counters with the league's No. 2 passer in Stetson Bennett — who passed for two of his three scores against the Volunteers — and a top-ranked defense allowing a league-low 256.6 yards per game.

The Bulldogs are also pretty stout against the pass (179.11). But they'll face a scheme that likes to snap it quick like Tennessee and — for a change — keep defenses guessing whether they'll come at them through the air or on the ground.

“Of course, they throw the ball well," sophomore inside linebacker Smael Mondon Jr. said of Mississippi State. "A part that a lot of people look over is them running the ball. They have a pretty solid run game, and they have been trying to improve over the last couple of years. It is a balance between both of those.”

MSU is coming off a 39-33 overtime victory over Auburn that began with the Bulldogs jumping to 24-3 lead against a Tigers squad adjusting to an interim coach.

Auburn rallied to lead twice in the final five minutes before the Bulldogs forced OT and won on Jo'Quavious Marks' 6-yard TD run. The Bulldogs can't afford to fall behind against Georgia, and as last week proved, have to stay on the gas if they manage a lead.

“We’ve just got to come out of the locker room with more energy, more urgency,” MSU safety Collin Duncan said. “We’re two teams that pride ourselves off being physical, playing hard-nosed defense. We've just got to go into our stadium, play hard and play for the whole 60 minutes.”

Daijun Edwards leads four Georgia running backs with 240 or more rushing yards. Edwards, Kenny McIntosh and Kendall Milton have shared the lead role. Coach Kirby Smart said Tuesday that McIntosh is “limited some” by a deep thigh contusion after rushing for 52 yards last week. Edwards had 46 while Stetson Bennett had the team’s only rushing TD last week against Tennessee. The Bulldogs out-rushed the Vols 130-94.

Somewhat overlooked is a MSU defense that ranks sixth in the SEC (360.8 yards) and leads the league with nine interception returns for 199 yards. Emmanuel Forbes leads the SEC with five picks, returning two for touchdowns.

Georgia last week lost linebacker Nolan Smith, one of only three returning starters on defense, for the season with a torn pectoral muscle. His replacement, Robert Beal, left last week’s game in the third quarter with a neck injury. Smart said Tuesday that Beal’s injury was a “stinger” and that he hoped for his return this week. Chaz Chambliss took over for Beal against the Vols.

TURN UP THE PRESSURE

After having 10 sacks through eight games, the Georgia defense recorded six sacks in the win over Tennessee. Defensive back Javon Bullard had the first two sacks of his career.

Mississippi State faces Georgia as the No. 1 team for the first time and seeking only its second win against the nation's top team in 12 chances. The Bulldogs have faced Alabama eight times — winning 6-3 in 1980 — Tennessee twice and LSU once. They are 6-19 against the “other” Bulldogs and dropped the previous meeting 31-24 in Athens, Georgia, two years ago. Coach Mike Leach has a win against No. 1, topping Texas in 2008 while at Texas Tech.