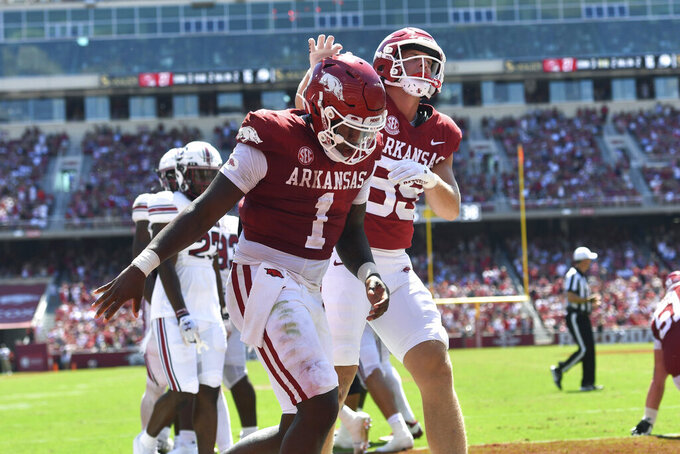 Arkansas quarterback KJ Jefferson (1) clelbrates with tight end Nathan Bax (89) after running for a touchdown against South Carolina during the second half of an NCAA college football game Saturday, Sept. 10, 2022, in Fayetteville, Ark. (AP Photo/Michael Woods)

FAYETTEVILLE, Ark. (AP) — The last image of Missouri State coach Bobby Petrino in Fayetteville is one Arkansans would like to forget.

Neck in a brace and face bruised fresh off a motorcycle accident, Petrino sat in front of reporters one final time in Northwest Arkansas back in 2012. It was the onset of a well-documented scandal, which led to his firing and years of struggles for the Razorbacks.

Petrino returns when his Bears visit the No. 10 Razorbacks on Saturday. He's not sure how the trip will affect him.

“I think we’ll see when I get there,” he said. “I’m sure there will be some feelings and emotions when I step in the stadium, but it’s really not about me. It’s about our football team.”

The Bears hadn’t been to the playoffs since 1990 before Petrino arrived, but he has taken them back to back-to-back years and has them ranked No. 5 in the FCS, three seasons removed from winning a single game.

Arkansas coach Sam Pittman was also hired in 2020 and tasked with a full rebuild. He inherited a team with 19 straight SEC losses. Since then, he has elevated the Razorbacks to a top 10 ranking two straight years. That hasn't been done since the Petrino era.

Petrino's return is a coincidence. When the schools agreed to play in August 2016, Petrino was coaching Louisville. The game was originally slated for 2021 but had to be pushed back to 2022 after the Razorbacks scheduled a game against Arkansas-Pine Bluff. Per NCAA rules, FBS teams are allowed only to count one win over an FCS team per season toward bowl eligibility.

Last year, the Bears took Oklahoma State down to the wire in Stillwater, a team ranked No. 7 in the FBS by year’s end. Trailing 23-16 in the game’s final 30 seconds, the Bears drove into the red zone with a chance to tie.

“They’ve got a good team,” Pittman said. “They almost beat Oklahoma State last year at the beginning of the year and Oklahoma State beat Notre Dame in the Fiesta Bowl, so we know that we have to be ready for a fine team coming in here.”

PROUD OF THE POLL

Following the AP Top 25 poll release Sunday, Pittman tweeted a graphic of the Razorbacks' No. 10 designation. Some replies didn’t settle well with Pittman.

“I think it’s a big deal, I do,” Pittman said of the ranking. “Everybody looks at the negative all the time, you know. I got some responses, ‘Well it doesn’t matter.’ Well, I ain’t tweeting it out to you guys, or a 50-year-old man, I’m trying to use it as recruiting. We’re proud of it.

Petrino isn’t the only person returning to Fayetteville.

Jordan Jones, a three-star class of 2016 recruit out of Smackover, Arkansas, spent 2016-19 with the Razorbacks. He earned a bachelor’s degree before transferring to Cincinnati. He was part of the Bearcats’ playoff team in 2021-22, then landed in Springfield this offseason to play his final season with the Bears.

Between redshirt years, injury-ridden seasons, and the extra COVID-19 year, he has been on a Division I roster since 2016.

Missouri State defensive backs coach Tramain Thomas played for Petrino at Arkansas. He was second-team All-SEC at safety in 2010.

Bears junior receiver Tyrone Scott racked up 1,110 receiving yards in 2021, the most ever in a single season for Missouri State. His chemistry with quarterback Jason Shelley has not skipped a beat to begin 2022.

In the season opener at Central Arkansas, he hauled in eight receptions for 160 yards, followed with 96 against Tennessee-Martin. He’s already risen to the 17th-most receiving yards in Missouri State history and could set the school record (2,221 yards) if he’s able to stay healthy and maintain production.

Pittman was not pleased with his team's 10 penalties for 122 yards last week.

“That number should be anywhere from two to six,” he said. “They’re going to call a couple holdings. I get it. But now 10? That’s on me. I, evidently, let that go at practice. I didn’t think I had, but evidently I have. I promise you it’s an emphasis.”