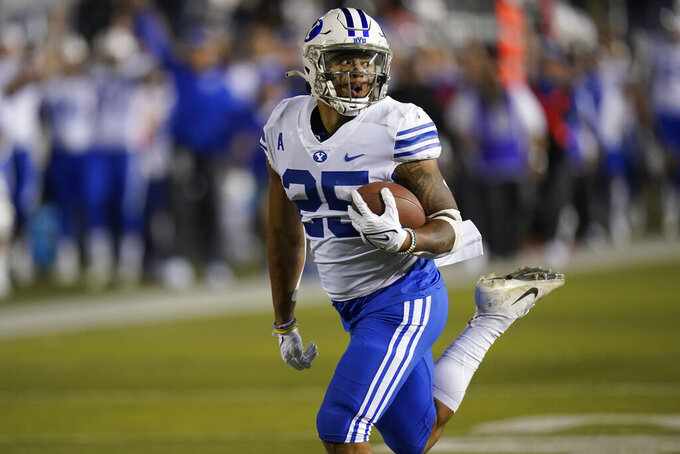 BYU's Tyler Allgeier (25) carries the ball before scoring against Utah State in the first half during an NCAA college football game Friday, Oct. 1, 2021, in Logan, Utah. (AP Photo/Rick Bowmer)

Line: BYU by 3 points, according to FanDuel Sportsbook.

A chance for Boise State to turn the tables on No. 10 BYU. When Boise State traveled to Provo, Utah, in 2019, it was the Broncos who were highly ranked and the Cougars who sprang the upset. Boise State is looking to spoil homecoming at LaVell Edwards Stadium. BYU will try keep its perfect run in tact and join five other versions of the Cougars who also started 6-0 (1979, ’84, ’01, ‘08 and ’20). The Cougars have yet to trail this season. They’re 27-6 under coach Kalani Sitake when scoring first. Boise State is coming off a loss to Nevada and will try to avoid dropping back-to-back games in a season for the first time since 2016. The Broncos lost to Air Force that year in the regular-season finale and then to Baylor in the Cactus Bowl.

Boise State wide receiver and team captain Khalil Shakir against the BYU secondary. Shakir is 11th in the nation with 103.6 yards receiving per game and tied for 22nd with four touchdowns. He could see plenty of D’Angelo Mandell, the BYU cornerback who has three pass breakups and 19 tackles. Free safety Malik Moore has two interceptions this season.

Boise State: Safety JL Skinner has 51 tackles this season. That's the most among defensive backs in the country. He also forced two fumbles against UTEP on Sept. 10.

BYU: RB Tyler Allgeier is coming off a 218-yard, three-touchdown performance at Utah State. He's eighth in the nation with 564 yards rushing.

The last time Boise State beat a top-10 opponent as an unranked team was at No. 8 Fresno State in 2001. ... The Broncos are 5-3 versus top-10 teams. ... BSU has been flagged just 24 times. The 4.8 penalties a game are tied for 15th fewest in the nation. ... Boise State has scored in 304 straight games, the sixth-longest active winning streak in the nation. The longest active streak belongs to Florida with 415. ... BSU QB Hank Bachmeier is 13-5 as a starter. ... BYU is 14-2 under Sitake when ranked. ... The Cougars are plus-8 in turnovers. ... There have been 13 different BYU players catch passes this season, a list that includes QBs Jaren Hall and Baylor Romney.