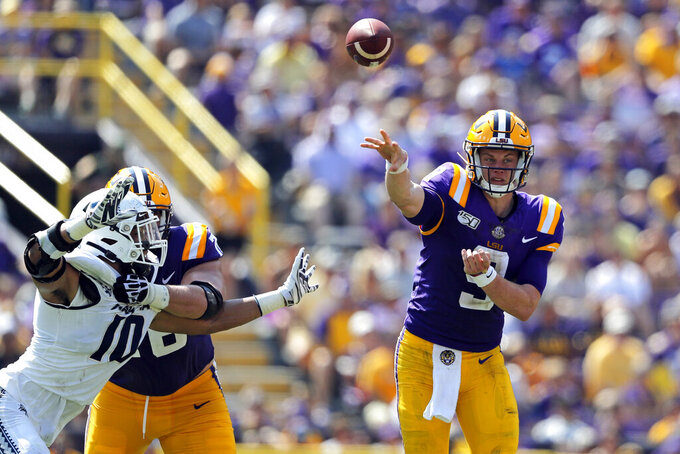 GAINESVILLE, Fla. (AP) — Lamical Perine ran 88 yards for a touchdown in the fourth quarter, Florida's defense delivered another gem and the No. 10 Gators beat seventh-ranked Auburn 24-13 in the Swamp on Saturday.

Perine broke linebacker K.J. Britt's tackle at the line of scrimmage and scampered down the sideline for the program's longest TD run in more than 30 years. It gave the Gators (6-0, 3-0 Southeastern Conference) extra breathing room in a game they never trailed.

The biggest reason they led throughout: defense.

Jon Greenard and David Reese were the stars of the show for Florida, which has given up a measly 16 points in four home games this season.

Nix completed 11 of 27 passes for 145 yards for Auburn (5-1, 2-1), with a touchdown and three interceptions. He was sacked three times, once for a 22-yard loss in which he looked completely lost.

Florida's Kyle Trask was equally turnover-prone, although much more efficient through the air. He was seemingly knocked out of the game in the second quarter when Auburn star Derrick Brown landed on his left leg. Trask eventually walked to the locker room with no assistance and returned to a raucous ovation.

He completed 19 of 31 passes for 234 yards and two touchdowns. He also fumbled three times.

ANN ARBOR, Mich. (AP) — Zach Charbonnet had a 2-yard touchdown run to give Michigan an early double-digit lead and its defense did the rest against Iowa, forcing four turnovers and making eight sacks.

The Wolverines (4-1, 2-1 Big Ten) were held scoreless over the final three quarters because they could not run or pass effectively, scoring just three points off the Hawkeyes' turnovers.

Iowa (4-1, 1-1) failed to take advantage of favorable field position on its final two drives with a chance to extend the game or possibly win it with a touchdown and 2-point conversion. The Hawkeyes turned the ball over on downs at the Michigan 44 with 37 seconds left after a penalty- and sack-filled drive forced them to punt with a fourth-and-36 at midfield on the previous possession.

Iowa running back Mekhi Sargent fumbled on his team's first snap, giving up the ball at the Hawkeyes 18. Michigan, though, had to settle for a field goal after gaining just 6 yards. The Wolverines took a 10-0 lead on their next drive, which started with a 51-yard pass to Nico Collins and finished with Charbonnet's 2-yard run.

Michigan's Shea Patterson was 14 of 26 for 147 yards with an interception.

Iowa's Nate Stanley was 23 of 42 for 260 yards with three interceptions, ending a 139-pass streak without getting picked off.

Tennessee (1-4, 0-2) has lost its last six matchups with Football Bowl Subdivision teams and is off to its slowest start since 1988, when it dropped its first six games. Tennessee's lone win this season was a 45-0 blowout of Football Championship Subdivision program Chattanooga.

The Buckeyes (6-0, 3-0 Big Ten) had to work to figure out Michigan State's defense to start, after blowing out every opponent through the first five games. They gained just 16 yards on 16 plays in the first quarter, but got unstuck and put away the Spartans (4-2, 2-1) with big plays.

Dobbins ran the ball 24 times, averaged over 7 yards per carry and had an electrifying 67-yard breakaway for a touchdown late in the first half.

Fields finished 17 for 25 for 206 yards and threw an interception for the first time in his first 175 pass attempts as a Buckeye. He also was sacked three times — twice by linebacker Joe Bachie.

Burrow completed 27 of 38 passes for 344 yards and was intercepted once on a tipped pass before being replaced by Myles Brennan in the fourth quarter. Burrow also rushed for 42 yards and a touchdown. He has completed 78.3 percent of his passes for 1,864 yards and 22 touchdowns through five games.

LAWRENCE, Kan. (AP) — Jalen Hurts threw for 228 yards and two touchdowns, ran for 56 yards and two more TDs and added another line to his Heisman Trophy resume in leading Oklahoma.

That allowed them to cruise to their 22nd straight true road win, the second-longest streak since at least World War II in major college football. Bud Wilkinson's Sooners won 25 in a row from 1953-58. It also allowed Oklahoma to build momentum for next weekend's Red River Showdown with No. 11 Texas.

Baun's three sacks led a Wisconsin defense to its third shutout of the season. The Badgers held Kent State (2-3) to 124 yards of total offense. Chris Orr added two sacks for a unit that has allowed four touchdowns through five games.

Dustin Crum and Woody Barrett combined for just 64 yards on 10-of-17 passing.

The Fighting Irish (4-1) had their way with the Falcons (1-4), a first-time opponent from the Mid-American Conference whose campus is just 164 miles away. The margin matched Notre Dame's winning difference in a 66-14 victory over New Mexico this season and was Notre Dame's first shutout since 2014.

The Longhorns had plenty of motivation for this one. Ehlinger and several Texas players were upset last year after several Mountaineers flashed "horns down" signs during West Virginia's 42-41 victory in Austin. Ehlinger noted in a tweet that was later deleted: "Do not think it will be forgotten."

Ehlinger finished 18 of 33 for 211 yards. He threw just his second interception of the season that West Virginia turned into a third-quarter field goal.

STATE COLLEGE, Pa. (AP) — Sean Clifford threw for 264 yards with three touchdowns and ran for another score for Penn State.

The Nittany Lions (5-0, 2-0 Big Ten) were dominant on defense, with 10 sacks, one shy of the school single-game record. The Boilermakers were held to 104 yards.

Penn State jumped out fast, scoring on its first four drives, none lasting longer than 3:41.

EUGENE, Ore. (AP) — Justin Herbert threw for 214 yards and a late touchdown to extend his streak of consecutive games with a scoring pass to 33, and Oregon overcame an uncharacteristically slow start.

The Ducks, whose only loss came in the opener against Auburn, were held scoreless in the first half by the surprisingly resilient Golden Bears (4-2, 1-2).

STANFORD, Calif. (AP) — Cameron Scarlett rushed for a career-high 157 yards and a touchdown, quarterback Davis Mills had another impressive game in place of injured starter K.J. Costello before apparently getting hurt himself, and Stanford pulled off its biggest win of the season.

The Cardinal (3-3, 2-2 Pac-12) extended their home winning streak to six games, dating to 2007, against the Huskies with a plodding, methodical offense that kept Washington quarterback Jacob Eason on the sidelines for long chunks of the game.

Stanford dominated Washington (4-2, 1-2 Pac-12) in nearly every offensive category and held an 18-minute edge in time of possession.

Mills was crisp until coming out of the game for an unknown reason in the middle of a scoring drive in the fourth quarter. Mills was 21-of-30 passing for 293 yards and a touchdown.

Khalil Shaker caught seven passes for 111 yards and a TD, John Hightower had four catches for 105 yards, including a 76-yard touchdown reception that make it 14-0 with 13:38 left until halftime for Boise State (5-0, 2-0 Mountain West).

UNLV's Kenyon Oblad, a redshirt freshman quarterback, made his first career start in place of Armani Rogers, who sprained a knee in last week's 53-17 loss at Wyoming.

DALLAS (AP) — Shane Buechele threw a 25-yard touchdown to James Proche in the third overtime and SMU beat Tulsa, coming back from a three-touchdown deficit in the fourth quarter to win in its first game as a ranked team in 33 years.

SMU (6-0, 2-0 American) this week moved into the AP poll for the first time since October 1986, before NCAA sanctions that included the death penalty. The Mustangs didn't field a team in 1987 and 1988.

Xavier Jones ran for 121 yards and scored two game-tying touchdowns for SMU before he fumbled in the second overtime. But Tulsa couldn't take advantage when Jacob Rainey's 43-yard field goal attempt was wide left. Tusla (2-3, 0-1) had the ball to start the third overtime, and went to a different kicker after failing to get a first down. But Zack Long was wide left on a 42-yard attempt.