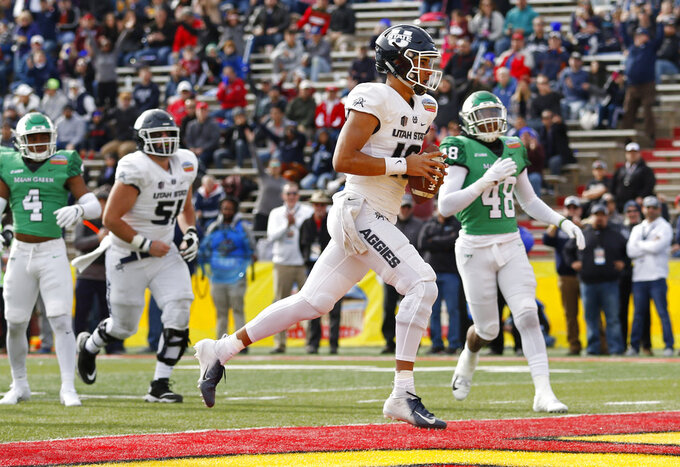 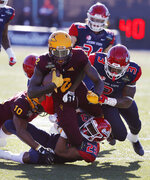 LAS VEGAS (AP) — Ronnie Rivers rushed for 212 yards and two touchdowns, Anthoula "Tank" Kelly had a 70-yard interception return for a touchdown and No. 19 Fresno State beat Arizona State 31-20 in the Las Vegas Bowl on Saturday.

Marcus McMaryion rushed for a touchdown and was 15-of-29 passing for 176 yards to help the Bulldogs (12-2) set a school record for wins in a season. He also threw two interceptions.

Eno Benjamin rushed for 118 yards a one touchdown for the Sun Devils (7-6) in their third straight bowl loss. Manny Wilkins threw for 129 yards, with a 3-yard scoring pass to Kyle Williams and two interceptions.

Rivers put Fresno State back in front 24-20 with a 68-yard touchdown run up the middle in the third quarter and had a 5-yard scoring run in the fourth quarter to seal Fresno State's second win over a Pac-12 opponent this season.

Wilkins sustained an apparent knee injury on the final pass of his college career, which was intercepted by Juju Hughes.

North Texas quarterback Mason Fine was injured in the first quarter, and the Mean Green ended up using four quarterbacks. Jalen Guyton had four catches for 103 yards a score.

ORLANDO, Fla. (AP) — Darius Bradwell rushed for a career-best 150 yards and two touchdowns to lead Tulane to its first postseason victory in 16 years, a 41-24 win over intrastate rival Louisiana-Lafayette in the Cure Bowl.

Justin McMillan improved to 5-1 as the Green Wave's starting quarterback, tossing a first-quarter TD pass to Terren Encalade and running for a late score while accounting for 217 yards total offense — 145 passing and 72 rushing.

Bradwell scored on runs of 15 and 4 yards while setting bowl records for rushing attempts (35) and yards for Tulane (7-6), which won a bowl game for the first time since the 2002 Hawaii Bowl.

The Green Wave also got a rushing TD from Amare Jones and outgained the Ragin' Cajuns 337 yards to 84 on the ground.

Lousiana-Lafayette (7-7) rallied from a 24-7 deficit to pull within three points on Jarrod Jackson's 15-yard TD reception with just over 10 minutes remaining.

McMillan put the game away, leading a 75-yard drive Bradwell finished with his second TD and later scoring himself on a 16-yard run that put Tulane up 41-24.

Bass also made a 50-yarder on the final play of the first half.

Eastern Michigan (7-6) had delivered its own big fourth-down play to take the lead for the first time.

Georgia Southern took over at its own 25 with a triple-option offense that attempted fewer passes than every FBS team but Army. Werts completed a 15-yard pass to tight end Ellis Richardson, but Georgia Southern fittingly covered most of the 52 yards with runs.

Camerun Peoples had a 63-yard touchdown run for the Mountaineers (11-2), which gave Appalachian State alum and former player Mark Ivey a victory in what might have been his only chance to coach his alma mater. Ivey took over on an interim basis after Scott Satterfield left for Louisville.

ATLANTA (AP) — Lamar Raynard passed for 292 yards and two touchdowns and Malik Wilson returned a kickoff for the game-sealing touchdown for North Carolina A&T in the Celebration Bowl.