No. 10 Georgia looks to rebound against Bowden-led Wildcats 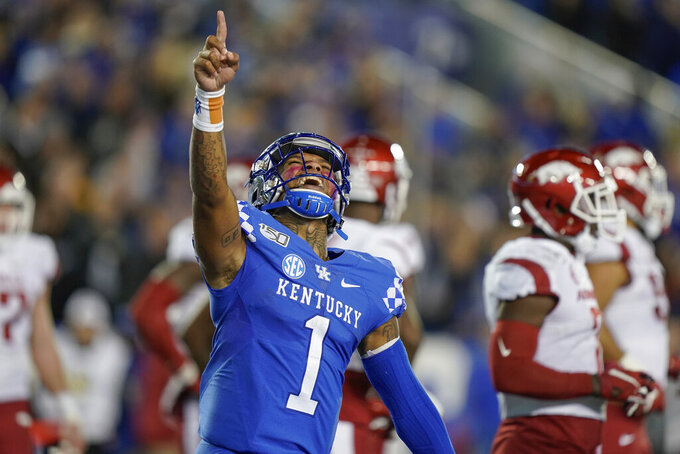 Georgia hopes to bounce back from last week's 20-17 double-overtime loss to South Carolina, when it also was favored by more than three touchdowns. The Bulldogs can't afford another loss as they try to regain their momentum and remain close to the top of the SEC East. Kentucky is looking for its second straight SEC win after beating Arkansas 24-20 last week to snap a three-game losing streak.

After having its running game held about 80 yards below its average by South Carolina, Georgia will try to take pressure off quarterback Jake Fromm by again focusing on its run-first attack. Kentucky ranks only 82nd in the nation in rushing defense and has allowed 14 touchdowns on the ground. Tailback D'Andre Swift said this week he hopes Georgia shows more creativity by getting the ball to its playmakers in space.

Kentucky: Lynn Bowden moved from wide receiver for his first start at quarterback last week and ran for 196 yards and two touchdowns while passing for 78 yards and a touchdown. He leads the SEC with 896 all-purpose yards, good for sixth in the nation.

Georgia: Fromm, who threw no interceptions in the Bulldogs' first five games, will be looking to return to his top form after throwing three interceptions and losing a fumbled snap in the loss to South Carolina.

Kentucky has lost nine straight in the rivalry. Coach Mark Stoops is 0-6 against Georgia. The Wildcats' last win in the series came in 2009 in Athens when they rallied from a 20-6 halftime deficit for a 34-27 win. Last year's matchup was a top-10 showdown when No. 6 Georgia beat No. 9 Kentucky 34-17 to win the SEC East. ... Fromm set career highs for pass attempts (51), completions (28) and interceptions last week. ... Georgia ranks fourth in the SEC with its average of 38.5 points. Kentucky averages 23.5. ... Swift ran for 156 yards and Elijah Holyfield added 117 yards rushing, both career highs, in last year's game.