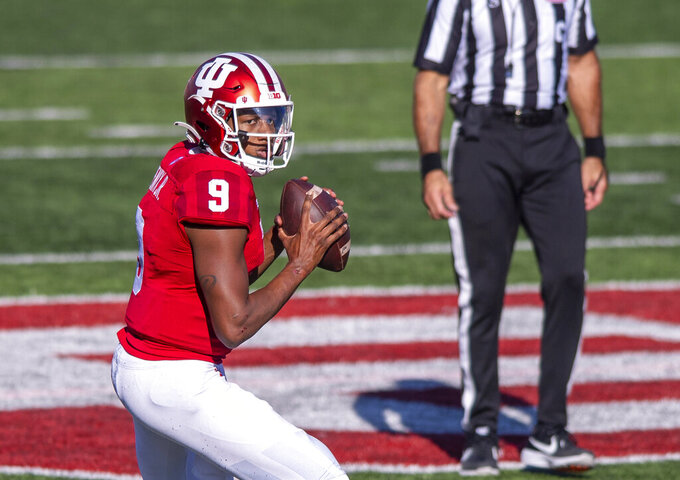 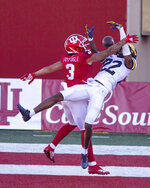 Last season's 34-28 victory at Maryland gave the Hoosiers a badly needed confidence boost, sent expectations soaring and renewed the motivation to defy critics of the program. At the time, Allen sensed Reese Taylor's game-sealing interception with 82 seconds left would make an impact.

Today, he realizes it changed everything. Three games into this season, Taylor is part of a fearless secondary that has helped the Hoosiers reach new heights.

At 3-0, they share the Big Ten East lead with No. 3 Ohio State. On Sunday, Indiana climbed to No. 10 in the rankings — its highest mark since September 1969, two months after the moon landing. And Allen insists this is only the start of grander goals.

Indiana is off and running.

After going more than a quarter-century between Top 25 appearances and contributing annually to new punch lines, the Hoosiers are punching back and checking off goals as they take the field.

In Week 1, they beat No. 8 Penn State for their first upset of a top-10 foe since 1987. After winning at Rutgers, the Hoosiers cracked the top 15 for the first time since 1988. Saturday's win over No. 23 Michigan snapped a 24-game losing streak in the series, a mark that was tied for the longest active skid against one team in the entire Bowl Subdivision.

Winning this weekend, at Michigan State, wouldn't just return the Old Brass Spittoon to Bloomington for the second time since 2007, it would give the Hoosiers a school-record tying fifth consecutive conference win.

They're still not satisfied.

“As the staring quarterback most of the time when there are big wins, you get most of the recognition," Michael Penix Jr. said Monday. “So I have to show the team that we can’t be complacent. Obviously, we’ve accomplished some great things this season, but I've got to make sure they (players) stay focused and locked in."

Penix's sentiment hasn't always been the prevailing philosophy around the Hoosiers locker room.

Over the past 30 years, so many promising starts and moments quickly came crashing down. Bowl bids became elusive, even with Antwaan Randle El at quarterback. Coaches came and went. Signature wins were scarce, and every time it seemed the program was poised for an ascension, something unforeseen derailed it.

But after being promoted from defensive coordinator to head coach in December 2016, Allen created a long-term plan with a message that inspired players to put Indiana football back on the national map.

Allen traces the start of those changes to a sequence from last season.

“I think the first step was going on the road and winning at Maryland," Allen said. “We had to get a stop and Reese got the interception to seal the win. Then we went on the road and won at Nebraska and then we got the overtime win over Purdue. Each one of those started changing the way we thought.”

When Allen accepted the defensive coordinator post following the 2015 season, his home-state Hoosiers were best known for their ability to win shootouts.

He inherited a defense that allowed nearly 38 points per game, 117th out of 128 in the FBS; in Allen's first season, Indiana nearly jumped into the top 50. In 2017, the goal was to place among the top 25 and today, Allen talks about making the top 10.

While the aspirations continue to climb, Allen's language never changed.

Not after head coach Kevin Wilson was fired weeks before Indiana's 2016 bowl game. Not after Indiana fell one win short of bowl eligibility in 2017 and 2018. Not even after Tennessee used an onside kick to rally for a win in January's Gator Bowl.

Instead, Allen kept insisting Indiana could turn things around with a group of confident, committed, play-making athletes — as Taylor proved in an instant Allen will never forget..

“Belief is a powerful thing, that's why ever since I stepped foot on this campus even as the defensive coordinator, it's always been about believing," Allen said. “If you don’t believe then you need to just hit the road. It’s what I said to the defense in 2016. It's what I said to our team in 2017, and we're just going to continue to clench our fist and grit those teeth and fight and fight and fight."

By Ralph D. Russo 35 minutes ago
By Pat Graham 2 hrs ago
By Tanner Marlar 8 hrs ago
By Steve Reed 9 hrs ago
By Michael Marot 10 hrs ago