No. 10 Indiana's Tuttle awaits challenge at No. 18 Wisconsin 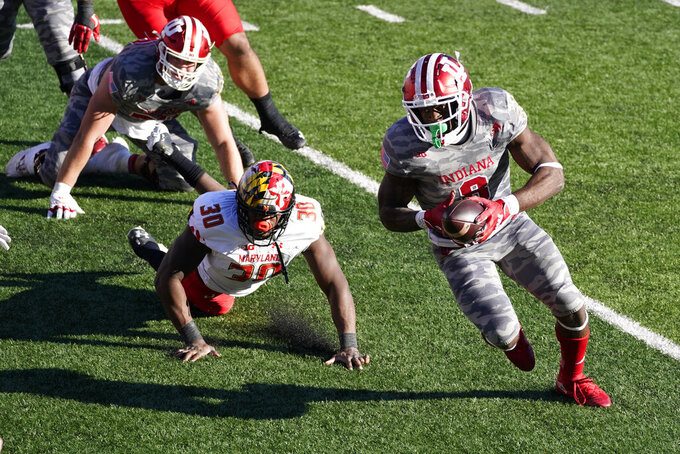 Indiana’s Jack Tuttle says his sudden role change won’t alter his approach as he tries to make sure the Hoosiers withstand the loss of star quarterback Michael Penix Jr.

Tuttle will make his first career start Saturday when the 10th-ranked Hoosiers (5-1, No. 12 College Football Playoff ) visit No. 18 Wisconsin (2-1, No. 16 CFP). A victory would enable Indiana to tie a program record by earning its sixth Big Ten win of the season, matching the accomplishments of the 1967 and 1987 teams.

“It’s kind of the same for me,” said Tuttle, a transfer from Utah. “Every week I try to prepare like I’m the starter, and every week we put on earmuffs and blinders and try to get prepared for the next opponent.”

Indiana has lost its last 10 meetings with Wisconsin and hasn’t beaten the Badgers since 2002. The Hoosiers’ chances of ending that streak became much tougher with this week’s news that Penix will miss the remainder of the season after tearing an anterior cruciate ligament.

Penix was injured Saturday during the Hoosiers’ 27-11 victory at Maryland. Tuttle took over for Penix and went 5 of 5 for 31 yards with a two-point conversion pass.

While Indiana deals with Penix's injury, Indiana is at full strength at the quarterback position.

“Each week Jack has been able to progress,” Chryst said. “It's been a little bit of a long road for him, but each week he's been able to do more. I do anticipate him being able to dress this week.”

Wisconsin lost 17-7 to Northwestern in its most recent game and then had last week off because its scheduled matchup with Minnesota was canceled due to a COVID-19 outbreak within the Gophers’ program.

That gave the Badgers extra time to prepare for Indiana. Tuttle will face a major challenge from a Wisconsin defense allowing the fewest yards per game (233.3) and third-fewest points per game (11.7) of any Football Bowl Subdivision team.

Tuttle says the Hoosiers will be ready.

A win this weekend almost certainly would keep Indiana in the Top 25 for a record-tying seventh straight week. Indiana last achieved that feat in 1945. It also would tie the 1945 team’s record for most wins over ranked teams in one season (three).

Indiana introduced a new offensive concept last week, directly snapping the ball to running backs in some short-yardage situations. It worked well against Maryland and seemed to give the struggling ground game a spark.

“You’re always looking for a way in a given week to give yourself an edge and we felt that was the case (against Maryland),” Indiana coach Tom Allen said. “We thought it gave us some momentum and you’d like to build off those things and find creative ways to run the football and even throw out of that look.”

Wisconsin’s secondary won’t have starting cornerback Rachad Wildgoose, who injured his shoulder in the loss to Northwestern and announced last week he would be entering the NFL draft.

Wisconsin’s offense has received a boost from two true freshmen.

Jalen Berger didn’t play in Wisconsin’s season-opening victory over Illinois but has led the Badgers in rushing in each of their last two games. He has rushed for 180 yards on 30 carries during that stretch.