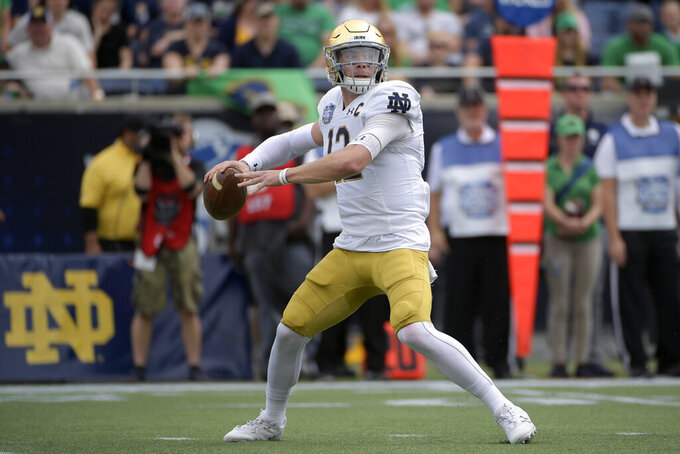 After finishing 2019 with an 11-2 record following a 33-9 victory over Iowa State in the Camping World Bowl, Notre Dame gave up its independence for the first time in its 133-year football history after COVID-19 impacted its original schedule. The Fighting Irish, members of the Atlantic Coast Conference in all sports other than hockey, will be eligible for the title as they begin a 10-game league schedule against a Blue Devils team coming off a 5-7 campaign.

Duke: QB Chase Brice. A graduate transfer from Clemson, Brice beat out Chris Katrenick and Gunnar Holmberg in camp. With the Tigers, Brice completed 60% of his passes for 1,023 yards and nine TDs and rushed for 187 yards and one TD in 25 games.

Notre Dame: S Kyle Hamilton. The 6-foot-4, 219-pound sophomore finished with 41 tackles and a team-high four interceptions (one for a touchdown) during his 2019 freshman campaign. He will anchor a rebuilt secondary that graduated four players to NFL rosters.

Duke is 9-3 in season openers under coach David Cutcliffe, while Notre Dame is 8-2 under coach Brian Kelly. … The Blue Devils beat Irish 38-35 in South Bend during the midst of a 4-8 Notre Dame campaign in 2016. … The Irish are 33-6 since then and are picked to finish second behind No. 1 Clemson in the ACC regular season. Duke is predicted to finish 12th out of the 15 schools. … The Irish have an 18-game winning streak at Notre Dame Stadium, which will be filled to a quarter of its 77,622 capacity because of COVID-19. Only Clemson (23), Ohio State (21) and UCF (20) have longer home streaks among FBS schools.