No. 10 Oklahoma looks to get defense on track against Baylor 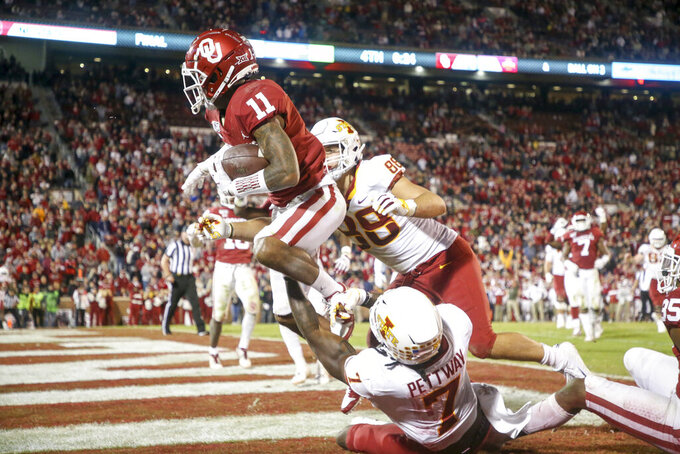 NORMAN, Okla. (AP) — The persistent concern about Oklahoma's defense has returned to the front of the picture of the Sooners' season.

Last year, the Sooners fired their defensive coordinator and eventually posted some of the worst numbers in school history. Oklahoma hired Alex Grinch, and a turnaround appeared to be in the works when the Sooners went six straight games without allowing more than 27 points.

The past two games have seemed more like last year. Oklahoma gave up 48 points against Kansas State, and then 41 against Iowa State.

The 10th-ranked Sooners (8-1, 5-1 Big 12) will learn even more about their defense during a stretch run of tough competition, starting with Saturday's game against No. 12 Baylor (9-0, 6-0). The Sooners will know soon if their past two games are a blip or part of a regression.

"That will be defined at the end of the year," Oklahoma coach Lincoln Riley said. "That'll be defined. Things that we did, how well we've played for a large stretch of this year, happened. The fact that we haven't played our best the last two weeks, happened. And how are we going to respond? And if (the defense) is different and it is better — and we believe it is — then it will show up here the rest of the season. That's our challenge."

Oklahoma gave up 477 yards in Saturday's 42-41 victory over Iowa State, and Brock Purdy threw five touchdown passes and ran for another score. Some players said it felt like they lost in the locker room after the game.

"Obviously we have a standard," defensive lineman Neville Gallimore said. "We play our game, and we're trying to meet that standard. When we don't meet that, it's frustrating at times. It just goes back to what we plan to accomplish.

"Getting the win was great. But according to our standard and how we wanted to get it done, it didn't happen."

Perhaps the most difficult statistic for the Sooners is their inability to force a turnover in either game. Riley said some of the Sooners might be pressing too much, especially given the emphasis Grinch has put on takeaways.

The one positive Riley could point to from Saturday's victory was a big play by the defense at a key moment. Parnell Motley intercepted what would have been a game-winning 2-point conversion pass from Purdy.

"We obviously got a critical one there at the end of the game that was great — but definitely, some things we need to do better," Riley said.

Gallimore likes the opportunity the Sooners have to redeem themselves against the unbeaten Bears.

"You always look forward to big-time games like this," he said. "Me, personally, it's a game during crunch time. An opportunity to show out. A great environment against a team that is undefeated. They're going to bring it. We got to make sure we have the dog in us and show up on game day."

Both were hurt against Iowa State. Sermon injured his left leg, while Mann's injury was undisclosed.