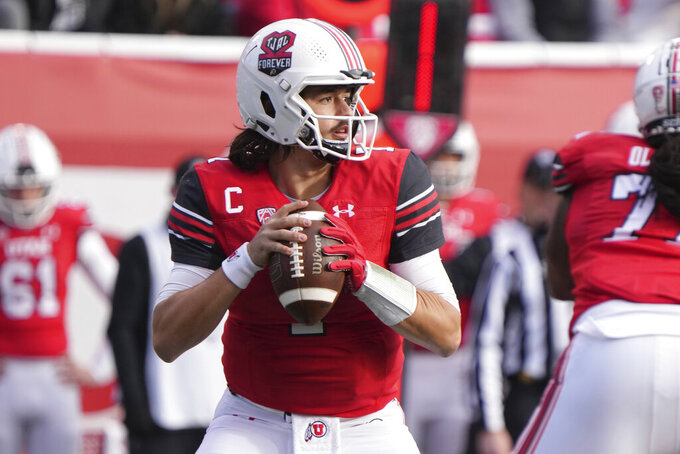 Utah quarterback Cameron Rising (7) looks to pass the ball in the first half of an NCAA college football game against Colorado, Friday, Nov. 26, 2021, in Salt Lake City. (AP Photo/George Frey)

Line: Utah by 2½, according to FanDuel Sportsbook.

The Ducks are seeking to become the first team to win three straight Pac-12 titles and make it to the Rose Bowl. The Utes are seeking their first Pac-12 championship in their third trip to the title game and first Rose Bowl appearance.

Oregon RB Travis Dye vs. Utah LB Devin Lloyd. Dye is one of the most dynamic running backs in the conference, ranking second in the Pac-12 with 16 TDs, including 13 in the past seven games. Lloyd is one of the top defensive players in the country with 22 tackles for loss. That's second in the nation to Will Anderson's 28 for Alabama.

Oregon: QB Anthony Brown leads the Pac-12 with 264.8 yards of total offense per game with 16 TD passes, four INTs and nine TD runs. Brown struggled in the first meeting against Utah, completing only 48.6% of his passes for 231 yards and being held to 8 yards rushing.

Utah: QB Cam Rising has 17 TD passes and only three INTs this season and helped turn the Utes season around when he took over as starter after a 1-2 start. Rising has also rushed for 346 yards and five TDs and has helped the Utes lead the Pac-12 in scoring in conference games.