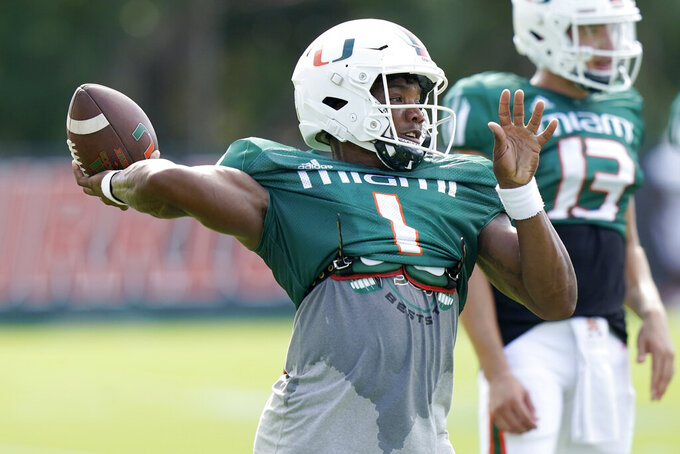 Here are things to watch in the Atlantic Coast Conference in Week 1:

No. 10 North Carolina at Virginia Tech. The Tar Heels, ranked higher in the preseason than in any season since they were No. 7 in 1997, are favored to win the Coastal Division, but have a big hurdle out of the gate at Virginia Tech. The Hokies haven’t played in front of a full Lane Stadium in 647 days, and their fans especially like weeknight games in the national spotlight. UNC quarterback Sam Howell is one of the best in the country, and has thrown eight touchdown passes in two prior games against Virginia Tech, including five in a six-overtime loss when the Tar Heels visited two years ago. Opening games don't often factor heavily in a conference divisional race, but this one could prove an exception. Two other games will likely get more national attention: No. 3 Clemson and No. 5 Georgia in Charlotte, North Carolina, and No. 14 Miami and defending national champion and top-ranked Alabama in Atlanta.

Miami QB D’Eriq King vs. No. 1 Alabama's defense. King has passed all the rehab tests on his surgically repaired right knee, and will be making his 34th career start for the Hurricanes. The dual-threat sixth-year senior leads all Bowl Subdivision quarterbacks with 73 career touchdown passes, and will likely need to add to that total against a Crimson Tide team defense that usually retools instead of rebuilds. The Tide lost more on offense, and is loaded at linebacker.

The ACC led all conferences by having 13 former quarterbacks make at least one NFL start in 2020, and the league begins this season with the three most prolific touchdown passer in the Bowl Subdivision. After King, who transferred to Miami after two seasons at Houston, Florida State's McKenzie Milton — a trasnfer who played three seasons at Central Florida — has 72 TD throws and North Carolina's Sam Howell has 68. Howell's next touchdown pass will make him the Tar Heels' career leader.

Milton. The former UCF quarterback led the Knights to two unbeaten seasons and a 27-6 record before a gruesome knee injury sidelined him for two seasons. He's declared himself healed after dislocating his right knee and suffering ligament, nerve and artery damage, making him likely the most important of 14 transfers coach Mike Norvell brought in to revive the program.