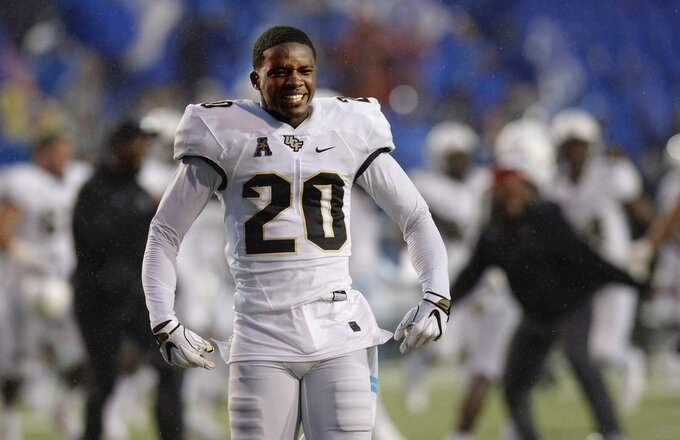 GREENVILLE, N.C. (AP) — No. 10 UCF made it through its first close call of the season. The Knights figure to have an easier time with East Carolina.

UCF looks to extend the nation's longest winning streak to 20 games Saturday night when it visits the struggling Pirates.

Memphis gave the Knights their best shot last week, and first-year UCF coach Josh Heupel is counting on the same thing from ECU — a three-touchdown underdog.

"Expect that same type of output from East Carolina this Saturday," Heupel said. "You've got to match it when things aren't going well. Just staying the course."

The Knights (6-0, 3-0 American Athletic Conference) appeared headed for their first loss since 2016 when Memphis jumped out to a 16-point lead. But UCF held the Tigers scoreless in the second half while scoring the final 17 points of a 31-30 victory that kept their perfect season intact but perhaps didn't come with enough style points.

As a result, they held steady at No. 10 following a tumultuous weekend for some other Top 25 teams.

"We talked about adversity, we talk about being in tough situations," Heupel said. "If you go win championships, you look back and there's going to be a couple ball games for sure, they're just going to be tight ball games."

It's been a rougher couple of years for the Pirates (2-4, 0-3), who enter having lost three of four, haven't beaten a Top 25 team in four years and haven't beaten a ranked conference opponent since they joined the American.

They'll start Holton Ahlers at quarterback for the first time, with the highly regarded freshman earning his shot at a position where there hast been little separation all season between three candidates.

"Holton does not have a leash this week. I am taking it off," coach Scottie Montgomery said. "He will play as long and hard as he can. With Holton, we all have to realize that there will be some bad plays in there but also some really good ones. We will have to work through it, as he is a true freshman starting at quarterback. I am looking forward to him playing a lot."

Some things to look for when No. 10 UCF travels to East Carolina.

This is quite a two-game stretch for East Carolina, which had to deal with the American's best defensive player — Houston's Ed Oliver — last week and now must handle its top offensive player in UCF QB McKenzie Milton. "When you play against two of the top players in the country in Ed Oliver and McKenzie Milton, it's definitely not something you look forward to doing," Montgomery said, adding that he hopes for some turnabout. "In a few weeks, I am hoping you all ask me questions in regard to what it is like going against Holton Ahlers and I can tell you that it's not good."

Turnovers will once again be critical. UCF ranks seventh nationally with a turnover margin of plus-1.33. The Pirates rank next to last in the American in turnover margin, with an average of minus-1.17. They've thrown eight interceptions in six games while the Knights have picked off eight passes.

The Knights' 19-game winning streak is already a school and conference record. A win would give them eight consecutive road victories, which would be another school record.

East Carolina's last victory over a Top 25 opponent came against No. 25 North Carolina in 2014. Its last league victory over a ranked team came in 2009, when the Pirates were in Conference USA and beat No. 18 Houston in the league championship game. Their last top-10 win came a year earlier, when they knocked off No. 8 West Virginia a week after stunning 17th-ranked Virginia Tech in Charlotte.