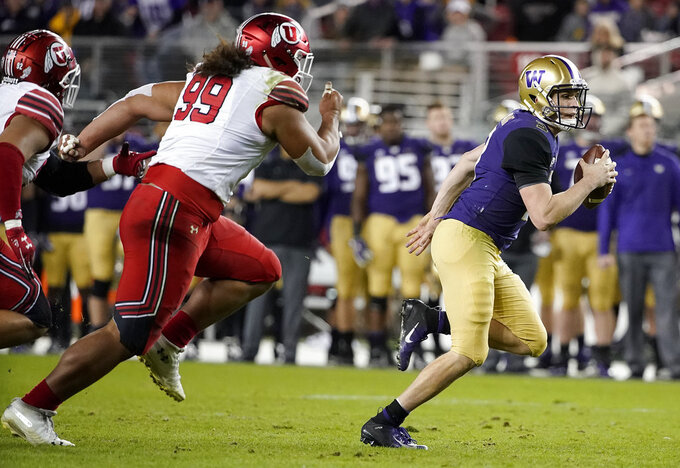 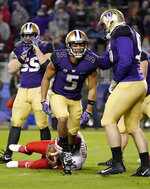 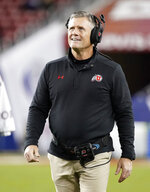 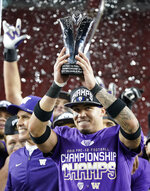 SANTA CLARA, Calif. (AP) — On a night when neither offense could do much of anything, it was only fitting that a pass that bounced off a receiver's hands and leg turned into the winning play.

Byron Murphy returned a deflected interception 66 yards for the game's only touchdown to lead No. 10 Washington to a 10-3 victory over No. 17 Utah in the Pac-12 championship game Friday night and a berth in the Rose Bowl.

"You know, life isn't easy. A Pac-12 championship, is not going to be easy," coach Chris Petersen said. "It's not reality. If it happens, go buy lottery tickets because it's not going to be like that. That's just luck. It is a grind, it's hard."

The matchup between the two stingiest defenses in the conference lived up to the billing with Washington (10-3, No. 11 CFP) holding Utah (9-4, No. 17 CFP) to 188 yards and both offenses limited to just one field goal apiece all game.

That's why it was up to the defense to come up with the score for the Huskies.

Jason Shelley's pass hit Siaosi Mariner in the hands inside the Washington 35. But Mariner couldn't hold onto the pass and it ricocheted off his leg and into the hands of Murphy, who raced 66 yards for the score that made it 10-3.

"The ball came up and I just knew I had to make a play," Murphy said. "The opportunity was there. I just had to make sure I took it."

Jordan Miller intercepted another pass from Shelley on the following drive and Murphy got his second interception of the game the next time Utah had the ball. The Huskies sealed the victory with a fourth-down stop in the final minute to earn a trip to Pasadena.

"They play the kind of game we want to play," linebacker Ben Burr-Kirven said. "They play a physical brand of football. They want to run the ball down our throats and I think we're built to play that kind of game."

Murphy broke up the final pass on a throw to Mariner that the Utes thought should have been called pass interference.

"Everybody's hurt," Shelley said. "We were that close. We played that bad and we still lost by only seven points."

The Huskies had four drives of at least 10 plays but got only one field goal out of those. They were stopped on a fourth-and-6 from the Utah 23 on the opening drive, threw an interception in Utah territory on the third drive and had a field goal blocked in the fourth quarter.

The one score came on Peyton Henry's 29-yard field goal late in the first half.

"It's really hard to describe because we're so excited about our defense out there and in some ways frustrated on the other side," Petersen said. "We just couldn't get things done like we needed to."

That Utes tied it with a score on the opening possession of the third quarter when Matt Gay's 53-yard field goal just cleared the cross bar but couldn't get anything else.

Utah: The Utes made it to the title game despite losing quarterback Tyler Huntley and running back Zack Moss to injuries in a four-day span in early November. They then lost leading receiver Britain Covey to what appears to be a serious knee injury in this game.

Shelley and Armand Shyne stepped in and let the Utes to three straight wins and a spot in this game but they weren't good enough against the Huskies. Shelley's three interceptions were his first turnovers as a starter. He threw for just 137 yards. Shyne ran for 37 yards on 11 carries.

"It's hard when you lose a game and you don't give up a defensive touchdown," coach Kyle Whittingham said. "It doesn't happen very often. But give the Huskies credit, because there's a reason we didn't do much on offense."

Washington: The Huskies came into the season with playoff hopes but a season-opening loss to Auburn and then a pair of losses to Oregon and California in October ended that quest. But Washington still managed to win the conference and will go to the Rose Bowl for the first time since the 2000 season.

Utah: Bowl game to be determined.