No. 11 Baylor needs 3 OTs against TCU to stay undefeated 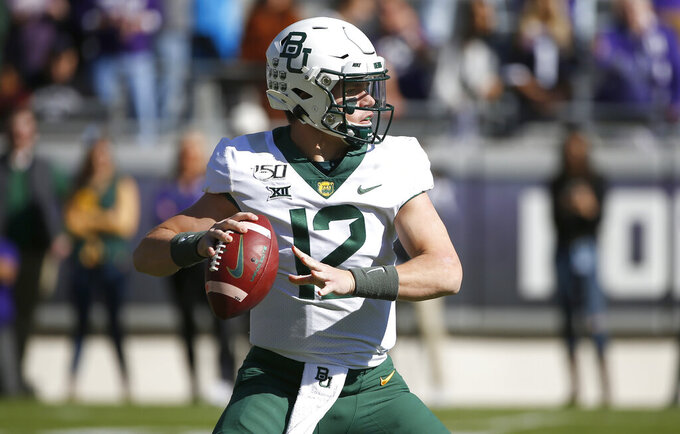 Baylor quarterback Charlie Brewer (12) looks to throw against TCU during the first half of an NCAA college football game, Saturday, Nov. 9, 2019, in Fort Worth, Texas. (AP Photo/Ron Jenkins)

FORT WORTH, Texas (AP) — No. 11 Baylor needed a 51-yard field goal in the closing minute of regulation just to keep playing. The Bears were then celebrating after the first overtime, thinking the game was over before a replay review gave TCU a touchdown on an incredible leaping catch.

The Bears finally had their 11th consecutive victory and remained undefeated when Grayland Arnold came down with a fourth-down interception in the end zone in the third overtime for a 29-23 win over TCU on Saturday.

"There were a lot of times in that game where a lot of the world probably thought we were going to lose just from the situations we were in," Arnold said. "Once we got that second chance, we were like we've got another opportunity to play football."

Charlie Brewer ran for a 3-yard touchdown in the first overtime before throwing TD passes in the next two extra periods to Denzel Mims — a lunging and reaching grab for a 20-yard score on fourth down in the second overtime before a leaping 4-yarder that won it for the Bears (9-0, 6-0 Big 12, No. 12 CFP).

"I knew it was crunch time and it was time for like grown-man football," said Mims, whose three catches in overtime matched his three in regulation.

Arnold picked off Max Duggan's fourth-down pass in the end zone. That came six plays, and a facemask penalty that put the ball at the 1, after Duggan's scramble and spinning move along the sideline on what was initially ruled a 20-yard touchdown before replay review showed he stepped out at the 3.

"We're just a tough, hard-nosed, resilient group of guys that goes out there and just competes and plays," Baylor coach Matt Rhule said. "We're not perfect, but a lot of teams would have lost that game today."

After Brewer's 3-yard TD run to start overtime, the Bears were already celebrating a victory when officials initially ruled that Te'Vailance Hunt came down out of bounds on the fourth-down play. But the replay showed Hunt came down with his hand in bounds before the rest of his body fell outside the end zone, resulting in a 24-yard touchdown for TCU (4-5, 2-4).

Just to get to overtime, Baylor needed John Mayers' 51-yard field goal with 36 seconds left in regulation. The ball just cleared the crossbar to tie the game at 9-9.

"This is probably the most disappointed I've ever been, but I'm also real proud of our kids because it hurts more when you do something like we have a ballgame like this," TCU coach Gary Patterson said.

This is the seventh time in two seasons that Baylor has won after a fourth-quarter comeback. This was the fourth this season — all in Big 12 games. They Bears have won 11 games in a row since losing to TCU last November.

All the scoring in regulation came on six field goals. The teams combined for five touchdowns in overtime.

"Winning is never ugly," Rhule said. "I've lost a lot, and I'll take this any day of the week."

TCU led 9-0 after Jonathan Song had two field goals at the end of the first half. He kicked a 37-yarder with 29 seconds left before TCU squib kicked and the ball bounced off Baylor freshman linebacker Trystan Slinker. Derius Davis recovered at the Baylor 24, setting up Song's 31-yard kick on the last play.

Rhule initially sent freshman Noah Rauschenberg, who generally takes longer attempts, out to kick at the end of regulation. But the coach then called timeout, conferred with his coaches and brought Mayers after realizing there was a little wind behind them.

"Let's go with the guy who got us here," Rhule said.

Mayers had field goals of 36 and 24 yards for Baylor after halftime. He had a 32-yard attempt in the second quarter that clanked off the left upright to end a 15-play, 80-yard drive over more than 7 minutes that included a fake punt, but Rhule said the Bears checked out of a fake field goal just before Mayers kicked.

There is a chance Baylor could move up a spot into the Top 10, but any movement by the Bears will be determined by the outcomes of games matched ranked teams.

Baylor: The offensive struggles continued for the Bears, the Big 12's last undefeated team. They managed only 294 total yards — 90 of those coming in the in overtime only 10 days after winning a game with fewer than 20 points for the first time in 13 years.

TCU: Duggan played with tip of his injured middle finger on his throwing (right) hand heavily taped up for protection. The freshman was 14 of 32 passing for 140 yards with two interceptions — one of a floater and the other through the hands of a receiver. He also ran 14 times for 46 yards.

Baylor is home next Saturday for a huge Big 12 game against No. 9 Oklahoma, the four-time defending conference champion.

TCU is back on the road to play Saturday at Texas Tech.