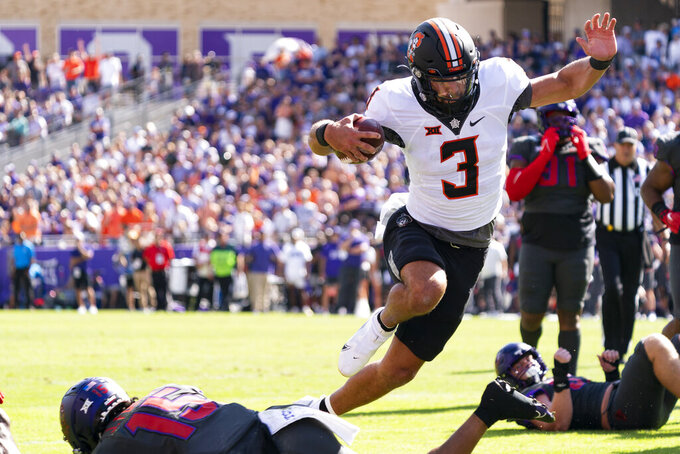 Oklahoma State quarterback Spencer Sanders (3) runs for a touchdown during the first half of an NCAA college football game against TCU in Fort Worth, Texas, Saturday, Oct. 15, 2022. (AP Photo/Sam Hodde)

Line: Texas by 6 1/2, according to FanDuel Sportsbook.

Oklahoma State and Texas are trying to remain in the hunt for a spot in the Big 12 title game. TCU and Kansas State are unbeaten in league play, so a second league loss could be costly for either team. Texas has won three straight and wants to keep its momentum going. The Longhorns' losses are by a point to Alabama and in overtime to Texas Tech. Oklahoma State is coming off a double-overtime loss to TCU and wants to bounce back.

Texas: RB Bijan Robinson. He leads Big 12 players with 111.4 yards rushing per game and could take pressure off Ewers. He ran for 135 yards and two touchdowns in last year's meeting with the Cowboys.

Oklahoma State: QB Spencer Sanders. The dual threat averages 324.7 yards of total offense per game, but he has completed under 50% of his passes in each of his last two games. But even if he struggles to pass, he has 309 yards and eight touchdowns rushing this season.