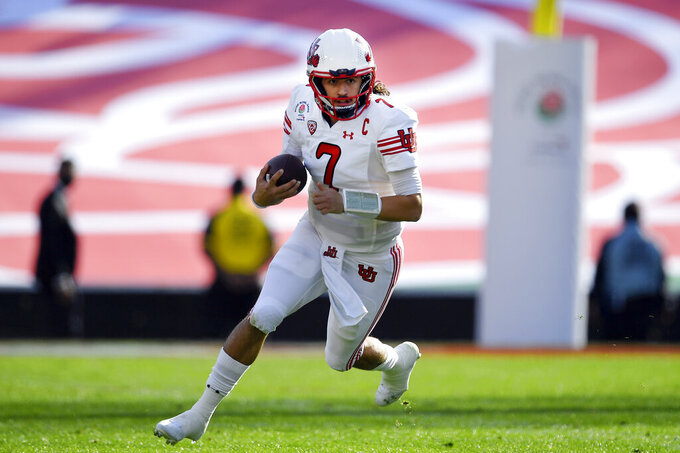 FILE - Utah quarterback Cameron Rising runs during the first half in the Rose Bowl NCAA college football game against Ohio State on Jan. 1, 2022, in Pasadena, Calif. Rising returns to the Utes after throwing for 2,493 yards and 20 touchdowns as a sophomore last season. Utah was picked to repeat as Pac-12 champions in the preseason media poll. (AP Photo/John McCoy, File)

No. 11 Oregon vs. No. 3 Georgia on Saturday in Atlanta. As nonconference games go, it doesn't get much bigger in the Pac-12 than one of the conference's best teams facing the reigning national champions. The first game under coach Dan Lanning will be a huge test for the Ducks against a loaded Georgia team that could be a barometer for the Pac-12's College Football Playoff chances. Lanning was an assistant under Georgia coach Kirby Smart the previous four seasons before landing in Eugene, so he knows how ferocious the Bulldogs' defense can be. Oregon is one of eight FBS schools to return all five starting offensive linemen, which should help, but Lanning has yet to name a starting quarterback. Former Auburn QB Bo Nix is considered the frontrunner.

No. 7 Utah at Florida on Saturday. The Utes were picked to repeat as Pac-12 champions and have loads of talent returning, including quarterback Cam Rising and running back Tavion Thomas. The Gators are rebuilding, but Utah's first true road game against an SEC opponent in 38 years doesn't figure to be easy; Florida has won 32 straight home openers, the longest active streak in FBS. Keep an eye on Utah linebacker Mohamoud Diabate, who transferred from Florida after leading the Gators with 89 tackles last season.

Kalen DeBoer will make his debut as Washington's coach when the Huskies host Fresno State on Saturday. He was Fresno State's coach the previous two seasons and takes over for Jimmy Lake. ... The two Arizona schools will have new quarterbacks to start the season, both via transfer. Emory Jones will be the Wildcats' starter at San Diego State after transferring from Florida, and former Washington State QB Jayden de Laura will lead the Sun Devils against Northern Arizona on Thursday. ... Stanford has five offensive linemen with a combined 101 starts heading into Saturday's game against Colgate.

Caleb Williams, Southern California. Trojans coach Lincoln Riley boosted his chances of having a successful first season by bringing Williams with him from Oklahoma. The dual-threat quarterback was the only FBS freshman to have 20 touchdowns passing and five rushing last season, and is among the Heisman Trophy favorites this year.

Boise State over Oregon State on Saturday. The Beavers are 2 1/2-point favorites, according to FanDuel Sportsbook, but the Broncos have won the past three meetings. The key will be stopping Oregon State's running game. The Beavers averaged 212.4 yards per game last season and have another talented backfield.