No. 12 Baylor keeping it close and undefeated with OU next 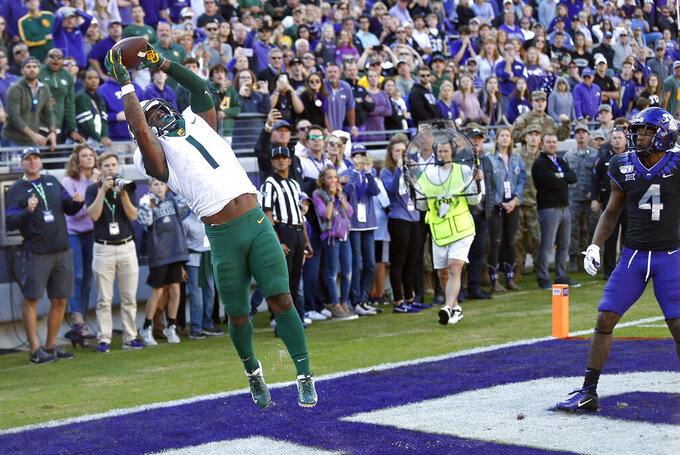 No. 12 Baylor is the Big 12's only undefeated team, and people are finally starting to pay attention with four-time defending conference champion and No. 10 Oklahoma up next.

There are all those close wins for the Bears (9-0, 6-0 Big 12), including the latest in triple overtime at TCU when they had to make a 51-yard field goal in the final minute of regulation just to keep playing. It was the fourth time in their conference games that they trailed in the fourth quarter, including a double-overtime home win over Texas Tech.

"I told our guys in there, the story line is going to be, no disrespect, they're going to talk about us all week what we're not," coach Matt Rhule said after the 29-23 win at TCU. "That's what happens when you get up here, when you get to be ranked, everyone has to find your flaws."

Then the script got flipped by the coach, who has taken the Bears from their first 11-loss season in his debut two years ago in the wake of a sexual assault scandal that led to two-time Big 12 champion coach Art Briles getting fired.

"Let's talk about what we are. We're just a tough, hard-nosed, resilient group of guys that goes out there and just competes and plays," Rhule said. "We're not perfect, but a lot of teams would have lost that game (Saturday)."

ESPN will be doing its three-hour "College GameDay" show from the banks for the Brazos River outside Baylor's campus stadium Saturday morning. The game between the Bears and Sooners will be played in prime time on network television.

Baylor, which has won 11 games in a row, and Oklahoma (8-1, 5-1) were both actually down one spot in the new AP Top 25 poll Sunday, with the Bears still one spot below two-loss Florida. Minnesota (9-0) jumped six spots to No. 7 after its win over Penn State, which slipped four to No. 9.

The Bears are the lowest ranked of the five remaining undefeated FBS teams, behind No. 1 LSU, No. 2 Ohio State, No. 3 Clemson and the Golden Gophers.

"The season's a grind and you've got to take it week by week," Baylor junior quarterback Charlie Brewer said.

Oklahoma held on at home to beat Iowa State 42-41 on Saturday night, when the Cyclones were unsuccessful on a 2-point conversion try in the final minute after overcoming a 42-21 halftime deficit.

Iowa State also had a second-half surge against Baylor in the Big 12 opener Sept. 28 in Waco, when the Cyclones scored three touchdowns in the fourth quarter to go ahead 21-20 before John Mayers kicked a 38-yard field goal with 21 seconds remaining for the first of Baylor's late comebacks.

Mayers had a 19-yard field goal to end regulation against Texas Tech before Baylor won that game. The Bears were down going into the fourth quarter at Oklahoma State, then scored three touchdowns in less than four minutes and won going away.

"You never know what can happen in a game, so we always expect it," said receiver Denzel Mims, who had two overtime TD catches against the Horned Frogs.

The comebacks don't even count the West Virginia game on Halloween night. The Bears were tied until Mayers kicked a 36-yard field goal with 10:19 left, and they blocked a WVU kick seven minutes later.

"We're a tough team. The Tuesday practices are really rough. Coach Rhule does a good job of putting us in situations where mentally it's messing with you in practice," said Grayland Arnold, who had the game-ending interception against TCU. "We're kind of prepared for the rough rides."