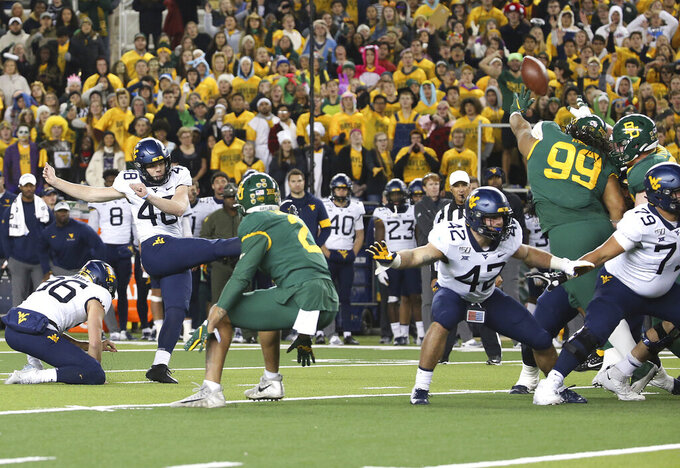 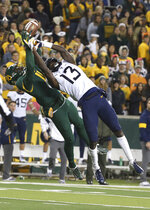 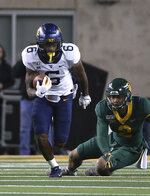 WACO, Texas (AP) — No. 12 Baylor got quite defensive to remain undefeated.

While Charlie Brewer threw for 277 yards with two touchdowns, the defense blocked a late field goal try while allowing only one big play, and the Bears won a game when scoring less than 20 points for the first time since 2006.

"A tremendous, tremendous defensive game," coach Matt Rhule said after the 17-14 victory over West Virginia on Thursday night. "We are still learning that it's OK just to play defense and not worry."

John Mayers kicked a go-ahead 36-yard field goal with 10:19 left to break a 14-all tie, and Baylor won its 10th game in a row despite an often frustrating night on offense and special teams.

Two seasons after winning only one game, the Bears (8-0, 5-0 Big 12) are the league's only undefeated team — and one of eight remaining among FBS teams.

"Don't apologize for going 8-0, for winning this game," Rhule said. "Just have to continue to improve as we try to move forward."

West Virginia (3-5, 1-4) had eight quarterback sacks. With second-and-goal from the 1 late in the second quarter, Baylor was stuffed for no gain on three consecutive plays and had to settle for a 7-0 halftime lead.

Still, the Bears avoided what happened last Saturday, when while they had an open date the Big 12's other three ranked teams that did play lost. That included Oklahoma's loss at Kansas State that left Baylor alone atop the conference standings.

"We talked about how this wasn't good enough," linebacker Jordan Williams said. "We need to grow from it because we don't want to have that same feeling those teams had."

After R.J. Sneed muffed a punt that was recovered at the Baylor 34, West Virginia couldn't get a first down.

Casey Legg kicked the ball through the uprights on a 43-yard field goal attempt, but the Mountaineers were penalized for delay of game and had to try again. Nose tackle Bravvion Roy then blocked Legg's 48-yard attempt with 3 1/2 minutes left.

The Mountaineers had two big plays for their touchdowns. George Campbell had an 83-yard catch-and-run from Austin Kendall on the first play after a punt, and Winston Wright went 95 yards for the Mountaineers' first kickoff return for a touchdown in five years.

West Virginia finished with 219 total yards, 136 outside of that one big play.

Wright's return was on the ensuing kick after Brewer's 21-yard TD pass to Denzel Mims, who had opened the second half by fumbling at the end of a 30-yard reception on his first catch since taking a hard hit early in the game.

West Virginia beat Baylor 58-14 last year, but the Mountaineers were coming off a 52-14 loss at Oklahoma in their last game and came into this game as a nearly three-touchdown underdog.

"A lot of guys hurt in that locker room. I hurt for them," first-year Mountaineers coach Neal Brown said. "I hurt because they invested. They came up short. I don't' know if we necessarily got beat, but we came up short."

Both teams had a starting safety ejected after targeting calls.

Josh Norwood, the leading tackler for West Virginia and with four consecutive games of at least 10 tackles, was flagged after the hit on Mims late in the first quarter.

Baylor's Chris Miller got penalized for a play against Kendall in the final minute before halftime. Miller is subject to an automatic one-game suspension because it was his third targeting penalty this season.

West Virginia: The Mountaineers have lost four Big 12 games in a row since opening conference play with a win at Kansas. The Big 12's worst offense again struggled to get anything done. With first-and-goal at the 10 on their first drive after halftime, Kendall was still calling out signals when the snap whiffed by his head. Kendall fell down, running back Leddie Brown couldn't get the rolling ball before defensive end James Lynch finally corralled it at the 37.

Baylor: The Bears have moved up 10 spots in the AP Top 25 since first getting ranked at the start of October. They may not have been their sharpest playing on a Thursday night for so many to see in a nationally televised game, but Brewer and Co. got another victory.

Baylor travels less than 100 miles north on Interstate 35 to play at TCU on Nov. 9.