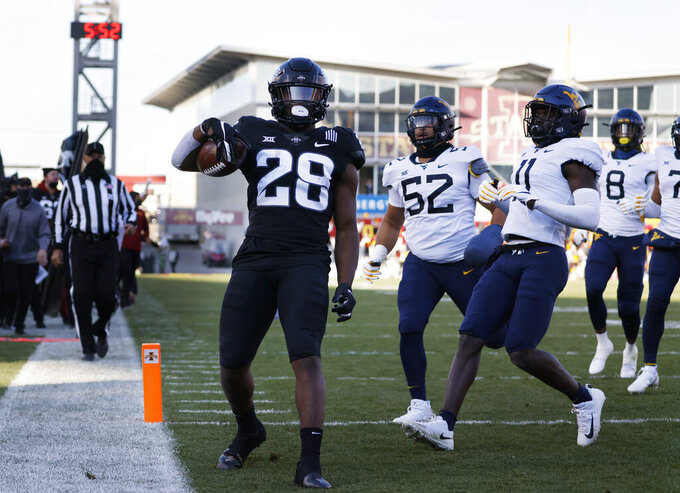 “Obviously, this team is very proud of what they were able to do,” Campbell said, “but there's also a sense of understanding there's more football to be played.”

The Cyclones (8-2, 8-1, No. 9 in the CFP) will make their first appearance in the Big 12 championship game Dec. 19 after finishing the regular season alone in first place. They'll play No. 13 Oklahoma, which secured its spot with a 27-14 win over Baylor.

Brock Purdy completed 20 of 23 passes for 247 yards and three touchdowns and was the catalyst for an Iowa State offense that finished with 483 total yards against the Big 12's top defense.

“I think I'm just playing my game, as far as not overthinking things,” Purdy said. “Just understanding what the defense does and what our play is, and getting the ball accurately to my guys.”

Two weeks after shutting out Kansas State, the Cyclones turned in another stellar defensive performance. They held the Mountaineers to 263 yards, marking the third straight year they've kept West Virginia under 300.

Reaching the championship game marks another milestone for Campbell, in his fifth season with the Cyclones. He took over a program that has not won a conference title in football since it was co-champion of the old Missouri Valley Conference in 1912.

The Cyclones’ eight conference wins are the most in program history, and their 31-18 record the last four seasons is the best four-year stretch in the modern era that started in 1928.

“It's special, that's for sure, because of where Iowa State has been," Purdy said. “We don't want to just get there. We want to win it.”

“We’ve been in every contest until the end of the game,” Mountaineers coach Neal Brown said. “That was definitely not the case. I don’t know if we were in this game past the first quarter, and they soundly beat us.”

West Virginia: The Mountaineers struggle when they can't get their run game going. They've averaged 211 yards on the ground in their wins and 64 in their losses.

Iowa State: The Cyclones will roll into the Big 12 championship game on a five-game win streak and play a rematch against an Oklahoma team they beat 37-30 on Oct. 3.

The feel-good story of Iowa State receiver Landen Akers came full circle when he scored his first career touchdown on a 2-yard pass in the second quarter.

The 23-year-old Akers, the oldest player on the team, was a two-star prospect who had no other Division I offers when he was coming out of high school in Cedar Rapids, Iowa. He was a member of former coach Paul Rhoads’ 2015 recruiting class and agreed to be a grayshirt, meaning he had to wait until January 2016 for a scholarship. He worked at a grocery store to help pay for his first semester. He’s been a backup receiver for four years and has made his biggest contributions on special teams.

Teammates mobbed him in the end zone when he finally scored in his 46th game.