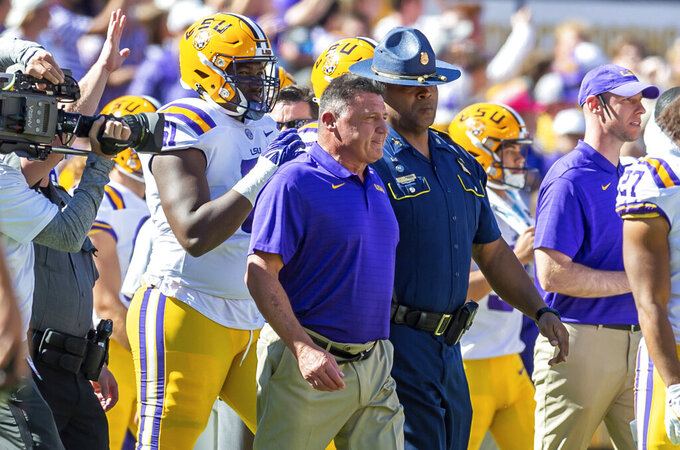 LSU head coach Ed Orgeron is escorted onto the field after LSU's 49-42 win over Florida in an NCAA college football game, Saturday, Oct. 16, 2021, in Baton Rouge, La. LSU and coach Orgeron have agreed to part ways after this season, according to multiple media reports Sunday, Oct. 17, 21 months after he led the Tigers to a national championship with what is considered one of the greatest teams in college football history. (Scott Clause/The Daily Advertiser via AP)

Lane Kiffin texted with his former assistant Ed Orgeron about a wild weekend because a call would have seemed “a little strange” with their teams about to play.

The past week has been more than a little strange for both programs heading into Kiffin and No. 12 Mississippi's game Saturday against LSU and Orgeron.

The biggest news came Sunday when LSU (4-3, 2-2 Southeastern Conference) announced that Orgeron's tenure will end after this season, less than two years removed from a national title.

“I do believe it gives the team some clarity that it’s done now," the Tigers coach said "Nobody has to talk about that no more. No one has to listen to that no more. Now we know what’s ahead of us.

“Now the focus can be on Ole Miss, and on football.”

That's perfectly fine with Kiffin and Ole Miss (5-1, 2-1), who are more worried about the health of quarterback Matt Corral.

Kiffin's return to Tennessee ended with a 31-26 win and some Volunteers fans pelting the field with objects.

Then came the news about Orgeron, a former Ole Miss head coach who worked for Kiffin at Tennessee and is 5-0 against the Rebels.

“It doesn’t make it awkward for me,” Kiffin said. “Just like last week, it seems like there’s something every week. Last week our preparation had nothing to do with me having coached there before and this week has nothing to do with my relationship with Coach O.”

Kiffin expressed pessimism about Corral's status for the game on Monday and didn't offer much insight after that. The Heisman Trophy candidate ran 30 times for a career-high 195 yards against Tennessee and left the game for one play late with an ankle injury.

“I’ve never spoke in detail about injuries, so I’m not going to start now except for what I always say, which is that we hope everyone plays,” Kiffin said. “That’s hope, so ...”

LSU struggled to run the ball through most of their first six games before suddenly putting forth a dominant performance on the ground against Florida last week.

Tyrion Davis-Price rushed for an LSU school record 287 yards in a 49-42 victory over Florida last week, surpassing the mark of 285 set by Derrius Guice in 2016.

“It feels like we have turned a corner,” center Liam Shanahan said. “We’re starting to play with more and more confidence. So, I’m looking forward to seeing us hopefully continue to build on that moving forward."

Added Kiffin: “I saw the back running people over looking like Leonard Fournette.”

If Corral can't go, he'll be replaced by an inexperienced passer — unless the Rebels opt to turn to wide receiver and former QB John Rhys Plumlee. Freshman Luke Altmyer replaced Corral briefly in the game, but is 0-for-4 passing this season. Sophomore Kinkead Dent, who is listed as the second-teamer, has completed 2 of 4 passes for 7 yards.

LSU defensive tackle Glen Logan returned from injury to play his first game this season last weekend and made three tackles in the Tigers’ victory over Florida.

“He and Glen are best friends,” Orgeron said. “They played with each other for years. They feed off of each other.”

HONORING ELI Ole Miss will retire the No. 10 jersey of former quarterback Eli Manning. Manning will join his father Archie Manning (18) and Chucky Mullins (38) as the only Rebels players with their jerseys retired.